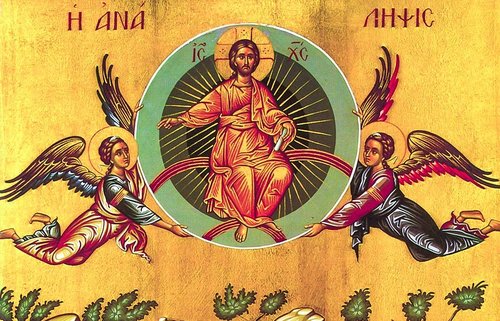 What Type of Person Is Jesus?

What Type of Person Are We?

(Based upon a sermon delivered on Ascension Thursday 2019 by the author.)

Jesus is also known as the Word of God. In the beginning of the Holy Gospel according to Saint John, it is written: “In the beginning was the Word, and the Word was with God, and the Word was God” (John 1:1). After affirming that Jesus is a Divine Person with a Divine Nature, St. John then proclaims: “And the Word was made flesh, and dwelt among us” (John 1:14). The Word was made flesh in the womb of the Blessed Virgin Mary by the power of the Holy Ghost at the moment of the Incarnation, which literally refers to the Word ‘becoming flesh.’ Hence, taking His Flesh from the Blessed Virgin Mary, Jesus also has the title of ‘Son of Man.’ We meditate upon the Incarnation during the First Joyful Mystery of the Rosary, the Annunciation.

At the Incarnation, the only-begotten Son of God, a Divine Person with a Divine Nature, took on a human nature. Then, from the moment of His Conception in the womb of the Blessed Virgin Mary, the Son of God is referred to as ‘True God and True Man.’ He did not become a human person, but He assumed a human nature. The Council of Chalcedon (Session 5) in A.D. 451 infallibly taught that Jesus became “like us in all things except sin” and that He “must be acknowledged in two natures unconfused, unchangeable, undivided, inseparable.”

The fifth General Council at Constantinople in A.D. 533 developed the term ‘Hypostatic Union’ to define that the two natures of Christ are joined in one Person and one hypostasis, meaning one substance.  Father John Hardon’s Modern Catholic Dictionary describes ‘Hypostatic Union’ as meaning: “the union of the two natures is real (against Arius), no mere indwelling of God in a man (against Nestorius), with a rational soul (against Apollinaris), and the divinity remains unchanged (against Eutyches).”

Jesus willingly took on a human nature so that He could suffer and die on the Cross to free us from our sins and open the gates of Heaven, which had been closed since the Original Sin of Adam and Eve. Hence, Jesus is also known as the sacrificial “Lamb of God…Who takest away the sin of the world” (John 1:29).

These are all concepts expressed in various ways during the Holy Sacrifice of the Mass, which makes the moment of our redemption present to us throughout time and space. ‘Who we are’ is also expressed in the Holy Sacrifice of the Mass. Traditionally, we are presented as sinners in need of redemption. Thus, at the Offertory, just before the Priest adds a drop of water into the wine prior to Consecration, he traditionally blesses the water, which symbolizes humanity, which is in great need of Divine grace. The wine, which symbolizes Christ, is not blessed, since Our Lord is in no need of a blessing. This symbolism has been removed from the New Mass (Novus Ordo) in that the Priest is no longer directed to bless the water.

As the drop of water is added to the wine, the Priest prays the following ancient prayer during the Traditional Latin Mass (English translation):

“O God, Who in creating human nature hast wonderfully dignified it, and still more wondrously reformed it; grant that by the mystery of this water and wine, we may be made partakers of the Divine Nature of Him Who vouchsafed to become a partaker of our human nature, namely Jesus Christ, our Lord, Thy Son, Who liveth and reigneth with Thee in the unity of the Holy Ghost, one God, world without end. Amen.” (Emphasis mine)

In the New Mass, with a great deal less precision, tending towards ambiguity, these words have been reduced to:

“By the mystery of this water and wine may we come to share in the Divinity of Christ Who humbled Himself to share in our humanity” (capitals D, W, and H are mine).

The Novus Ordo rendition of “… to share in the divinity of Christ who humbled himself to share in our humanity” could lead to the misunderstanding that we are somehow sharing in His Divine Personhood or that Jesus was a mere human person. The Traditional Latin Mass is clearly centered on God and is theologically exact in its liturgical formulas. To the extent that the New Mass appears to be centered on man, who is not God, it is contrary to centuries of our One, Holy, Catholic, and Apostolic Tradition.

At the Ascension, Jesus’ Human Nature is exalted, as His Divine Nature returns to Heaven with His Human Body, Blood and Soul, received at the Incarnation, to sit at the Right Hand of the Father. Thus, Holy Communion received in a state of grace elevates our human nature as we share in the Risen and Ascended Lord’s Body, Blood, Soul and Divinity. We do NOT ever become a Divine Person, but as human persons our human nature is elevated as we become “partakers of the Divine Nature” (2 Pet. 1:4). These thoughts may add a new dimension to one’s meditations on the Second Glorious Mystery of the Ascension.

As partakers of the Divine Nature, we do NOT become God, as certain persons misinterpret and mistranslate Sacred Scripture and the Fathers of the Church. We are not God and NEVER will be. That would make for more than One God, and as the Nicene Creed states: “I believe in One God …”

In summary, the answers to our two initial questions are:

Satan tempted Eve in the Garden of Eden by saying: “… you shall be as Gods …” (Gen. 3:5). The ‘smoke of satan,’ which has entered the Church, has led Modernist malefactors to replace God with man as the center of our Faith. Always remember that we are not Gods; and always remember my Three R’s of Modernism:  Recognize it; Refute it; and Return to Tradition.

Catholic Family News is pleased to post an announcement of a plea for all Traditional communities to join a consecration to the Immaculate Heart of Mary on August 15. Obviously such an effort will not satisfy Our...

Archbishop Viganò: This Threat, by Its Very Nature, is Destined for the Most Blatant and Devastating Defeat

Opening Speech for the Venice Document conference Speech of Archbishop Carlo Maria Viganò Dear friends,  Praised be Jesus Christ. This conference has the privilege of being based in a city with a glorious past, in...