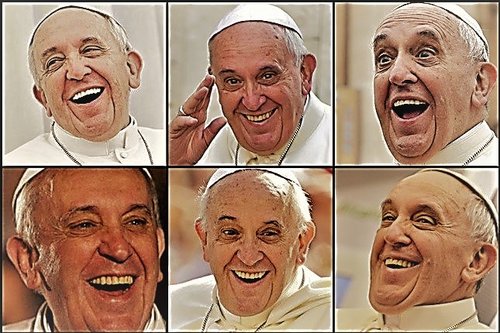 Pope Francis has finally replied to the Open Letter to the Bishops of the World and, as has become typical for this most bizarre of papacies, he has done so through an off-the-cuff remark in an interview with a journalist. According to Catholic News Agency, Pope Francis stated during a recent Spanish-language interview (released earlier this week) that he reacted “with a sense of humor” to the accusation of heresy made against him earlier this month. As CNA’s English translation reads, “It does not hurt me at all. Hypocrisy and lies hurt me, these hurt me. But such a mistake, where there are even people who have filled their heads with … no, please, you have to take care of them too”.

Yes, you read that correctly. The Sovereign Pontiff has been accused of the canonical crime of heresy and his reaction is to laugh. This is not a laughing matter. It would seem his sense of humor comes from his thinking that the dogmas of the Faith are not that important, an attitude that has pervaded his papacy.

Yet, based on past events and present circumstances—for example, the humiliating demotion of Cardinal Raymond Burke, the fact that Archbishop Carlo Maria Viganò feels the need to live in hiding, etc.—my guess is that this jolly indifference is likely a smoke screen. The Dictator Pope, to use the title of Henry Sire’s historic exposé, does not take opposition to his errors lightly, no matter what he tells the press. He carefully cultivates the public image of a lovable (albeit eccentric) grandfatherly figure while moving behind the scenes to promote his Modernist revolutionary cronies and punishing any who stand in his way of totally remaking of the Church in his image. It leads one to wonder what he means when he says he has to “take care of them too“.

In the same interview, Pope Francis expressed his intention to attempt to change the divinely instituted constitution of the Church as a monarchy. As CNA reports:

“I believe that the Church is changing, as shown by the attempts at reform that we are making,” he said.

“The Vatican City State as a form of government, the Curia, whatever it is, is the last European court of an absolute monarchy. The last. The others are now constitutional monarchies, the court is diluted. Here there are still court structures that must fall,” he said.

In stark contrast, his predecessor of truly blessed memory, Pope Leo XIII, wrote the following about the divine constitution of the Church as a monarchy in his 1896 encyclical Satis Cognitum (On the Unity of the Church):

“From this text [i.e. Matt. 16:18] it is clear that by the will and command of God the Church rests upon St. Peter, just as a building rests on its foundation. Now the proper nature of a foundation is to be a principle of cohesion for the various parts of the building. It must be the necessary condition of stability and strength. Remove it and the whole building falls. It is consequently the office of St. Peter to support the Church, and to guard it in all its strength and indestructible unity. How could he fulfill this office without the power of commanding, forbidding, and judging, which is properly called jurisdiction? It is only by this power of jurisdiction that nations and commonwealths are held together. A primacy of honor and the shadowy right of giving advice and admonition, which is called direction, could never secure to any society of men unity or strength.” (Satis Cognitum, n. 12)

Nevertheless, Francis asserts, “I believe that the Church is changing,” and, “The Vatican City State as a form of government, the Curia…is the last European court of an absolute monarchy. … The others are now constitutional monarchies, the court is diluted. Here there are still court structures that must fall.”

Ironically for Francis, the Church is already a constitutional monarchy, although not in the liberal post-French Revolutionary sense. It has a constitution given to it by Christ Himself—an unalterably monarchical constitution—which means that “by the will and command of God” (Leo XIII) the Pope, as Successor of St. Peter and Vicar of Christ, is forever established as the source of unity of faith, sacraments, and governance. In other words, the Papacy is necessarily a monarchy. Yet this monarchical structure, Francis says, “must fall.”

This same Spanish-language interview contains other significant bombshells—for example, the Pope’s assertion that “Catholics are happy to be united now,” in reference to his bad bargain with Communist China—but the statement that has caused the biggest stir is his denial of having any knowledge of Theodore McCarrick’s crimes prior to the credible accusation against the former cardinal was made public last June. This denial is, of course, a direct contradiction of Archbishop Viganò’s testimony from last fall.

In response to this denial—certain details of which the Vatican attempted to conceal —Archbishop Viganò doubled down and flatly accused Pope Francis of lying. He said in comments sent exclusively to LifeSiteNews:

“What the Pope said about not knowing anything is a lie. […] He pretends not to remember what I told him about McCarrick, and he pretends that it wasn’t him who asked me about McCarrick in the first place.”

Lying is another classic technique of dictators. From Hitler to Stalin to Peron (the latter being Francis’ political model, according to Henry Sire), they project an image of being a great reformer for the people, all the while lying about their behind-the-scenes terrors. Ironically, as Sire’s book points out, while attempting to cultivate an image as an anti-authoritarian revolutionary, Francis is one of the most arbitrary, dictatorial, totalitarian rulers ever to sit on the Chair of Peter. He talks of a constitutional monarchy while seeking to violate the constitution of the Church given by Christ Himself. He lies, according to Archbishop Viganò, to cover up his misdeeds and he laughs in the face of serious and well-documented accusations of heresy.

Through the intercession of Our Lady of Fatima, may God soon deliver His Church from the clutches of this Dictator Pope, who seems bent on subversion and destruction.

Christ is Risen! His Body, the Church, Will Also Rise!

April 2021 Edition Now Available – Preview HERE April 4, 2021Easter Sunday Dear Friends in Christ, Christ is risen! Indeed, He is risen! This traditional Easter greeting reminds us that the glorious Resurrection of Our...

(Image: The Resurrection of Christ by Nicolas Bertin, c. 1710) “And in the end of the sabbath, when it began to dawn towards the first day of the week, came Mary Magdalen and the other Mary, to see the sepulchre. And...