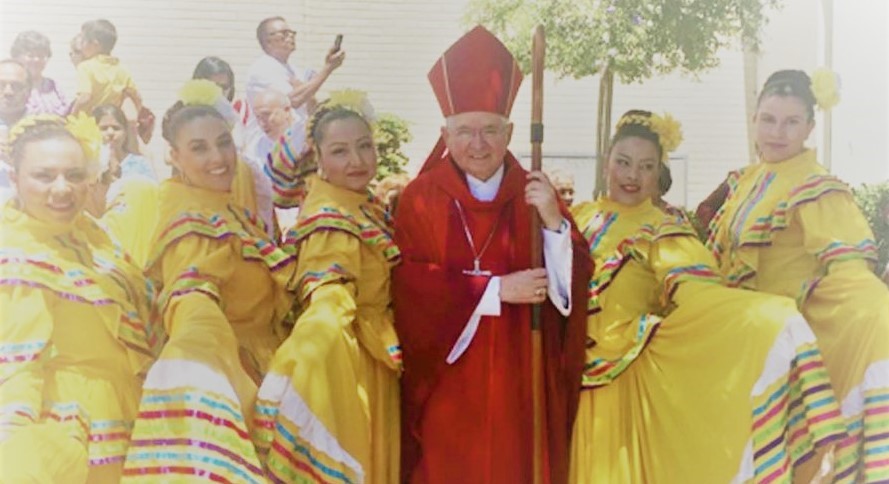 Archbishop José Gomez and the Church of Diversity

As reported by First Things magazine, the grand dame of Catholic neoconservatism, Archbishop José Horacio Gómez recently gave the commencement address for the Class of 2018 at the Catholic University of America (CUA), a current Newman Guide school which has, over the years, wavered back and forth between the poles of liberalism and conservative (but perhaps not traditional) orthodoxy. 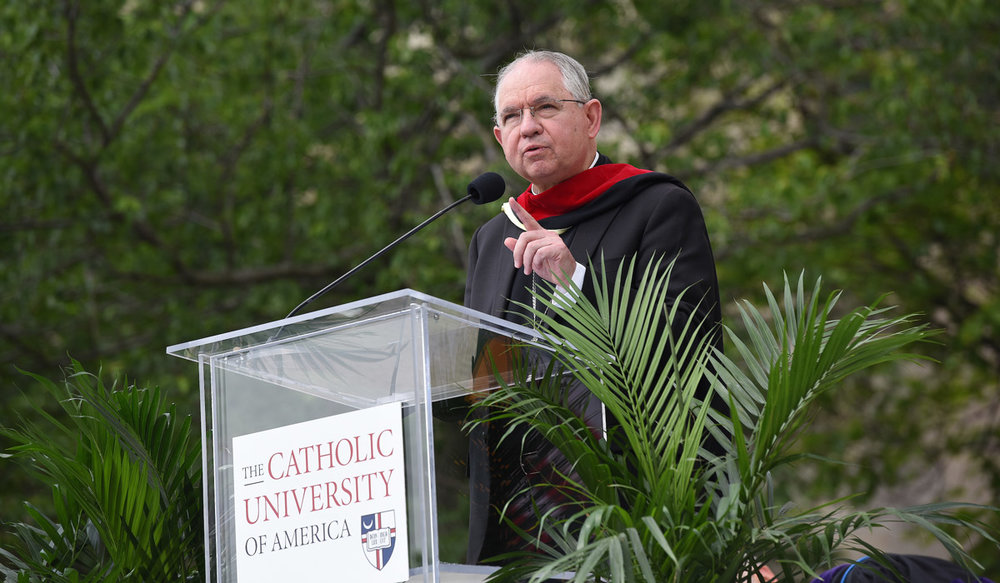 Upon first glance, His Excellency’s speech celebrating the multicultural Church in America is a timely reminder of the rich Catholic tradition of North America, which, with its French, Spanish, and indigenous roots, predates the Anglo-Saxon Protestant Enlightenment project of the United States of America.

Archbishop Gomez also rightly presents a litany of holy North American men and women in our country who do not have their ethnic roots in the British Isles.

Although mistakenly calling her a saint, he mentions Henriette DeLille, a Louisiana woman of mixed French and African descent who founded the Sisters of the Holy Family in New Orleans. DeLille was born in 1813, just ten years after the Louisiana Purchase, and His Excellency is justly drawing attention to the fact that the centers of Catholic culture in our country were often on the periphery of the wider WASP—White Anglo-Saxon Protestant—dominated nation.

Archbishop Gomez additionally raises awareness among CUA’s class of 2018 that there are many black Catholics in the United States—including, one might add, a notable contingent of “black Trads.”

The Archbishop of Los Angeles also mentions the oft-forgotten fact that many of the Plains Indians had converted to the Catholic Faith, specifically naming Black Elk, the Oglala Sioux convert to the Faith.

Finally, His Excellency’s speech contains many affirming and noble benedictions for the United States of America and rightly notes that there are many cultures other than the dominant WASP ruling class, which has, since the 1970s, slowly been replaced by other ethnic groups.

Upon a second glance, however, the speech—given at one of the more important Catholic universities in the country, by an allegedly conservative Opus Dei prelate—is a cartoonish left-wing diatribe against the West, loaded with both historical and theological errors.

As Catholics, we should naturally sympathize with the earlier Spanish and French colonial efforts in the New World, which, especially in their earlier incarnations under the Spanish and French crowns, were much more in harmony with Catholic social teaching than the contemporary United States.

We should also recognize that there are many members of the Church in America who do not have European descent but with whom those of us with European ancestry have a deeper spiritual bond than we do with Protestants, pagans, and secularists who share our blood.

However, Archbishop Gomez’s point is not to convince CUA’s graduates to recognize the ethnic diversity of the Catholic Church; rather, it is to make the ridiculous non sequitur that because some of the New World’s Catholic heroes can be found among African and indigenous people, as a result, American Catholics should welcome millions of immigrants from Latin America, Africa, and Asia into their country—in fact, according to First Things, Archbishop Gomez received an honorary doctorate from CUA that very day due to his efforts in “advocating for [illegal] immigrants.”

His Excellency’s sappy speech, which could easily have been given by a left-wing Western politician, begins with a reference to the heroic “father of California”, Fr. Junípero Serra, “canonized” by Pope Francis in 2015.* Upon closer inspection, there are several curious irregularities about Gomez’s statements. 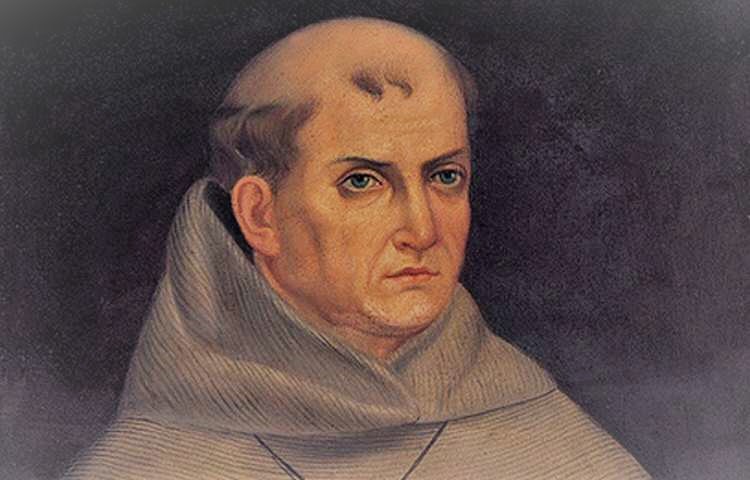 First of all, Archbishop Gomez calls Fr. Serra “Hispanic,” technically a correct term since he was born in Spain. But Gomez’s point is not to celebrate Spanish colonial efforts, considering that in the United States, “Hispanic” is used interchangeably with “Latino” in reference to someone from Latin America who has moved to the U.S. His Excellency, therefore, attempts to link Serra (whom he deceptively states had “come up from Mexico”) with the millions of illegal immigrants in the United States for whom Gomez has spent much of his life advocating.

Secondly, His Excellency tries his hand at some Frankfurt School-style historical revisionism by attempting to add Fr. Serra to the list of America’s founding fathers. Quoting Pope Francis, Archbishop Gomez calls Serra one of the “founding fathers” of America.

Although Catholics should rightly sympathize with men like Fr. Serra over the Freemasons, occultists, and deists who founded the United States, the Franciscan priest nevertheless had nothing to do with the founding of the political entity known as the United States of America. Thus, Archbishop Gomez is duplicitously trying to rewrite American history on this point.

It is further ironic that Archbishop Gomez should mention Serra, whose statues are being removed and vandalized by leftists and Chicano racial nationalists throughout California, precisely because he is viewed as a symbol of Christian and Spanish colonial oppression.

But most disturbing is the title of Archbishop Gomez’s speech: “A New Story for a New America.”

The term “New American” is derived directly from the lexicon of Cultural Marxism and has been used for the past several years throughout the left-wing media to taunt Westerners as they are being inundated by migrants.

In October of 2016, as military-aged Muslim men stormed across the hills and fields of what was once Christendom, National Geographic, under the helm of editor Susan Goldberg, gloated that the indigenous peoples of Europe were being replaced by “The New Europeans,” that is, predominantly Muslim men from Africa and Asia who have forced their way across the borders. Just a few months prior, The New York Times Magazine ran an article with the exact same title, “The New Europeans,” in April of 2016 during the height of the George Soros-funded migrant crisis. 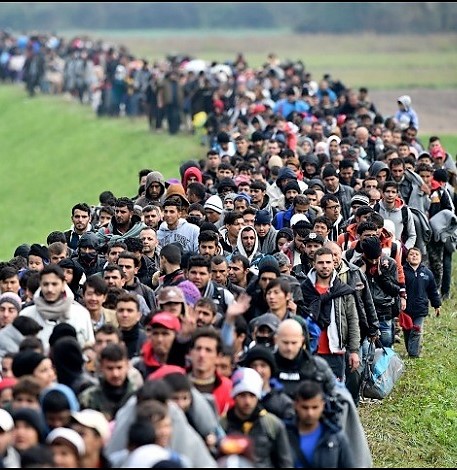 Moreover, the term “New Story” from Archbishop Gomez’s title has a strange pedigree and has also been frequently used by the Soros-funded left, which has literally rewritten the history of Europe and Christendom.

In the United Kingdom, for example, the BBC has been in the process of rewriting British history for the past ten years, depicting Celtic tribesman, Norman priests, and even historical figures like Margaret of Anjou and Julius Caesar as Africans.

Many of these programs are, in fact, cartoons directed at children and they contain a clear message to the people of Britain (as well as to any English-speaking Italians watching the Julius Caesar program): you have no history, culture, or identity.

We should expect National Geographic and the BBC, which have for quite some time made no bones about their contempt for Christianity and the West, to feature such ridiculous social engineering schemes to rewrite Western history/identity in order to help further the agenda of the New World Order. However, it should give us pause that a prominent Catholic bishop is using the language of the New Left to tell students at a prestigious Catholic university that they need to adopt a new multicultural identity and embrace a fallacious historical narrative about America.

Again, the problem is not that Archbishop Gomez is emphasizing the importance of Catholics of African and Native Indian or Latin American descent or the contributions to America of people who have long since been forgotten in American history. The issue is that he is literally cheering on the fragmentation and destruction of American identity, which is part of a deliberately orchestrated plot to destroy the last remnants of the Christian West.

Why Archbishop Gomez would dip into the language of Cultural Marxism in a speech given to CUA graduates is anyone’s guess.

We know that the Archdiocese of Los Angeles has, under His Excellency’s watch, held religious education conferences at which heretical speakers were given a platform to speak in favor of the degenerate sexual lifestyles advocated by the global elite. (Notable examples from the 2018 line-up of speakers include Fr. Carlos Alarcón, O.M.I., Dr. Arthur Fitzmaurice, Fr. James Martin, S.J., Dr. Elizabeth Crabb Breen, Fr. Chris Ponnet, all of whom addressed “LGBT Ministry” topics.)

We also know that Catholic bishops have received money from the Obama administration for resettling refugees in their dioceses and have collaborated with George Soros and other nation-destroying, diversity-enforcing organizations to bring about the death of the West.

Is it just about the money? Or is there some deeper agenda at work here?

If it was Archbishop Gomez’s goal to stir up ethnic animosity among Catholics and to further alienate American Catholics from the Church, he will likely succeed in doing so.

As American Catholics, we need leaders who will promote the common good of our country and support a peaceful coexistence with the other nations of world—a world in which our borders and cultural/ethnic integrity are mutually respected.

Archbishop Gomez’s speech, which could have been given by George Soros, Barack Obama, or any other anti-Western political personage, is a sign that what Our Lady of Fatima called the “errors of Russia” in the form of Cultural Marxism have infiltrated even the highest levels of the Church—at home and abroad.

*Editor’s Note: Since the promulgation of the new Code of Canon Law (1983) radically altered the procedures for the beatification and canonization of blessed and saints, serious doubts have arisen concerning the legitimacy of these new processes that favor speed and quantity over reliability. These concerns have only been exasperated by further changes in practice under the last three popes (John Paul II, Benedict XVI, and now Francis). Regardless of the theological debate over the infallibility of canonizations, the process has been altered so radically that the debate prior to the changes was about something entirely different from the current state of affairs. Although some of the individuals purportedly canonized by the past three popes may have merited being honored for heroic virtue under the former juridically reliable process, it is certainly not within the competence of any individual Catholic to sort out the cases. We will need to wait until the restoration of normalcy in the Church for the proper authorities to sort out this morass. Until such time, we cannot pick and choose which modern canonizations we want to acknowledge. We thus put the term canonization in quotation marks, not to indicate doubt about the particular individual necessarily (in this case, Fr. Junípero Sierra), but about the process. ~ Brian M. McCall, Editor-in-Chief