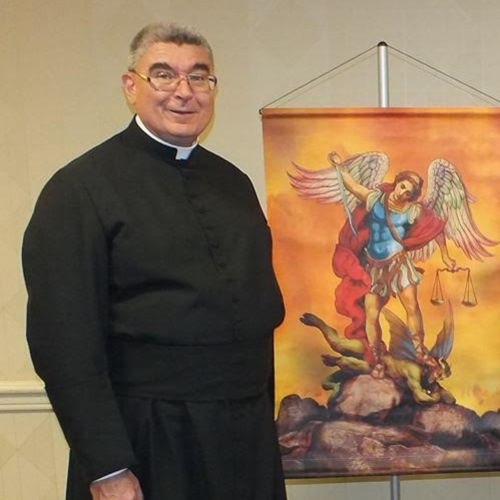 Video from a Traditional Latin Mass Pilgrimage to Fatima

Catholic Family News columnist Father Ladis J. Cizik recently returned from leading over 40 pilgrims to Fatima, Portugal for the 100th Anniversary of Our Lady’s apparitions to the three shepherd children. Father offered the Traditional Latin Mass for his flock every day of the journey.

The Fatima Message is a compendium of the Catholic Faith and a reaffirmation of the Gospel. Join Fr. Cizik for a part of this pilgrimage now!

The following short video on the sacrificial nature of the Mass and the Real Presence of Christ in the Eucharist was recorded at Valinhos, the site of Our Lady’s fourth apparition on August 19, 1917. The video was taken in the pouring rain along the Hungarian Stations of the Cross, dedicated in 1962 as an expression of prayer for the fall of atheistic Communism in Hungary.

Subscribe to Catholic Family News for upcoming articles from Fr. Cizik on this Traditional Latin Mass pilgrimage. Read about the bizarre “crucifixes” at Fatima (“Enemies of the Cross of Christ”) and other works of Modernist art distressing to pilgrims (“Outrages, Sacrileges and Indifference”).

Editor’s Note: Catholic Family News is honored to help circulate the following Open Letter to President Donald Trump at the request of its author, Archbishop Carlo Maria Viganò. Throughout this new letter, His...

In Hoc Signo Vinces: Is President Trump the Constantine of Our Time?

This article first appeared in the October 2020 Print Edition of Catholic Family News (click HERE to subscribe; current subscribers can access the E-Edition HERE). Donald Trump is certainly a controversial figure in our...

Antonio Socci: The Real Objective of the Film Francesco Is To Bring Down Trump and Elect Biden By Antonio Socci — 25 October 2020 First published by Libero Just this morning, Bergoglio has announced the creation of 13...