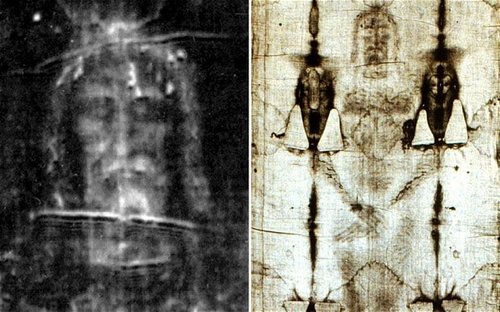 THREADS OF EVIDENCE: Easter, Calvary, the Last Supper, and the Mass

Linen cloths link together the mysteries of Easter, Calvary, the Last Supper, and the Holy Sacrifice of the Mass, providing ‘threads of evidence’ for the traditional teachings of the One, Holy, Catholic, and Apostolic Church.

Today is the Fourth Sunday after Easter during the liturgical period known as Paschaltide. It is written by the Traditional Latin Mass Benedictine Monks of Perpetual Adoration at the Silverstream Priory in County Meath, Ireland that: “The oldest liturgical traditions in the Church contemplate, celebrate, and adore the life-giving Cross of Our Lord Jesus Christ in Paschaltide.” The quote continues: “Some benighted souls object to recalling the mysteries of the Passion and Cross after Pascha. Such an opinion betrays little knowledge of the Church’s living and abiding tradition in this regard.”

With this thought in mind, I will connect the events of Easter Sunday to the Crucifixion of Christ, the Last Supper, and the Holy Sacrifice of the Mass. In the continuation of the Holy Gospel according to Saint John, it is written:

There are studies which indicate that the table cloth from the Last Supper was used to wrap Jesus’ Body after the Crucifixion. It is said that inexpensive burial cloths, typically used by the Jews at the time of Jesus, would not have been available for sale during the Passover, when all the stores were closed. Therefore, Joseph of Arimathea, who fits the description of “the master of the house” (Mk 14:14) in charge of the Upper Room where the Last Supper was held, would have taken the more expensive and intricately woven linen table cloth to use as the burial shroud of Christ. Remember that it was Joseph of Arimathea who was given permission by Pontius Pilate to take the Body of Christ down from the Cross (cf. Mark 15:43-46).

Likewise, the “napkin” or “the cloth that covered his head” (in other translations), could have been a true napkin from the Last Supper. At the time of Jesus, if the Master of the house was finished with dinner, he would haphazardly set the napkin down, which meant that he was not coming back to the table. If, however, the Master’s napkin was folded neatly (or wrapped or rolled up), that meant that the Master was coming back.

On that Easter morning, when Saint John saw the napkin rolled up, it could have been an affirmation to him that Jesus, the Master, was ‘coming back.’ John also may have seen an amazing image of the Master imprinted on the linen burial shroud. That would explain why Saint John wrote that “he saw, and believed” (John 20:8).

Keep in mind that the Last Supper was the First Mass ever offered, as Jesus changed bread and wine for the first time ever into His Sacred Body and Blood, as He anticipated His Death on Calvary. The Mass today, offered by a priest in persona Christi—that is, “in the Person of Christ”—also changes bread and wine into the Body and Blood of Christ.

The Altar represents the Body of Christ, and that is the main reason why the priest kisses the Altar at various times during the Mass. These reverences are in addition to the act of veneration, at the beginning of the Mass, to the relics contained in the Altar.

Like the Body of Christ covered with a burial shroud, our Altar is covered with an Altar Cloth. Like the napkin that covered the Head of Christ on the Cross, we have a Corporal which is in contact with the Body of Christ until it is neatly folded up after the Holy Sacrifice. The Last Supper, Calvary, and the Holy Sacrifice of the Mass, all seem united by the linen table cloth and the napkin found on Easter Sunday.

The burial shroud that Saint John beheld is most likely the Shroud of Turin, located in the Royal Chapel of the Cathedral of Saint John the Baptist in Turin, Italy. The Shroud is believed by many, including this writer, to be the long burial cloth of Christ that covered the length of the front and back sides of Our Lord’s Body. This Shroud contains remarkable and inexplicably formed images, as well as Blood stains of a Man who had been crucified and crowned with thorns. The Shroud of Turin is also on an intricately woven linen cloth that is more akin to a table cloth than it is to a cheap burial shroud typically used at the time of Christ.

Studies connecting Joseph of Arimathea to the Upper Room and to the burial of Christ lend credibility to the awesome possibility that the table cloth used for the First Mass at the Last Supper is also the Shroud of Turin. Investigation of the Shroud revealed the possible presence of wine stains on the cloth. Scientific analysis of the Blood stains on the Shroud of Turin identify them as type AB positive, the same as that of the Eucharistic Miracle of Lanciano, a Consecrated Host that changed into visible Flesh and Blood in the 8th century.

The Sudarium of Oviedo is believed to be the “napkin” that was found rolled up neatly in the tomb. It is enshrined in the Holy Chapel (Camara Santa) at the Cathedral of San Salvador in Oviedo, Spain. This cloth, measuring approximately 33 inches by 21 inches, would have been used to cover the Sacred Face of Jesus on the Cross, just after He died. It was a Jewish custom to cover the face of the deceased at the point of death.