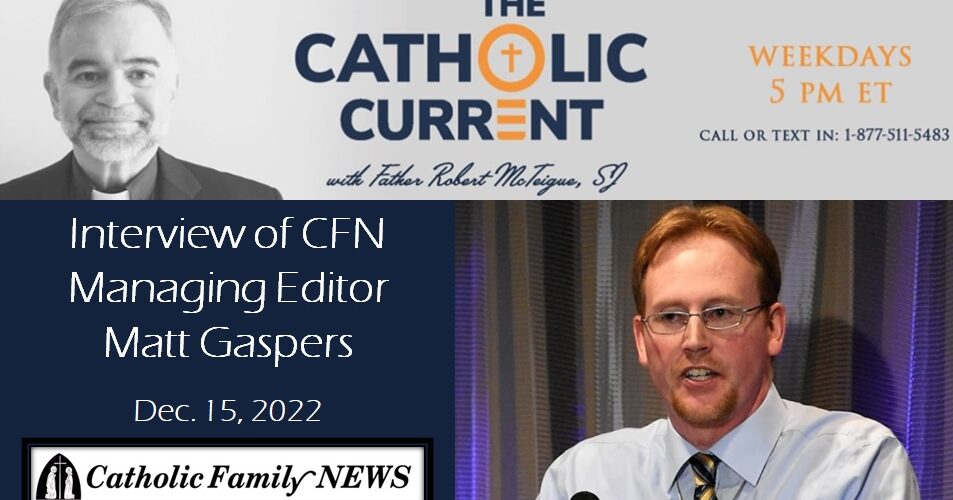 INTERVIEW: Matt Gaspers on The Catholic Current — Next Phase of Synod on Synodality

CFN managing editor Matt Gaspers was recently interviewed on The Catholic Current, a radio program produced by The Station of the Cross (see below for full audio).

Fr. Robert McTeigue, S.J., host of the show, and Mr. Gaspers discussed the next phase of the Synod on Synodality, known as the Continental Stage, and the working document which the Vatican released on Oct. 27, 2022.

Fr. McTeigue and Mr. Gaspers discuss some of the more concerning passages in the working document (including its call for “radical inclusion”), the fact that serious errors are not being corrected by those in charge of the Synod, disturbing similarities between the German Synodal Way and the worldwide Synod on Synodality, and more.

Towards the end, Gaspers quotes from Fr. Gerald Murray’s critique of the working document:

“There is plainly an open revolution going on in the Church today, an attempt to convince us that an embrace of heresy and immorality is not sinful, but rather a response to the voice of the Holy Spirit speaking through people who feel marginalized by a Church that has, up to now, been unfaithful to its mission. … Let’s pray that the Synod Fathers, and all the bishops, will stand up and defend the Church’s teaching and practice against this Vatican-sponsored exercise in self-destructive behavior. Souls are at stake.”