Editor’s Note: In his most bold act to confront the demoniacally allied Globalist New World Order, Archbishop Carlo Maria Viganò has called for the foundation of an Anti-Globalist Alliance.

After briefly diagnosing the unfolding coup by globalist elites who are subverting and taking over every area of society (religion, government, education, etc.), the former Apostolic Nuncio to the United States calls for organized resistance to this unlawful and unholy coup. He announces his intention to found an alliance among “rulers, political and religious leaders, intellectuals and all people of good will” to oppose and refute this coup that seeks world dictatorship. This alliance will propose “concrete alternatives for a political program inspired by the common good, the moral principles of Christianity, traditional values, the protection of life and the natural family, the protection of business and work, the promotion of education and research, and respect for Creation.”

See below for a video in which His Grace launches this initiative and read the official written announcement (below the video). — Brian M. McCall, Editor-in-Chief

APPEAL FOR AN ANTI-GLOBALIST ALLIANCE

For two years now we have been witnessing a global coup d’état, in which a financial and ideological elite has succeeded in seizing control of part of national governments, public and private institutions, the media, the judiciary, politicians and religious leaders. All of these, without distinction, have become enslaved to these new masters who ensure power, money and social affirmation to their accomplices. Fundamental rights, which up until yesterday were presented as inviolable, have been trampled underfoot in the name of an emergency: today a health emergency, tomorrow an ecological emergency, and after that an internet emergency.

This global coup d’état deprives citizens of any possibility of defense, since the legislative, executive, and judicial powers are complicit in the violation of law, justice, and the purpose for which they exist. It is a global coup d’état because this criminal attack against citizens extends to the whole world, with very rare exceptions. It is a world war, where the enemies are all of us, even those who unwittingly have not yet understood the significance of what is happening. It is a war fought not with weapons but with illegitimate rules, wicked economic policies, and intolerable limitations of natural rights.

Supranational organizations, financed in large measure by the conspirators of this coup d’état, are interfering in the government of individual nations and in the lives, relationships, and health of billions of people. They are doing it for money, certainly, but even more so in order to centralize power so as to establish a planetary dictatorship. It is the Great Reset of the World Economic Forum, the Agenda 2030 of the United Nations. It is the plan of the New World Order, in which a Universal Republic enslaves everyone and a Religion of Humanity cancels Faith in Christ.

In the face of this global coup d’état, it is necessary to form an international Anti-Globalist Alliance, which gathers all those who want to oppose the dictatorship, who have no intention of becoming slaves to a faceless power, who are not willing to cancel their own identity, their own individuality, their own religious faith. If the attack is global, the defense must also be global.

I call upon rulers, political and religious leaders, intellectuals and all people of good will, inviting them to unite in an Alliance that launches an anti-globalist manifesto, refuting point-by-point the errors and deviations of the dystopia of the New World Order and proposing concrete alternatives for a political program inspired by the common good, the moral principles of Christianity, traditional values, the protection of life and the natural family, the protection of business and work, the promotion of education and research, and respect for Creation.

This Anti-Globalist Alliance will have to bring together the Nations that intend to escape the infernal yoke of tyranny and affirm their own sovereignty, forming agreements of mutual collaboration with Nations and peoples who share their principles and the common yearning for freedom, justice, and goodness. It will have to denounce the crimes of the elite, identify those responsible, denounce them to international tribunals, and limit their excessive power and harmful influence. It will have to prevent the action of the lobbies, above all by fighting against the corruption of state officials and those who work in the information industry, and by freezing the capital used to destabilize the social order.

In Nations where governments are subservient to the elite, they will be able to establish popular resistance movements and committees of national liberation, including representatives of all sectors of society who propose a radical reform of politics, inspired by the common good and firmly opposed to the neo-malthusian project of the globalist agenda.

I invite all those who want to defend traditional Christian society to meet together in an international forum, to be held as soon as possible, in which representatives of various nations come together to present a serious, concrete, and clear proposal. My appeal is made to political leaders and to rulers who care about the good of their citizens, leaving aside the old systems of political parties and the logic imposed by a system enslaved to power and money. I call the Christian nations together, from east to west, inviting Heads of State and the healthy forces of institutions, the economy, labor, universities, health care and information to join a common project, disrupting the old systems and putting aside the hostilities that are desired by the enemies of humanity in the name of divide et impera. We do not accept our adversary’s rules, because they are made precisely to prevent us from reacting and organizing an effective and incisive opposition.

I call upon Nations and their citizens to ally themselves under the Cross of Our Lord Jesus Christ, the only King and Savior, the Prince of Peace. In hoc signo vinces.

Let us found this Anti-Globalist Alliance, let us give it a simple and clear program, and let us free humanity from a totalitarian regime that brings together in itself the horrors of the worst dictatorships of all time. If we continue to delay, if we do not understand the threat that looms over us all, if we do not react by organizing ourselves into a firm and courageous resistance, this infernal regime that is establishing itself everywhere will not be able to be stopped.

And may Almighty God assist us and protect us. 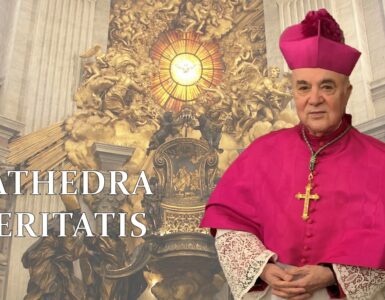 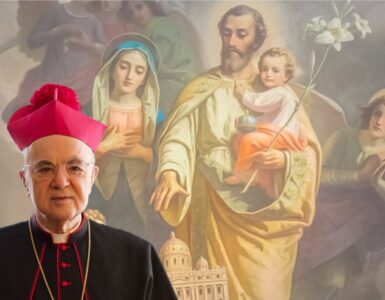 Abp. Viganò: “The Holy Family Shows Us the Model of the Christian Family”

PDF Button ET ERAT SUBDITUS ILLISArchbishop Viganò’s Homily for the Sundayof the Sacred Family in the Octave of Epiphany And He was submissive to them.And His Mother kept all these things in her heart;and Jesus grew in... 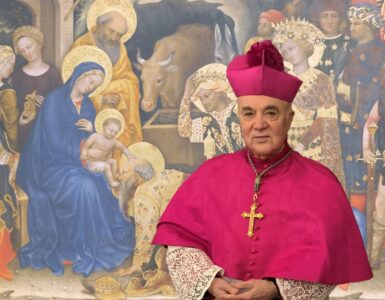 Abp. Viganò on Epiphany: “We Ask the Child King to Convert” Both Civil and Church Leaders