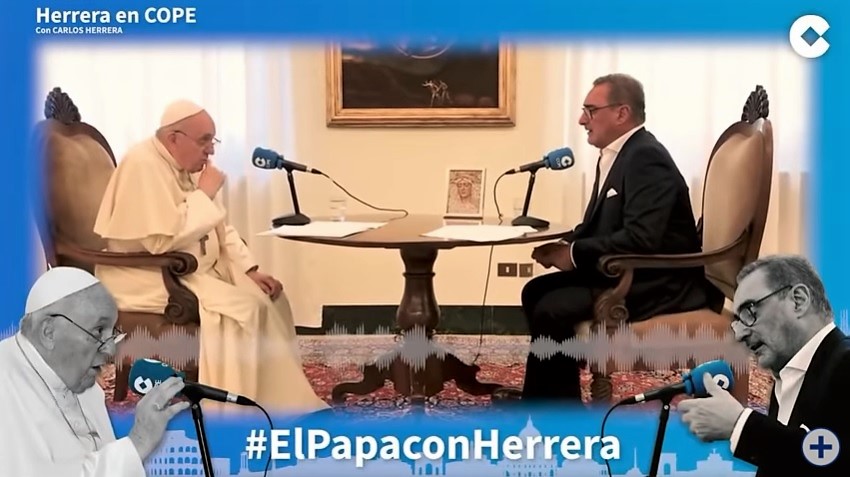 In a lengthy new interview with COPE, a Spanish radio station, Pope Francis fields questions on a wide range of topics,[1] including his Apostolic Letter Traditionis Custodes (July 16, 2021) that effectively abolished Benedict XVI’s Summorum Pontificum (July 7, 2007) and severely restricts access to the Traditional Latin Mass for priests and laity alike.

During the interview, conducted sometime this past weekend (Aug. 28-29) according to COPE’s summary, journalist and broadcaster Carlos Herrera inquired (Spanish audio available here, 22:13 and following):

Francis, for his part, offered some revealing remarks in response.

“The history of Traditionis Custodes is long,” says Pope Francis, attempting to establish continuity with Popes John Paul II and Benedict XVI — the former having granted bishops an indult (special permission) to allow the Traditional Mass in their respective dioceses under certain conditions,[2] the latter having acknowledged (much to the chagrin of many bishops, no doubt) that the Traditional Mass “was never juridically abrogated and, consequently, in principle, was always permitted.”[3]

“When first St. John Paul II — and later Benedict, more clearly with Summorum Pontificum — gave this possibility,” Francis continues, “of celebrating with the Missal of John XXIII (prior to that of Paul VI, which is post-conciliar) for those who did not feel good with the current liturgy, who had a certain nostalgia… it seemed to me one of the most beautiful and human pastoral things of Benedict XVI, who is a man of exquisite humanity. And so it began.”[4]

“After three years,” he goes on, “[Benedict] said that an evaluation had to be made.[5] An evaluation was made, and it seemed that everything was going well. And it was fine. Ten years passed from that evaluation to the present…and last year we saw with those responsible for Worship and for the Doctrine of the Faith that it was appropriate to make another evaluation of all the bishops of the world.”

Pope Francis offers no explanation as to why “it was appropriate to make another evaluation” in 2020. Neither did Cardinal Luis Ladaria, prefect of the Congregation for the Doctrine of the Faith, who stated in his very brief letter to the presidents of episcopal conferences (March 7, 2020) that “His Holiness Pope Francis wishes to be informed about the current application” of Summorum Pontificum. Thus, it was simply Francis’ will “to be informed” that produced the 2020 survey (for purposes which now appear obvious).

After the completed surveys were submitted and “studied,” according to Francis, “the concern that appeared the most was that something that was done to help pastorally those who have lived a previous experience was being transformed into ideology.” In other words, over the past thirteen years the Traditional Latin Mass has gone from being a nostalgic “experience” to an ideological tool — something “exploited to widen the gaps, reinforce the divergences, and encourage disagreements that injure the Church, block her path, and expose her to the peril of division,” according to Francis in his Letter to Bishops accompanying Traditionis Custodes.[6]

“So,” he says, “we had to react with clear norms,” in order “to support and consolidate Summorum Pontificum.” This claim is quite bizarre, in light of Art. 8 of Traditionis Custodes, which states: “Previous norms, instructions, permissions, and customs that do not conform to the provisions of the present Motu Proprio [e.g., those contained in Summorum Pontificum] are abrogated.”

Regarding the composition of Traditionis Custodes, Pope Francis explains, “I did more or less the outline, I had it studied and I worked, and I worked a lot, with traditionalist people of good sense. And the result,” he says, “was that pastoral care that must be taken, with some good limits.” Needless to say, it would be very interesting to know the identity of those “traditionalist people of good sense” with whom he collaborated.

After mentioning the imperative (according to him) of proclaiming the Scriptures in the vernacular during Mass[7] — “otherwise it would be like laughing at the Word of God” (another bizarre claim) — Francis concludes by making a statement that seems to go beyond his own provisions in Traditionis Custodes about the need for priests to obtain permission to offer the Traditional Mass:

“After this motu proprio, a priest who wants to celebrate that is not in the same condition as before — that it was for nostalgia, for desire, etc.— and so he has to ask permission from Rome. A kind of permission for bi-ritualism, which is given only by Rome. [Like] a priest who celebrates in the Eastern Rite and the Latin Rite, he is bi-ritual but with the permission of Rome.”

Notice how he says “a priest [no qualification] who wants to celebrate has to ask permission from Rome,” whereas Traditionis Custodes distinguishes between “[p]riests ordained after the publication of” TC (Art. 4) and those “who already celebrate according to the Missale Romanum of 1962” (Art. 5). According to TC, the former “should submit a formal request to the diocesan Bishop who shall consult the Apostolic See before granting this authorization,” whereas the latter “should request from the diocesan Bishop the authorization to continue to enjoy this faculty.” In other words, no “permission from Rome” is necessary for priests who were already offering the Traditional Mass prior to TC. (With all due respect, it appears that Francis needs to re-read his own document.)

Notice, also, the implicit admission on Francis’ part that what Benedict XVI called “two usages of the one Roman rite” (Summorum Pontificum, Art. 1) — namely, the “Extraordinary Form” (Traditional Mass) and “Ordinary Form” (New Mass) — are actually two distinct rites.[8] What else could Francis possibly mean, when he compares the alleged need for permission to offer the Traditional Mass to “bi-ritualism”?[9]

And finally, his last sentence contains a phrase comparable to something out of George Orwell’s fictitious Ministry of Truth: “If you read the letter well and read the Decree well, you will see that it is simply a constructive reordering, with pastoral care and avoiding an excess by those who are not…” (emphasis added).[10]

In reality, Traditionis Custodes and its accompanying letter to bishops is a destructive disordering of what Christopher Ferrara once called the “strong canonical framework” established by Benedict XVI via Summorum Pontificum and subsequent documents that “freely allow[ed] for a widespread and unhindered revival of liturgical tradition” throughout the universal Church.

Let us pray that a future pope will cast Traditionis Custodes into the abyss (along with several other acts of the current Roman Pontiff) and restore liturgical, doctrinal, moral, and spiritual sanity to the Church. May it be so, through the intercession of Our Lady of Fatima!

[1] Far too many for this article (see here for a broader summary).

[3] Benedict XVI, Letter to Bishops accompanying Summorum Pontificum (July 7, 2021). Furthermore, in Summorum Pontificum Benedict confirmed the right of “any Catholic priest of the Latin rite” to offer the Traditional Mass without the need of obtaining “permission from the Apostolic See or from his own Ordinary” (Art. 2).

[4] While “nostalgia” might be a factor for some, for many (if not most) it is primarily a matter of doctrine (see, for example, the Brief Critical Study of the Novus Ordo Missae, colloquially known as the “Ottaviani Intervention”).

[5] Correction: Benedict actually said, “I invite you, dear Brothers, to send to the Holy See an account of your experiences, three years after this Motu Proprio [Summorum Pontificum] has taken effect. If truly serious difficulties come to light, ways to remedy them can be sought.” (Ibid., emphasis added).

[6] For one who firmly believes that “the liturgical reform is irreversible,” his anxiety about the widespread revival of the Traditional Latin Mass is understandable.

[8] Paul VI essentially conceded the same, when he referred to “the new rite of the Mass” (Italian, nuovo rito della Messa) during two consecutive Wednesday audiences (Nov. 19 and Nov. 26, 1969), just before the New Order of Mass (again, new) was introduced on Nov. 30, 1969 (First Sunday of Advent) per his Apostolic Constitution Missale Romanum (Apr. 3, 1969).

[9] Speaking of “bi-ritualism,” doesn’t this mean that Traditional Roman Rite Catholics should be given their own Patriarch, bishops, dioceses, Code of Canon Law, and sui iuris status — just like the Eastern Catholic Churches?

[10] According to the audio (26:46 and following), Francis paused (“those who are not…”) and Mr. Herrera interjected in order to move on to the next subject.