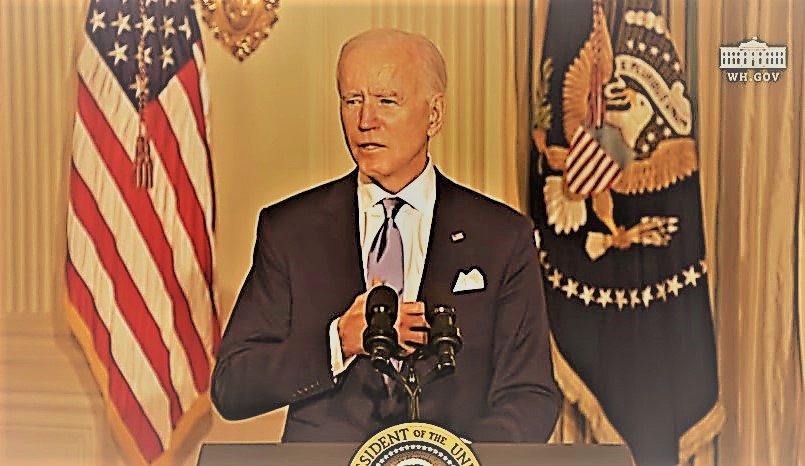 On his first day in office, in addition to signing a flurry of executive orders, President Joe Biden led a virtual swearing-in ceremony for “Day One Presidential Appointees,” that is, administrative staff for the White House and various governmental agencies. Before administering the oath of office to these new federal employees, he spoke to his “team” about their “obligation” and “privilege” to work to “restore the soul” of America, as well as his expectation for them to practice “honesty and decency” in their dealings with each other and with the people they serve.

A few minutes into his remarks, President Biden told his new subordinates that “we owe your families, we owe your families, because those of you working in the White House, [and] those who will be working in other agencies, you’re gonna work like the devil. We all do. We put in long hours. And it shouldn’t be something that you should do unless you really care about it a great deal.”

He returned a few minutes later to this theme of needing to be passionate about their work (6:25 and following in the video below):

“So, you shouldn’t be doing this unless you feel it. I always say, a simple proposition: I trust people more who, the idea and the concern starts in their gut, goes to their heart, and is to be [sic] able to articulate it by a good brain, rather than the person who thinks of it intellectually but never feels it. The people you can count on are the ones that starts [sic] in the gut, works their [sic] way to the heart, and have the intellectual capacity to do what needs to be done.”

Aside from noting the grammatical gaffes, the first thing that occurred to me upon hearing these words was, “Wow, spoken like a true Modernist.”

Modernism, as Pope St. Pius X explains in Pascendi Domini Gregis (1907), is “the synthesis of all heresies,” and it leads to “the destruction not of the Catholic religion alone but of all religion” (Pascendi, n. 39). The reason for its destructive power is that it attacks not this or that truth, but rather the nature of truth itself.

According to Modernism, truth is not something external to man — in other words, it is not an objective reality to which the human intellect must conform; rather, it is immanent in man, something that mysteriously bubbles up from the depths of his subconscious, or “gut,” to quote President Biden. When this philosophical error is applied to religion, the result is that Catholicism — the unique deposit of divinely revealed truths — becomes merely one expression of the “religious sentiment” of believers who adhere to a particular tradition as a matter of cultural heritage or personal preference. As St. Pius X explains in Pascendi, describing the Modernist system,

“the religious sentiment, which through the agency of vital immanence emerges from the lurking places of the subconsciousness, is the germ of all religion, and the explanation of everything that has been or ever will be in any religion. The sentiment, which was at first only rudimentary and almost formless, gradually matured, under the influence of that mysterious principle from which it originated, with the progress of human life, of which, as has been said, it is a form.” (Pascendi, n. 10)

Thus, we see how Modernists “pervert the eternal concept of truth” (Pascendi, n. 13) and relativize everything that falls outside the realm of empirical science (yet even there, they are prone to take certain liberties, e.g., pretending that biological males can somehow become females while retaining their Y chromosomes). In essence, the Modernist system is rooted in agnosticism — that is, skepticism regarding the ability of the human intellect to attain sure knowledge of immaterial things — as St. Pius X observes:

“Modernists place the foundation of religious philosophy in that doctrine which is usually called Agnosticism. According to this teaching, human reason is confined entirely within the field of phenomena, that is to say, to things that are perceptible to the senses, and in the manner in which they are perceptible; it has no right and no power to transgress these limits. … Given these premises, all will readily perceive what becomes of Natural Theology [study of God based on reason alone], of the motives of credibility [rational grounds for accepting divine revelation, such as prophecies and miracles], of external revelation. The Modernists simply make away with them altogether; they include them in Intellectualism, which they call a ridiculous and long-ago defunct system.” (Pascendi, n. 6)

“Faith, therefore, is uniquely from within. In fact, it is a part of human nature, ‘a kind of motion of the heart,’ hidden and unconscious. It is, in Modernist terms, a natural instinct belonging to the emotions, a ‘feeling for the divine’ that cannot be expressed in words or doctrinal propositions, an attitude of spirit that all people have naturally but that some are more aware of having.”[1]

In short, Modernist “faith” is a matter of feelings rather than objective certitude based on reason and revelation. As Joe Biden would say, it “starts in the gut”. Consequently, it is very anthropocentric and focused on temporal concerns, whereas the theological virtue of faith (received in Baptism, together with hope and charity) is inherently theocentric — concerned, above all, with seeking and spreading “the Kingdom of God and His justice” (Matt. 6:33).

To be sure, the Church has always had great concern for attending to people’s temporal needs by performing corporal works of mercy (e.g., feeding the hungry, clothing the naked, caring for the sick), but her primary mission is to save souls, “that they may be converted from darkness to light, and from the power of Satan to God, that they may receive forgiveness of sins, and a lot among the saints” (Acts 26:18).

Sadly, Joe Biden has no discernable concern for the salvation of souls. Instead, he seems to believe that the Church’s primary mission is social service work. This is no doubt why he thinks so highly of Pope Francis.

Biden and Bergoglio: A Modernist Duo

In 2015, shortly before the Pope’s visit to the United States (Sept. 22-27), then-Vice President Biden granted an interview to Fr. Matt Malone, S.J., editor-in-chief of America magazine. He could barely contain himself while speaking about Francis, calling him “the embodiment of Catholic social doctrine” due to his concern for the poor, his example of being “inclusive,” and his focus on climate change (see 3:32 and following in the video below):

(For anyone interested in a serious treatment of Catholic social doctrine, see here.)

“I’m excited, quite frankly,” gushed Biden, “as a practicing Catholic, I am really excited by — the whole world is getting to see what are the basic, essential elements of what constitutes Catholicism,” referring to the various causes championed by Francis. “We can argue about dogma. We can argue about some of the de fide doctrine that’s been declared, but this is below it and above it. This is something much larger.”

Biden’s comments remind me of another important document issued by St. Pius X: Notre Charge Apostolique (1910), a letter addressed to “the French Archbishops and Bishops” of the day concerning Le Sillon (“The Furrow”), a once-Catholic social movement in France that had degenerated into a dangerous vehicle for Modernism among the working class (for further background, see here and here).

“Our Apostolic mandate,” the letter opens, “requires from Us that We watch over the purity of the Faith and the integrity of Catholic discipline. It requires from Us that We protect the faithful from evil and error; especially so when evil and error are presented in dynamic language which, concealing vague notions and ambiguous expressions with emotional and high-sounding words, is likely to set ablaze the hearts of men in the pursuit of ideals which, while attractive, are nonetheless nefarious.” (If only Pope Francis would follow St. Pius X’s example!)

“And now,” the saintly pontiff laments, “overwhelmed with the deepest sadness, We ask Ourselves, Venerable Brethren, what has become of the Catholicism of the Sillon? Alas! This organization, which formerly afforded such promising expectations, this limpid and impetuous stream, has been harnessed in its course by the modern enemies of the Church and is now no more than a miserable affluent of the great movement of apostasy being organized in every country for the establishment of a One-World Church which shall have neither dogmas, nor hierarchy; neither discipline for the mind, nor curb for the passions; and which, under the pretext of freedom and human dignity, would bring back to the world (if such a church could overcome) the reign of legalized cunning and force, and the oppression of the weak and of all those who toil and suffer.”

This is what we face under the leadership of Pope Francis and President Biden: a “great movement of apostasy” working to establish “a One-World Church which shall have neither dogmas, nor hierarchy; neither discipline for the mind, nor curb for the passions”. As Archbishop Carlo Maria Viganò observed earlier this month, “Biden is the equivalent of Bergoglio,” and we will no doubt see continued collaboration between them.

Joe Biden is fond of using the phrase, “Keep the faith!” This is exactly what Catholics must do, understanding that faith is “an act of the intellect assenting to the divine truth at the command of the will moved by the grace of God” (Summa Theologiae II-II, q. 2, a. 9, emphasis added).

In order to combat the false Modernist concept, let us all firmly profess St. Pius X’s Oath Against Modernism (1910), which includes the following proposition:

“…I hold with certainty and sincerely confess that faith is not a blind sentiment of religion welling up from the depths of the subconscious under the impulse of the heart and the motion of a will trained to morality; but faith is a genuine assent of the intellect to truth received by hearing from an external source. By this assent, because of the authority of the supremely truthful God, we believe to be true that which has been revealed and attested to by a personal God, our Creator and Lord.” (Emphasis added)

This is the only faith that will sustain us through the next four years and beyond.