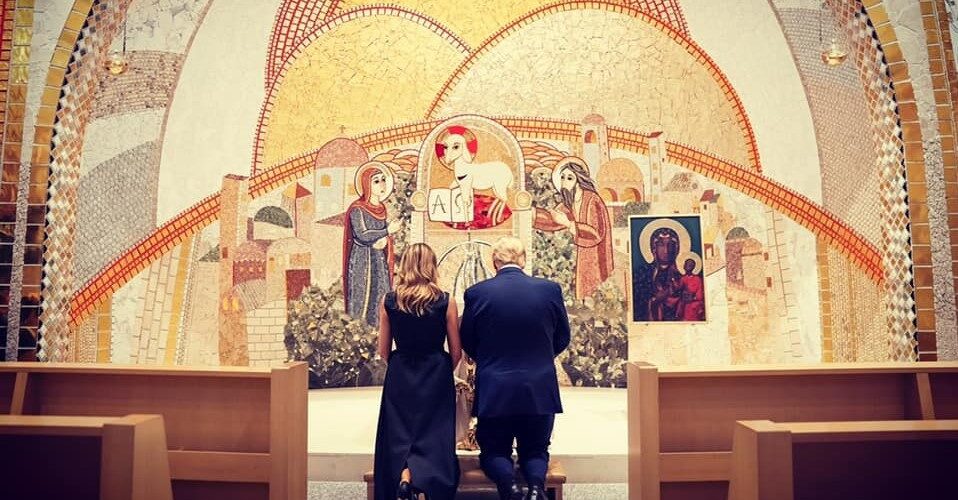 Epiphany 2021: Send Forth Thy Light and Thy Truth, O Lord

“Send forth Thy light and Thy truth: they have conducted me, and brought me unto thy holy hill, and into thy tabernacles. And I will go in to the altar of God: to God who giveth joy to my youth.” — Psalm 42(43):3-4

January 6, 2021, prayerfully, will be a day of Epiphany for the United States of America, when TRUTH will prevail over the darkness of evil. January 6, 2021 will be the traditional Feast of the Epiphany. The Feast of the Epiphany is an ancient holy day in the Catholic Church which celebrates the Divine Revelation of showing forth the TRUTH that Jesus Christ is God Incarnate (a ‘Theophany’). Our Lord and God, Jesus Christ, shines forth in the Epiphany as the Way, the TRUTH and the Light! To be ‘One Nation Under God’ we, as a country, must walk in the Light of TRUTH.

In the Western or Latin Rite of the Church, the Feast of the Epiphany principally commemorates the visit of the Three Kings to the Divine Child Jesus. The Wise Men followed the Light of the star from distant lands to find the newborn King so that they could adore Him. This was a manifestation of the Divinity of Christ to the Gentiles, as Magi from the East recognized Him as the ‘King of Kings.’ The TRUTH was revealed in an unexpected way. The Holy Gospel according to St. Matthew recounts:

“… behold the star which they had seen in the east, went before them, until it came and stood over where the Child was. And seeing the star they rejoiced with exceeding great joy. And entering into the house, they found the Child with Mary His Mother, and falling down they adored Him. And opening their treasures, they offered Him gifts: gold, frankincense, and myrrh.” (Matt. 2:9-11)

In the Eastern Rites of the Church, the Baptism of Jesus in the Jordan River by St. John the Baptist is the principal focus of the Feast of the Epiphany, since it was there that Jesus Christ was majestically recognized as the Son of God. Almighty God revealed the TRUTH in an unexpected way. There, at the Jordan, the Holy Gospel according to St. Mark declares:

“And it came to pass, in those days, Jesus came from Nazareth of Galilee, and was baptized by John in the Jordan. And forthwith coming up out of the water, he [John] saw the heavens opened, and the Spirit as a dove descending, and remaining on Him. And then there came a voice from Heaven: ‘Thou art My Beloved Son; in Thee I am well pleased.” (Mark 1:9-11)

Another Epiphany is the Birth of Christ as Savior and Lord on that first Christmas, as was announced by an angel to the shepherds. The shepherds then went to behold the Divine Child Jesus for themselves. Once again, the TRUTH was revealed in an unexpected way. As the Holy Gospel according to St. Luke tells us:

“Suddenly there was with the Angel a multitude of the heavenly army, praising God, and saying: Glory to God in the highest; and on earth peace to men of good will. And it came to pass after the angels departed from them into heaven, the shepherds said to one another, ‘Let us go over to Bethlehem and see this word that is come to pass, which the Lord has hath shewed to us.’ And they came with haste, and they found Mary and Joseph, and the Infant lying in the manger. And seeing, they understood of the word that had been spoken them concerning this Child. And all who had heard marveled at the things told them by the shepherds.” (Luke 2:15-18)

The Wedding Feast at Cana is also considered to be an Epiphany, at which time Our Lord and God, Jesus Christ, performed His first public miracle. Once again, the TRUTH was revealed in an unexpected way. The Holy Gospel according to St. John records:

“Now there were set there six waterpots of stone, according to the manner of purifying of the Jews, containing two or three measures apiece. Jesus saith to them: Fill the waterpots with water. And they filled them up to the brim. And Jesus saith to them: Draw out now, and carry to the chief steward of the feast. And they carried it. And when the chief steward had tasted the water made wine, and knew not whence it was, but the waiters knew who had drawn the water; the chief steward calleth the bridegroom, and saith to him: Every man at first setteth forth good wine, and when men have well drunk, then that which is worse. But thou hast kept the good wine until now. This beginning of miracles did Jesus in Cana of Galilee; and manifested His glory, and His disciples believed in Him.” (John 2:6-11)

The Transfiguration of Jesus on Mount Tabor is also considered to be an Epiphany showing forth the Divinity of Christ. The TRUTH again is revealed in a most unexpected way. The Holy Gospel according to St. Matthew tells us:

“And after six days, Jesus taketh unto Him Peter and James, and John his brother, and bringeth them to a high mountain apart. And He was transfigured before them. And His face did shine as the sun: and His garments became white as snow. … and … behold a bright cloud overshadowed them. And lo, a voice out of the cloud, saying: This is My beloved Son, in Whom I am well pleased: hear ye Him.” (Matt. 17:1-5)

In a previous article of mine — “Riots, Revolution, Rigged Elections, and the Precious Blood of Jesus” — we were able to see how those in the grip of the devil, motivated by a hatred of God and country, historically endeavored to undermine the TRUTH up to our present day in an effort to destroy the United States of America. History shows that there are indeed ‘Faces of Evil’ within our country who are Communists and Socialists opposed to our Constitutional freedoms and to the traditional teachings of Christ and His One, Holy, Catholic and Apostolic Church. ALL of these treasonous traitors are opposed to the TRUTH.

In the Merriam-Webster Dictionary, the word ‘Epiphany’ is defined as: “(1) a usually sudden manifestation or perception of the essential nature or meaning of something. (2) an intuitive grasp of reality through something (such as an event), usually simple and striking. (3) an illuminating discovery, realization, or disclosure.” May it be God’s holy will that we have an Epiphany moment in our time.

An Epiphany is a revelation of TRUTH. The TRUTH shines Light on darkness.  The Light casts out darkness. Jesus Christ is the Light of the world. On the traditional Feast of the Epiphany — January 6th, 2021 — a joint session of the United States Congress will convene to formally count the Electoral College ballots to determine the next President of the United States. The TRUTH may be revealed on this day in an unexpected way for many. Let us pray that the TRUTH will win out and that anyone and anything inconsistent with the TRUTH will be revealed for all to see. May the TRUTH lead us to truly be ‘One Nation Under God.’

“If we ever forget that we are one nation under God,” said President Ronald Reagan, “then we will be one nation gone under.” Let us pray for an Epiphany moment for our country in our time this Wednesday, January 6, 2021.

No matter what happens on that day, as Padre Pio said: “Pray, hope, and don’t worry.” And further, “The Rosary is the weapon against evil.” In addition, Padre Pio reminded us that “[d]iscouragement is the tool of the devil.” Our Lady of Fatima directed us to “[p]ray the Rosary every day” and assured us: “In the end, My Immaculate Heart will triumph.” And, as Our Lord and God, Jesus Christ, told us repeatedly: “Be not afraid.” Be brave. Be patriots.

Remember always that Jesus promised: “And you shall know the TRUTH, and the TRUTH shall make you free” (John 8:32). May we all have a Blessed New Year, living in the TRUTH ‘in the land of the free and the home of the brave.’