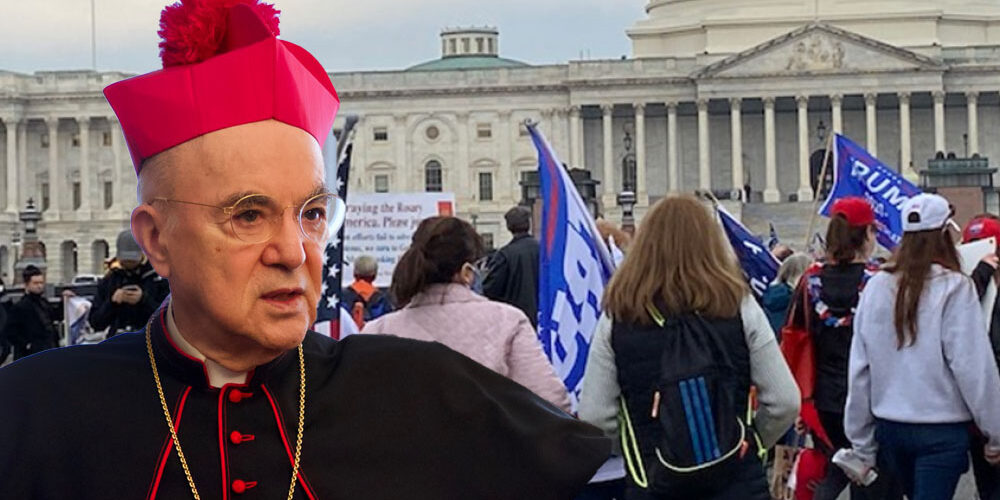 On December 12, 2020, the Feast of Our Lady of Guadalupe Empress of the Americas, thousands upon thousands of patriotic Americans flooded our nation’s capital. They came for a day of public prayer for the safety of our country which is undergoing a Socialist coup through a fraudulent election. Archbishop Carlo Maria Viganò, former Papal Nuncio to our Country, was one of the public figures to address the masses of patriots. Others included General Michael Flynn. Catholic Family News has received a copy of the address given by the Archbishop to the crowds by video link. Since August of 2018, when the Archbishop released his famous Testimony detailing corruption in the hierarchy even at the highest levels, he has gone into hiding in Italy. It is therefore a rare opportunity to see and hear Archbishop Viganò live. His words were powerful and inspiring. He is a true shepherd given to our nation at a time when many of the bishops who are supposed to care for the dioceses, are either allied with the forces of darkness or have fled for fear of the wolves. We hope you are inspired to keep fighting with hope by reading this short but powerful text.

I greet all of you on this day dedicated to prayer for our beloved Nation, the United States of America. Let’s ask God to make truth and justice triumph! Let’s ask Him to dispel the lies and deceptions of the children of darkness!

You have organized these marches in many cities in America, and named them after a Biblical event: the siege of Jericho. Jericho was the first city that the people of Israel came to after they crossed the Jordan River and entered the Promised Land. The way that God commanded the Hebrew people to conquer Jericho shows us the wonderful ways of the Lord, which are so different from our ways! The Book of Joshua tells us that Jericho was walled up and completely closed – it appeared to be an impregnable fortress! It appeared that a long siege would be necessary to conquer it by hunger, or else that huge weapons of war would be needed to break down its walls. And yet the only thing God commanded was that the people walk around the city with the Ark of the Covenant, blowing the Jubilee Trumpets, as the soldiers and people followed in perfect silence, for seven days.

God did not want to make the city of Jericho fall immediately, in order to show mercy to its inhabitants and invite them to do penance. As Saint John Chrysostom says, “The Lord, who took six days to create the heavens and the earth, took seven days to destroy a sinful city.” The Jubilee Trumpets that sounded around the city were used by the Jews to announce pardon and forgiveness. God would not have made them sound without an ending that was full of goodness. In the same way, an ending that is full of goodness inspires our prayer today, for our Country and for our President!

Even the little children walked with their mothers around the city: those little ones were the most chosen portion of all, because they embodied the innocence that overwhelmed wickedness. Thus, moral strength fought against brutal violence, faith fought against unbelief, obedience fought against arrogant rebellion, humility fought against pride, and faith in the Lord fought against the presumption of man. God revealed the superiority of the power of Good over the power of Evil through an astonishing intervention.

We too, in this hour of great tribulation for our Nation, are praying that truth will triumph over lies, justice over abuse and fraud, honesty over corruption, honor over infamy, faithfulness over betrayal, and that order will triumph over destruction.

We are the silent army of the children of Light, the humble ranks who overthrow evil by invoking God, the praying army that walks around the walls of lies and betrayal in order to bring them down.

We fight the battles of the Lord with faith and courage, carrying the Ark of the Covenant in our hearts, remaining faithful to the teachings of the Gospel of Our Lord! We do not need material strength to fight, because we have the Lord of Armies at our side! Nothing can resist the power of the prayer. The walls of the Deep State, behind which evil is barricaded, will come crashing down!

Jericho was also the place where Jesus Christ converted the tax collector Zaccheus (Luke 19: 1-10). We pray for the conversion of public officials who have become complicit in public fraud and have betrayed their oath to serve our Nation.

Along the road that led from Jerusalem to Jericho, the Good Samaritan stopped to help and care for the traveler who was attacked by robbers (Luke 10:25-37). May his fraternal charity be an example for Patriots who are called to serve our homeland that has been attacked and wounded by both internal and external enemies.

It was also in Jericho that the Lord healed Bartimaeus of his blindness (Mark 10:46-53). May the blind man’s faith spur us on to conversion, so that we place our trust once again in God and that He may hear the cry of our prayer for our beloved Nation.

We are citizens of Heaven: this is the homeland that awaits us for eternity. On this earth we are also children of a homeland that gave us birth and in which we were raised and educated, a homeland we have served with dedication and courage. Be proud, as Christians and as Patriots, to be able to give witness today to your faith in God and your love for the United States of America, for its Constitution, and for its President Donald J. Trump.

O Lord, Almighty God, prostrate before Thee we invoke Thy powerful protection in this hour of great turmoil, when darkness seems to be spreading over our beloved Nation.

Make vain the assaults of those who, blinded by vice and hatred of Thee, wish to subject our Nation and the whole world to the tyranny of sin and rebellion. Grant wisdom and courage to those who are called to decide the fortunes of the United States of America, and to those who serve their country with fidelity and honor.

Lord, bless our President and our public officials. For those who exercise the power entrusted to them from above, obtain the graces necessary to carry out their duties with integrity and justice.

O Almighty God, who many times hast manifested the power of Thy right hand at the side of Christian armies, place Thyself at the head of this army of Thy children. Let the prayer we address to Thee through the intercession of Our Lady of Guadalupe, the Patroness of the Americas, rise up to Thee, so that we may attain the freedom and peace that Thou hast promised us.

And just as in the time of Joshua, raise up holy heroes and courageous witnesses of the Faith, so also today hear the prayer we raise to Thee, and break down the walls of the City of darkness, granting victory to those who serve under Thy holy banner. Amen.

ONE NATION UNDER GOD

Former Apostolic Nuncio in the United States of America