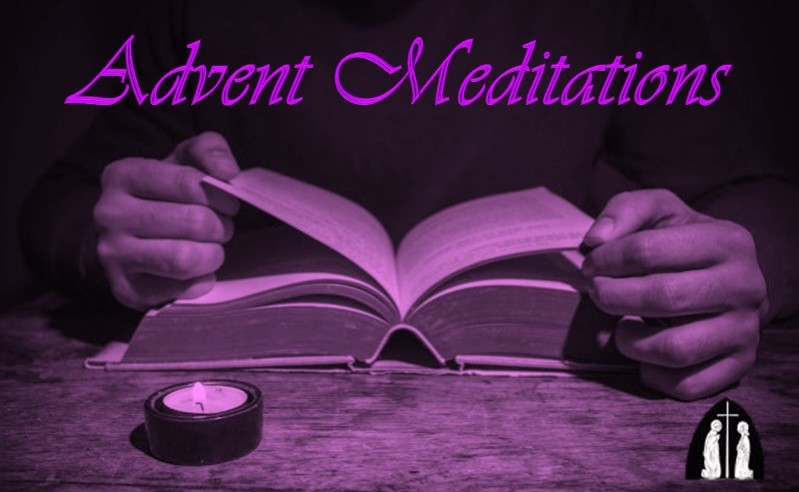 Editor’s Note: To help readers prepare spiritually for Christmas, CFN will be offering periodic meditations during Advent from Divine Intimacy, a classic volume by a Carmelite priest and master of the interior life, Fr. Gabriel of St. Mary Magdalen (1893-1953). Each meditation is numbered as it appears in the book, according to its place in the liturgical year. Hence, the following meditation is found in the First Week of Advent (Day 2 of the liturgical year). May these spiritually rich texts be an effective aid for preparing our minds and hearts to receive Our Lord anew at Christmas.

1. “Where sin abounded, grace did more abound” (Rom. 5:20). Adam’s fall brought about the destruction of God’s plan for man’s sanctification. Our first parents, created to the image and likeness of God, in a state of grace and justice, and raised to the dignity of children of God, were hurled into an abyss of misery, drawing with them the whole human race. For centuries man groaned in his sin, he could no longer call God by the sweet name of Father, he did not even dare to pronounce His Name, regarding the Most High with a sense of terror: “He is a powerful and terrible God, the God of justice and vengeance.” Sin made an insurmountable abyss between man and God, and man groaned in the depths of the abyss, utterly incapable of rising from it.

To do what man could not do, to destroy sin and restore divine sonship to the human race, a Savior was promised. The most merciful God “so loved the world, as to give His only-begotten Son” (John 3:16) for its salvation. The Word, the splendor of the Father, and the figure of His substance [cf. Heb. 1:3], became flesh in order to destroy sin and restore grace to us, that “we might once again be called, and really be the children of God” (cf. 1 John 3:1).

God wants us “all to be saved” [cf. 1 Tim. 2:4]; for this reason He gave us His Son, and with Him and through Him, all the means necessary for our salvation. Therefore, if a soul is not saved, it alone will be responsible.

2. Jesus was not satisfied with destroying sin and meriting only a sufficient amount of grace for our salvation. He did much more and He Himself declared it: “I am come that they may have life, and may have it more abundantly” (John 10:10). This plentitude of life is the plentitude of grace, the supernatural life which causes sanctity to blossom.

Sanctity is not reserved for a few; Jesus, by His Incarnation and by His death on the Cross, merited the means of salvation and sanctification for all who believe in Him. He, the All-holy, came to sanctify us, and has taught us, “Be you therefore perfect, as also Your heavenly Father is perfect” (Matt. 5:48).

Jesus did not give this precept to a chosen group of persons, nor did He reserve it for His Apostles and close friends; He proclaimed it to multitude who were following Him. St. Paul received His message and announced it to the Gentiles: “This is the will of God, your sanctification” (1 Thess. 4:3). And in our own times the Church, speaking through the great Pope Pius XI, has repeated it strongly and on many occasions to the modern world: “Christ has called the whole human race to the lofty heights of sanctity. … There are some who say that sanctity is not everyone’s vocation; on the contrary, it is everyone’s vocation, and all are called to it. … Jesus Christ has given Himself as an example for all to imitate.” And elsewhere: “Let no one believe that sanctity belongs to a few chosen people, while the rest of humanity can limit itself to a lesser degree of virtue. Everyone is included in this law; no one is exempt from it.” Jesus comes not only to save me, but to sanctify me. He is calling me to sanctity and has merited for me all the graces I need to attain it.