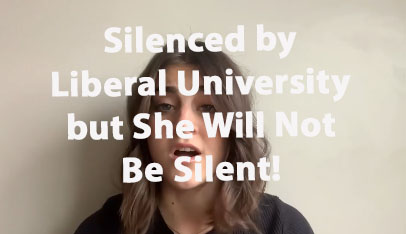 Young College Students Speak Out against the Hypocrisy of Liberalism

The Catholic Church has been warning the world about the dangers of Liberalism since the French Revolution. Liberalism pretends to offer freedom of thought and to respect all people but in fact every liberal revolution ends with the silencing of all opposition. From the French guillotine to the Stalinist gulags, liberals always repress freedom in the name of promoting it. As Pope St. Pius X warned us: ” Indeed, the true friends of the people are neither revolutionaries, nor innovators: they are traditionalist.”

This “cancel culture” that silences anyone and everyone who does not follow the Liberal party line is most evident on the campuses of our colleges and universities. After adopting policies with noble sounding language about encouraging freedom of thought and speech, in practice universities silence and oppress faculty, staff, and students who express traditional, and especially Christian, beliefs that are ruled out of order by the Liberal elites that run the universities.

Our Weekly News Roundup for October 30, 2020 highlighted such suppression on Boise State University campus when a student coffee shop was expelled from campus for allegedly supporting the police. Recently some young people have produced a short video to highlight the silencing of young voices by Boise State University. Catholic Family News commends and stands with these students for not letting themselves by silenced by the totalitarians who run our nation’s universities. Please watch and share their testimony. Keep up the good fight!