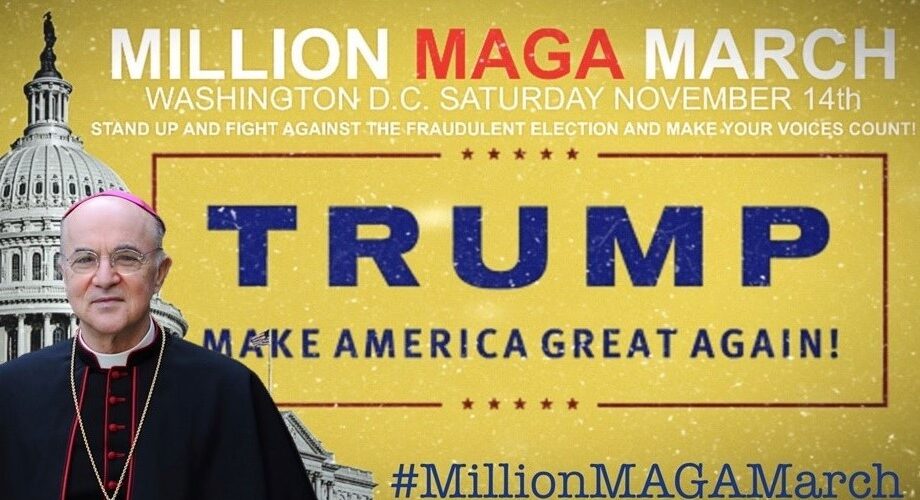 Abp. Viganò to Million MAGA March: Pray and “Trust that Justice and Truth Will Triumph”

Editor’s Note: Yesterday (Nov. 14, 2020), Archbishop Carlo Maria Viganò sent his greetings and a special prayer (available as a PDF here) to the tens of thousands of Americans gathered in Washington, D.C. for the “Million MAGA March” in support of President Donald Trump. Dr. Taylor Marshall was in attendance and delivered His Excellency’s message to a crowd gathered outside the U.S. Supreme Court building (due to time constraints, Dr. Marshall had to slightly abbreviate the message and omit the prayer composed by His Excellency for the occasion — see here for his explanation of what happened).

Allow me to address this message to you, spiritually united with all of you in the legitimate request for truth and transparency, in the face of the election fraud that is coming to light.

Some would have us believe that the people have spoken out in favor of one candidate, and they were foolish enough to tell us this while the vote-counting was still in progress. They were so sure of victory that they did not accept any dissenting voices, and even went so far as to censor the very words of the current President of the United States.

When the people do not obey media indoctrination, democracy no longer matters to the so-called Democrats: they have to resort to fraud, deception, and the manipulation of votes and consensus. But something has gone wrong: “The snare has been broken, and we have escaped” (Ps 123:7).

As Christians and honest citizens of this great and beloved Nation — which is proud to proclaim to be under God — we have a duty to trust that justice and truth will triumph, also on this occasion. And they will triumph not only through the honesty and fairness of so many people, but also and above all through our prayer. As lawyers and magistrates investigate the abuses and crimes committed, let us turn to the Lord, the Supreme Judge, through the intercession of Mary Most Holy, our powerful Advocate. This is the “Supreme Court” to which we can and must appeal, that the Will of God may be fulfilled, and Truth may triumph over falsehood.

O Lord Almighty God, Most Holy and Undivided Trinity, Who in Thy love hast deigned to redeem sinful man through the Incarnation and Passion of Our Lord Jesus Christ: prostrate before Thee we invoke Thy powerful protection in this hour of great turmoil, when darkness seems to be spreading over our beloved Nation.

O Lord God of Hosts, drive back into hell the Enemy of mankind, who by Thy eternal decree is crushed by the foot of Our Mother and Queen, Mary Most Holy. Make vain the assaults of those who, blinded by vice and hatred of Thee, wish to subject our Nation and the whole world to the tyranny of sin and rebellion against Thy Most Holy Law. Grant wisdom and courage to those who are called to direct the fortunes of the United States of America, and to those who serve their country with fidelity and honor.

Lord, bless our President, our public officials, and our pastors. For those who exercise the power entrusted to them from above, obtain the graces necessary to carry out their duties with integrity and justice.

O Almighty God, Who many times hast manifested the power of Thy right hand at the side of Christian armies, place Thyself at the head of this army of Thy children. Let the prayer we address to Thee through the intercession of Our Mediatrix, the Virgin Mary, rise up to Thee like incense, so that, resolved to observe Thy Commandments and to repent of our sins, we may attain the freedom and peace that Thou hast promised us: “Peace I leave you; My peace I give to you. Not as the world gives, do I give to you. Let not your hearts be troubled, neither let them be afraid” (Jn 14:27).

Grant, O Lord God, peace to our people. Look not upon our unworthiness, but upon the merits of the Immaculate Virgin, the Queen and Patroness of the United States of America. May she present to the Throne of Thy Majesty our humble prayers, our holy intentions and our penances.

And just as in the time of the Maccabees, Thou raised up holy heroes and courageous witnesses of the Faith, so also today hear the prayer we raise to Thee, and scatter the proud in the conceit of their hearts, granting victory to those who serve under Thy holy banner. Amen.