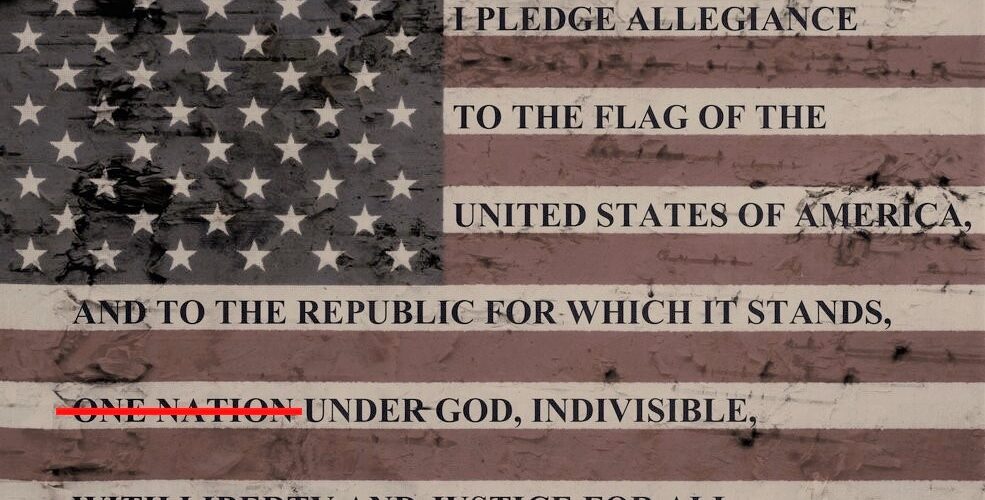 Is it Time to Remove “One Nation” from the Pledge of Allegiance?

The Most Divided Since the Civil War

It seems clearer than ever that this country is the most divided it has been since the Civil War (which may someday be called the First Civil War). Interestingly, if we compare the two time periods, many of the same issues are at the root of the divisions in both eras.

On the economic level, tariffs and the nation’s relationship to the world economy is a common issue between the pre-Civil War period and our day.  In the decades leading up to secession, tensions ran high over the imposition of tariffs. The Northern states, who were then in the early days of industrialization, wanted stiff tariffs to protect the fledgling manufacturers from foreign exploitation and competition. The Southern states generally favored free trade so they could buy cheaper goods from abroad and sell their agricultural products overseas at reduced tariffs. Generally, half the country wanted the United States to favor “America First” and protect American-made goods and the other half wanted to be absorbed into the liberal free trade global movement.

Beyond economic issues, two fundamental issues of philosophy separated the country. First, some people believed that the nation was divided into two groups: the elite and the subhuman population. The elites, who supported slavery, spoke of (and acted toward) the slave population as inhuman or subhuman beings that needed to have their entire lives regulated by elite masters. In contravention of natural law and the Church’s exhortation, the most radical sought to control and manipulate marriage among the slaves and claimed they had the power to dissolve marriages not to their liking. Although they considered slaves alive, the most radical of this element did not consider them fully human.

Likewise in our times, the one side of our division considers many people less than human or not human at all. Although they consider a baby alive, they insist it is not a human life and that the elites have total control over the continuation or termination of that life. Today’s division is even worse because even the most radical slave owners would admit that the slaves were people, even if they thought them inferior people who could not live a free life. Today, the radical abortionists consider the children they kill to be of less worth than an animal.

Beyond abortion, the radical-left Socialists today look down on most of the population as subhuman. They believe that a small elite of career politicians, Big Tech moguls, and degenerate pop stars should rule the lives of the “deplorables.” The elites should tell the masses where to go to school, what healthcare they can have, what they should recognize as marriage, what speech is permissible, etc. They claim the power to define and control marriages, dissolving them at will and forcing us to recognize depravity as holy matrimony.  The “Scam-demic” has been a great opportunity for them to push their agenda of control by forcing everyone to hide their face behind an ineffective mask to go in public and in some places locking them in their homes. The new Socialists are far more repressive than the slave masters of the 19th century.

The most recent example of this conflict between states’ rights and centralization is, again, the “Scam-demic.” The Democrats want national shutdowns and national mask mandates to force all three hundred million Americans to conform to a federal dictate, regardless of local conditions on the ground. The Republicans (President Trump and allied Governors) promoted a varied and regional approach. Each state or groups of states could make rules and issue recommendations tailored to the actual situation they faced.

The states’ rights approach is more in conformity with Catholic teaching as it respects the principle of subsidiary, which holds that the lowest level of authority should deal with a problem if possible and the higher level only intervene if the lower cannot. President Trump acted according to this principle in the Spring of 2020 by letting states take the lead, while using the federal government to supplement in areas in which they could not act effectively (for example, by procuring scarce medical supplies on their behalf).

A particular expression of this division has also resurfaced recently. For decades before 1860, a flashpoint issue was the packing of the Senate. The Northern centralizers wanted to admit new states to the union to dilute the individual influence of the Southern states. The Southern states often resisted these new states since their two new senators would shift the balance of power in the Senate. For decades, a series of compromises had to be made and broken to attempt to gloss over this division.

The elites of our day attempt the same strategy. The Democrats have struggled to control the Senate because its principle of equal representation of all geographic states (two senators per state, regardless of population) means their concentrated power centers in big cities cannot control it, since some states are not dominated by liberal Democrat cities. Therefore, the Democrats propose packing the Senate with new fabricated states such as the District of Columbia (how can a single city be a state, anyway?) and Puerto Rico. They believe these four senators that will be under their thumb will give them total control. Ironically, the framers of the Constitution specifically required the capital of the nation not be in any state so that it would be a free city for all citizens. Yet, the Democrats merely see a way to pack the Senate with more Socialist big city Marxists.

Thus, the country is once again deeply divided between (1) economic globalists and advocates for the national economy, (2) those who devalue human life and want elites to control the masses and those who seek to respect the dignity and true liberty of all people, and (3) the centralizers and the states’ rights advocates. It is true that some states on one side of these divides in 1860 are today on the other side; however, the core issues of division remain.

Major Difference: Not Even One State Anymore

Today’s geography is much more complex. The Marxist states are concentrated on the east and west coasts but also a few interspersed in what they deride as “fly-over country”: Illinois, Colorado, and New Mexico.  Yet, even within many states the deep divisions described above divide those states just as brutally as the nation. Looking at the voting maps that pervade in a time of elections, states like Georgia, Illinois, or Pennsylvania are vast red seas with one or two blue blotches dropped in them. I have spent much time in rural Illinois and the delightful people there have much more in common with the people of Oklahoma or Alabama then they do with the radical Socialists in Chicago. Yet, their voice is perpetually smothered under the tyranny of the Chicago political machine.

Thus, this second Civil War, which may be emerging from its Cold War phase this year in light of the deadly street battles in cities like Kenosha, faces much more complex geography. Small towns in North Dakota are likely allied with small towns in Oregon against places like Portland. Any conflict will not be between a geographically compact Confederacy and Union. States that share a common worldview are dispersed and the same national divisions cut deeply across many states.

To be clear, I am not predicting or desiring that the deep divisions will continue to develop into an outright shooting war. I certainly hope and pray that this will not occur, but it seems clear that the country has not been this divided and explosive since 1860. I am noting that the more complex intermingling of the two sides creates more explosive situations, as we have seen erupt in some cities. In Alabama, for example, most people didn’t run into abolitionists that lived in their state.

With such deep divisions on very basic issues, we really face the question, Are we really one nation or two nations locked in conflict? Cicero defined a commonwealth as: “an assemblage of some size associated with one another through agreement on law and community of interest.”[1] When half a people think babies are not human and that some people’s lives should be ruled by the decisions of the elites, and the other half staunchly defend the right to life and true liberty for each person, can we really claim that this assemblage of people agree on law or share a common interest? I think not.

Ultimately, to be a most perfect nation we need to be united under the reign of Christ the King. America has never enjoyed that supernatural union, but for many points in her history she did have a real union of agreement on core principles and interests. During the Second World War, for example, the nation was unified by its common commitment to fight the war. Today, in contrast, the differences between the “red” and the “blue” (to use these clichés as shorthand for all the differences) are so radically fundamental that it is hard to see any agreement on law or interest. Thus, the day may be dawning when we need to admit that we are two nations (one under God, one under Globalist elites).

Will a time come  when those two nations need to separate their sovereignty, and can that be done peacefully? All we can do is continue to pray to Our Lord that His Will in this time of conflict be done.