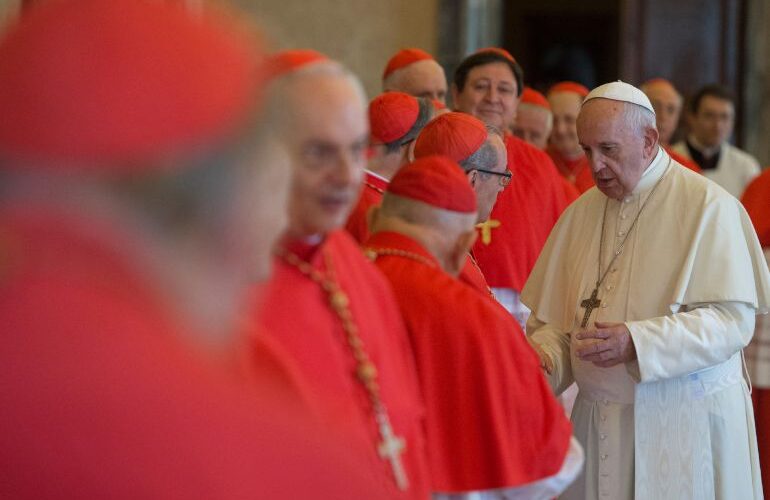 Antonio Socci: The Real Objective of the Film Francesco Is To Bring Down Trump and Elect Biden

Just this morning, Bergoglio has announced the creation of 13 new cardinals (of whom 9 are electors). They are all ultra-Bergoglians. The hasty announcement at this moment, right on the eve of the US election, is significant: Trump has strong momentum and now the Bergoglian Vatican is very afraid that he may be re-elected. Bergoglio, along with the entire globalist establishment, has declared war on Trump. If Trump really wins, then this pontificate, which is already in sharp decline, would be finished indeed, since it has crushed itself on China and been totally discredited. In the pro-Biden propaganda film that I talk about in this article, right at the end Cardinal Tagle is blatantly promoted as the one Bergoglio wants as his successor. Everything is explicit. By naming the nine new cardinal-electors today, Bergoglio wants to ensure the result of the next conclave.

The documentary film Francesco has caused an enormous outcry because of the papal “yes” to civil unions for gay couples. But is this the film’s primary purpose?

Not exactly. It was certainly the Vatican’s intention to give the greatest possible prominence to this product. In fact, last Wednesday, right before his General Audience, Pope Bergoglio received – amidst all sorts of photographs – the film’s director Evgeny Afineevsky and his collaborators, “thus giving his blessing to their work,” as Il Fatto Quotidiano wrote, in an atmosphere of such familiarity that the Argentine pope even offered Afineevsky a piece of cake since it was his birthday.

Then, the next day, there was the presentation of the apologetic documentary at the Rome Film Festival that is directed by Antonio Monda, the brother of the editor of L’Osservatore Romano, Andrea Monda (who was also present), and the premier of the film in the Vatican Gardens, where Afineevsky received the “Kinéo Movie for Humanity Award” that is given to those who promote social and humanitarian themes.

But what is the real objective being pursued? The most obvious one was self-congratulatory: Pope Bergoglio is thirsty for popularity and worldly acclaim, especially now that his pontificate is in decline and – according to his own supporters – has become totally bogged down (it’s enough to consider the Synod on the Amazon and the German Synod). Above all, he wants to recover worldly favor during these weeks in which the Vatican has been at the center of new scandals that demonstrate – on the aspect of internal reform as well – the failure of the present pontificate.

The bait that was used to get the greatest possible prominence and the unanimous applause of both the mainstream media and the progressivist elite was the sensational declaration on the homosexual question.

It was already known that when he was cardinal of Buenos Aires, Bergoglio was in favor of “civil unions” in Argentina. And we know that, as pope, he “oriented the position of the Italian Bishops’ Conference in 2015 and 2016 on the law desired by the Italian government of Matteo Renzi, accepting the formulation” (so writes Maria Antonietta Calabrò at the Huffington Post).

But he has never before made an explicit public announcement like this that contradicts the official and perennial Magisterium of the Church. The novelty of this step is therefore enormous.

On the Left in Italy there are even those who have interpreted it as a positive signal for the approval of the “Zan” law [against homophobia] (which according to the Italian Bishops’ Conference risks causing “liberticide drift” against non-aligned opinions).

The papal utterance has thrown the Catholic world into bewilderment and confusion. But Bergoglio is not worried about this. For him questions of doctrine or morals or spirituality are useful only instrumentally, in service of an objective that is always only and totally political.

And so what is the primary political objective of this operation? It is the biggest target of all, the one against which the entire media system and all of the globalist elites have been unleashed: Donald Trump.

It is he who undermines the Obamian and Clintonian project that, amidst the frenzied financialization of the Western economy, imposes China as the factory of the world at the expense of middle class and Western workers (and, curiously, the most deadly attack on Trump’s re-election – which was all but certain last January – came upon him precisely from China: Covid-19).

The pontificate of Bergoglio is the child of the Obama/Clinton era and shares their globalist ideology, containing both immigrationism and ecologist fanaticism. Trump’s re-election would be a very harsh blow for this ideology and this power block.

So they are doing everything they can to stop him, and even Bergoglio is on board the anti-Trump campaign, because the Catholic vote is decisive in the US election. Thus, just a few days before the vote, this film has been premiered which is an incredible pro-Biden super-advertisement.

It’s enough simply to watch the film’s trailer. It begins with Covid in an ecologist key, because according to Bergoglian ideology the virus was not produced by the Chinese regime but by our offenses against the environment (there are even images of an earthquake – who knows what that has to do with ecology).

Then there is the glorification of Bergoglio as a world star, the “purifier” of the Church and the “savior” of humanity. And look at the images that are thrown together: first the film shows footage related to George Floyd (whose tragic case was used without reason against Trump), then it “casually” shows Joe Biden next to Bergoglio as he speaks to the US Congress in 2015, and finally it shows the face of the “prophetess” of the ecologist religion, Greta Thunberg, framed in Saint Peter’s Square as she greets Bergoglio.

At this point the film launches into a long immigrationist rally that culminates at the wall between the USA and Mexico. And then the image of Trump appears, and Bergoglio’s words of fire are heard thundering: “A person who thinks only about building walls and not building bridges is not a Christian.”

It is the famous attack against Trump that Bergoglio made during the 2016 electoral campaign. It is re-proposed today in this “electoral” trailer despite the fact that it is known that the wall with Mexico was also wanted by the Democrats, and above all despite the fact that after four years Trump – distinct from his predecessors – has not started even one war and has made many peace agreements around the world. At the end, Cardinal Tagle appears (a Filipino of Chinese origin), Bergoglio’s favored candidate to succeed him.

This is Bergoglio’s sensational intrusion into the US Presidential campaign, just ten days before the election. As you may recall, just a few days ago Bergoglio refused to receive the US Secretary of State Mike Pompeo, who went to Rome to discourage the renewal of the China-Vatican agreement, because – Bergoglio said – meeting with Pompeo would have been interfering in the election campaign.

But actually Bergoglio – who in the meantime renewed the nefarious agreement with China – had a sensational campaign rally in store: the pro-Biden propaganda film, Francesco.