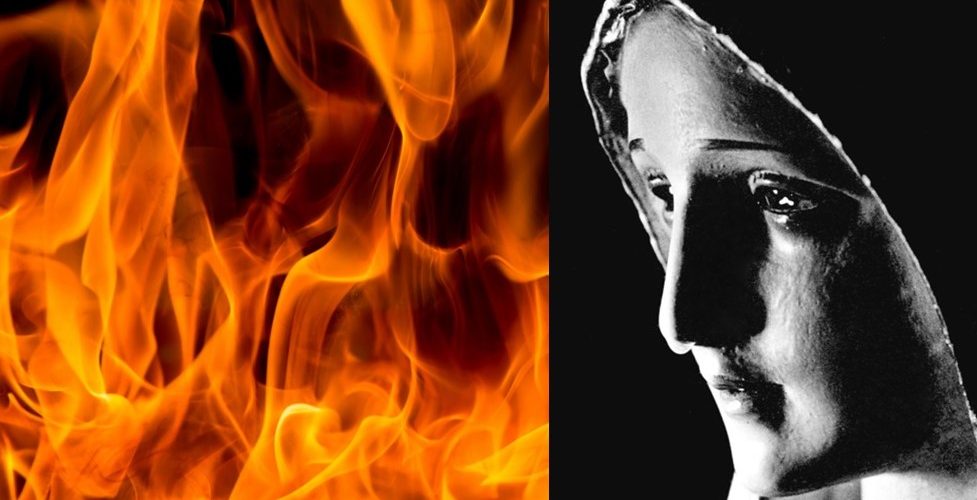 Editor’s Note: The word “hell” is capitalized and bolded by the author, even within quotes, for effect.

“Then, looking very said, Our Lady said: ‘Pray, pray very much, and make sacrifices for sinners; for many souls go to hell, because there are none to sacrifice themselves and to pray for them.'” ~ Fourth Apparition at Fatima (Aug. 19, 1917), as recorded in Sister Lucia’s Fourth Memoir

For the glory of God and for the salvation of souls, the theme of “The Four Last Things” is a traditional meditation in our One, Holy, Catholic, and Apostolic Church.  The Four Last Things are: Death, Judgment, Heaven, and Hell. This Third Sunday in Lent, we will reflect upon HELL. We will leave the topic of Heaven on hold until next weekend, Laetare Sunday. Laetare means “rejoice” and, hence, next week is better suited for the topic of Heaven.

There is a heresy out and about today that everyone goes to Heaven, no matter what religion they are, if any. Even atheists go to Heaven, according to this far-left fable without a sound theological basis. This is not Biblical and it is not traditional Catholic teaching. There is another approach to this heresy which asks, “Is there a well-founded hope that there is no one in HELL?” The answer is that there is no well-founded hope that HELL is empty. This misdirection is no more than a lot of fancy words designed to lead one to think that no one is in HELL; the equivalent of infernal smoke and lying mirrors.

The Message of Fatima is a compendium of Catholic Church teaching and a reaffirmation of the Gospel. It is an answer to our troubled times of doctrinal confusion. The Fatima Message affirms the traditional teaching of our One, Holy, Catholic, and Apostolic Church, which is being denied today. One of those truths denied by heretics today, but affirmed at Fatima, is that HELL is filled with people.

I have led many pilgrimages to Fatima, Portugal. Each time I go, I warn the pilgrims on the bus ride from Lisbon that the candle rack at Fatima ‘looks like HELL.’ People are taken aback by that comment until I immediately explain that is was constructed on the spot where the three shepherd children were shown a vision of HELL by Our Lady of Fatima on July 13, 1917. The candles are simple wax candle sticks of various sizes that are placed in the soot-blackened metal rack. Once there, the candles twist, turn, and melt upon one another, until a worker at the sanctuary turns on the natural gas valve, resulting in huge flames and billows of smoke to melt all of the twisted candles and prepare for new ones to be added. It was meant to ‘look like HELL’ and it certainly did.

(During my November 2017 pilgrimage to Fatima, the Candle Rack had been fitted with a metal canopy of sorts to contain the flames and smoke so that the representation of Hell was no longer as dramatic. Perhaps this was a concession to the environment in keeping with Laudato Si, issued in 2015. In any event, the Candle Rack’s teaching of the dogma of HELL is sadly no longer as effective.[1])

The vision of HELL that was shown to the three shepherd children by Our Lady of Fatima was described by Lucia, the eldest seer, as follows:

“She opened her hands once more, as she had done the two previous months. The rays appeared to penetrate the earth, and we saw, as it were, a vast sea of fire. Plunged in this fire, we saw the demons and the souls [of the damned]. The latter were like transparent burning embers, all blackened or burnished bronze, having human forms. They were floating about in that conflagration, now raised into the air by the flames which issued from within themselves, together with great clouds of smoke. Now they fell back on every side like sparks in huge fires, without weight or equilibrium, amid shrieks and groans of pain and despair, which horrified us and made us tremble with fright (it must have been this sight which caused me to cry out, as people say they heard me). The demons were distinguished [from the souls of the damned] by their terrifying and repellent likeness to frightful and unknown animals, black and transparent like burning coals. That vision only lasted for a moment, thanks to our good heavenly Mother, who at the first apparition had promised to take us to Heaven. Without that, I think that we would have died of terror and fear.”

After the vision of HELL, Sister Lucia wrote: “Terrified and as if to plead for succor, we looked up at Our Lady, who said to us, so kindly and so sadly: ‘You have seen HELL where the souls of poor sinners go. To save them, God wishes to establish in the world devotion to my Immaculate Heart.’”

Also on July 13, 1917, Our Lady taught the three shepherd children that “when you pray the Rosary, say after each Mystery: O my Jesus, forgive us our sins, save us from the fires of HELL. Lead all souls to Heaven, especially those who are most in need.” The next month, on August 19, she exhorted the little seers again, saying: “Pray, pray very much, and make sacrifices for sinners, for many souls go to HELL because they have no one to make sacrifices and to pray for them.”

The traditional 1891 Baltimore Catechism (#3), “Lesson 37, On the Last Judgment & Resurrection, HELL, Purgatory, & Heaven”, teaches the following [with my comments in brackets]:

A. HELL is a state to which the wicked are condemned, and in which they are deprived of the sight of God for all eternity, and are in dreadful torments. [Torments described above, as seen by Lucia, Francisco, and Jacinta at Fatima.]

Q. 1398. Are the rewards in heaven and the punishments in HELL the same for all who enter into either of these states?

A. The rewards of heaven and the punishments in HELL are not the same for all who enter into either of these states, because each one’s reward or punishment is in proportion to the amount of good or evil he has done in this world. But as Heaven and HELL are everlasting, each one will enjoy his reward or suffer his punishment forever.

A. We should bear always in mind these words of our Lord and Savior Jesus Christ: “What doth it profit a man if he gain the whole world and suffer the loss of his own soul, or what exchange shall a man give for his soul? For the Son of Man shall come in the glory of His Father with His angels; and then will He render to every man according to his works.” [Matt. 16:26-27]

From the traditional Douay-Rheims Bible [with my comments in brackets]:

“And fear ye not them that kill the body, and are not able to kill the soul: but rather fear him that can destroy both the soul and body in HELL.” (Matt. 10:28)

“And if thy eye scandalize thee, pluck it out, and cast it from thee. It is better for thee having one eye to enter into life, than having two eyes to be cast into HELL fire.” (Matt. 18:18) [The ‘fires’ of HELL are reinforced by the Fatima Message.]

“You serpents, generation of vipers, how will you flee from the judgment of HELL.” (Matt 23:33) [They try to ‘flee’ by denying that anyone goes to HELL.]

“And it came to pass, the beggar died, and was carried by angels into Abraham’s bosom.  And the rich man also died: and he was buried in HELL.” (Luke 16:22)

“But the fearful, and unbelieving, and the abominable, and murderers, and whoremongers, and sorcerers, and idolaters, and all liars, they shall have their portion in the pool burning with fire and brimstone, which is the second death.” (Apoc. 21:8) [And the impious dare to say that there is no one in the fires of HELL?]

St. Teresa of Avila wrote of seeing souls fall into HELL like snowflakes.

St. Alphonsus Maria de Liguori: “Poor Judas! Above seventeen hundred years have elapsed since he has been in HELL, and his HELL is still only beginning.”

St. Clement of Alexandria: “All souls are immortal, even those of the wicked. Yet, it would be better for them if they were not deathless. For they are punished with the endless vengeance of quenchless fire. Since they do not die, it is impossible for them to have an end put to their misery.”

St. Cyprian of Carthage: “The wicked bodies of the condemned shall simmer and blaze in those living fires.”

St. Francis de Sales: “Represent to yourself a dark city all burning and stinking with fire and brimstone. The damned are in the depth of HELL within this woeful city, where they suffer unspeakable torments in all their senses and members. Consider above all the eternity of their pains, which above all things makes HELL intolerable.”

St. Thomas Aquinas: “That the saints may enjoy their beatitude and the grace of God more richly, a perfect sight of the punishment of the damned is granted them.”

St. John Bosco: “If you die as an unbeliever, you will be damned and lost forever.”

St. Francis Xavier: “All who die without the Faith are in HELL.”

St. Benedict Joseph Labre: “Meditate on the horrors of HELL which will last for eternity because of one easily-committed mortal sin. Try hard to be among the few who are chosen. Think of the eternal flames of HELL, and how few there are that are saved.”

St. Augustine: “Not all, nor even a majority, are saved…. They are indeed many, if regarded by themselves, but they are few in comparison with the far larger number of those who shall be punished with the devil.”

Saint Bernard of Clairvaux: “The road to HELL is paved with good intentions.”

St. Anthony Mary Claret: “A multitude of souls fall into the depths of HELL. And it is of the Faith that all who die in mortal sin are condemned for ever and ever.”

Someone once said that he did not believe in HELL to Padre Pio. Without missing a beat, Padre Pio responded: “You will when you get there.” Indeed, the most likely people to go to HELL are those who do not believe that HELL exists – or that if it does, no one goes there.

Anyone who dies with just one unrepented mortal sin will go to HELL for all eternity.  You can remedy this by going to Confession and repenting of your sins. Firmly resolve with the help of God’s grace, to confess your sins, to do penance, and to amend your life.

[1] See here and here for further articles by Fr. Cizik on other disturbing innovations at the Fatima Sanctuary.