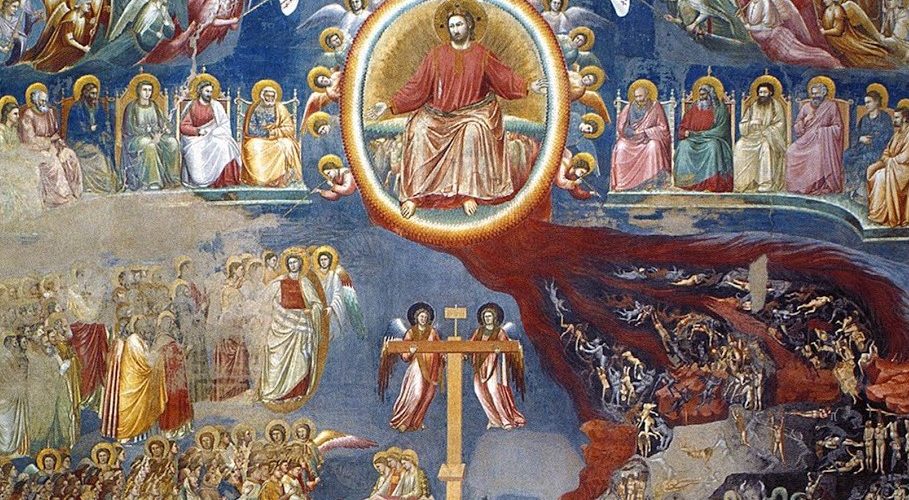 Editor’s Note: The words “judgment”, “judge”, and “judged” are capitalized and bolded by the author, even within quotes, for effect.

See here for Part I of this series.

For the glory of God and for the salvation of souls, the theme of “The Four Last Things” is a traditional meditation in our One, Holy, Catholic, and Apostolic Church.  The Four Last Things are: Death, Judgment, Heaven, and Hell. During this second week of Lent, we will reflect upon JUDGMENT.

We have forty days of Lent to prepare for our final JUDGMENT.Time may be quickly running out for some of us.

In the Biblical account of Jonah and the whale, Jonah was directed by God to announce to the Ninevites to repent of their sins and reform their lives within forty days lest they be destroyed. Upon entering this enormously large city, Jonah proclaimed the Word of the Lord: “Yet forty days and Nineveh shall be destroyed” (Jonas 3:4). And the people of Nineveh believed in God. They proclaimed a fast and put on sackcloth, from the greatest to the least. The king himself cast aside his royal robes and clothed himself in sackcloth and sat in ashes, calling to mind Ash Wednesday. The king proclaimed a fast, calling the citizens to turn away from their evil ways. When God saw that the Ninevites had turned from their evil ways, He had mercy on them and did not carry out His threatened punishment of destruction. Nineveh repented and was saved from a terrible JUDGMENT.

The Message of Fatima is a compendium of Catholic Church teaching and a reaffirmation of the Gospel. The Message of Fatima is an answer to our troubled times of doctrinal confusion. The Fatima Message affirms the traditional teaching of our One, Holy, Catholic, and Apostolic Church, which is being denied today. Fatima teaches us that unrepentant sinners at their final JUDGMENT will be thrown into the fires of hell for all eternity, never to escape. One of the consistent messages of Fatima is for us to pray for the conversion of sinners and to make reparation for sins.

If sinners repent and convert, they will cease offending Almighty God and will be on the path to Heaven. We must pray for their conversion. Then, we all must make reparation to repair the damages due to sin. Reparation can be made through prayers, sacrifices, and offering up our sufferings.

In 1916, the Angel of Peace appeared to the three shepherd children of Fatima three times. Also known as the Guardian Angel of Portugal, he said: “Make of everything you can a sacrifice and offer it to God as an act of reparation for the sins by which He is offended, and in supplication for the conversion of sinners.”

On May 13, 1917, during her first apparition, Our Lady of Fatima asked the three shepherd children: “Are you willing to offer yourselves to God to bear all the sufferings He wants to send you, as an act of reparation for the sins by which He is offended, and for the conversion of sinners?” Lucia answered: ‘Yes, we are willing.’ Our Lady then promised: “You are then going to have much to suffer, but the grace of God will be your comfort.”

On July 13, 1917, just before showing Lucia, Francisco, and Jacinta a vision of hell, the Mother of God said: “Sacrifice yourselves for sinners, and say often to Jesus, especially whenever you make a sacrifice: O Jesus, it is for love of Thee, for the conversion of sinners, and in reparation for the sins committed against the Immaculate Heart of Mary.” The children then beheld a vision of sinners who had gone to hell and were in great torment.

Shortly after the vision of hell, Our Lady said she would come later to ask for the Consecration of Russia and the Communion of Reparation on the First Saturdays. She then said that if her requests were heeded, Russia would be converted.

Sometimes, Jacinta shed some tears because of the discomfort which a penitential rope around her waist caused her. Lucia told her on several occasions to take it off, and she replied, “No! I want to offer this sacrifice to Our Lord in reparation and for the conversion of sinners.”

The traditional 1891 Baltimore Catechism (#3), “Lesson 37, On the Last Judgment & Resurrection, Hell, Purgatory, & Heaven”, teaches the following [with my comments in brackets]:

A. Christ will JUDGE us immediately after our death, and on the last day.

Q. 1372. What is the JUDGMENT called which we have to undergo immediately after death?

A. The JUDGMENT we have to undergo immediately after death is called the Particular JUDGMENT.

Q. 1373. Where will the Particular JUDGMENT be held?

A. The Particular JUDGMENT will be held in the place where each person dies, and the soul will go immediately to its reward or punishment.

Q. 1374. What is the JUDGMENT called which all men have to undergo on the last day?

A. The JUDGMENT which all men have to undergo on the last day is called the General JUDGMENT.

Q. 1375. Will the sentence given at the Particular JUDGMENT be changed at the General JUDGMENT?

A. The sentence given at the Particular JUDGMENT will not be changed at the General JUDGMENT, but it will be repeated and made public to all.

Q. 1376. Why does Christ JUDGE men immediately after death?

A. Christ JUDGES men immediately after death to reward or punish them according to their deeds.

A. We may daily prepare for our JUDGMENT by a good examination of conscience, in which we will discover our sins and learn to fear the punishment they deserve. [In addition, go to Confession.]

Q. 1378. What are the rewards or punishments appointed for men’s souls after the Particular JUDGMENT?

A. The rewards or punishments appointed for men’s souls after the Particular JUDGMENT are Heaven, Purgatory, and Hell.

Q. 1387. If every one is JUDGED immediately after death, what need is there of a General JUDGMENT?

A. There is need of a General JUDGMENT, though every one is JUDGED immediately after death, that the Providence of God, which, on earth, often permits the good to suffer and the wicked to prosper, may in the end appear just before all men. [We will all see at the General JUDGMENT that the wicked did not ‘get away’ with their crimes.]

A. By “the Providence of God” is meant the manner in which He preserves, provides for, rules and governs the world and directs all things by His infinite Will.

Q. 1389. Are there other reasons for the General JUDGMENT?

A. There are other reasons for the General JUDGMENT, and especially that Christ Our Lord may receive from the whole world the honor denied Him at His first coming, and that all may be forced to acknowledge Him their God and Redeemer.

Q. 1390. Will our bodies share in the reward or punishment of our souls?

A. Our bodies will share in the reward or punishment of our souls, because through the resurrection they will again be united to them.

Q. 1391. When will the General resurrection or rising of all the dead take place?

A. The general resurrection or rising of all the dead will take place at the General JUDGMENT, when the same bodies in which we lived on earth will come forth from the grave and be united to our souls and remain united with them forever either in Heaven or in Hell.

A. The bodies of the just will rise glorious and immortal.

A. The bodies of the damned will also rise, but they will be condemned to eternal punishment.

From the traditional Douay-Rheims Bible [with my comments in brackets]:

“I charge thee, before God and Jesus Christ, Who shall JUDGE the living and the dead, by His coming, and His kingdom” (2 Tim. 4:1).

“And He commanded us to preach to the people, and to testify that it is He who was appointed by God, to be JUDGE of the living and of the dead” (Acts 10:42).

“They therefore being brought on their way by the Church, passed through Phenice, and Samaria, relating the conversion of the Gentiles; and they caused great joy to all the brethren” (Acts 15:3). [The conversion of sinners is rooted in Sacred Scripture and Sacred Tradition.]

“He must know that he who causeth a sinner to be converted from the error of his way, shall save his soul from death, and shall cover a multitude of sins” (Jam. 5:20). [The conversion of sinners is reinforced by the Message of Fatima.]

St. Alphonsus Maria de Liguori: “The books of conscience are opened, and the JUDGMENT begins.”

St. Augustine: “Great is already the punishment of sin when the fear of the future divine JUDGMENT is lost.”

Padre Pio: “Don’t JUDGE others if you don’t want to be JUDGED yourself. In the same way that you treat your neighbor you will be treated by God.”

St. John Chrysostom: “A JUDGMENT, terrible to sinners, but desirable and sweet to the just.”

St. Alphonsus Maria de Liguori: “The last JUDGMENT shall fill sinners with terror, but will be a source of joy and sweetness to the elect; for Lord will then give praise to each one according to his works.”

Every year, we have forty days of Lent to prepare for our final JUDGMENT. Prepare wisely, my friends. Firmly resolve, with the help of God’s grace, to confess your sins, to do penance, and to amend your life.