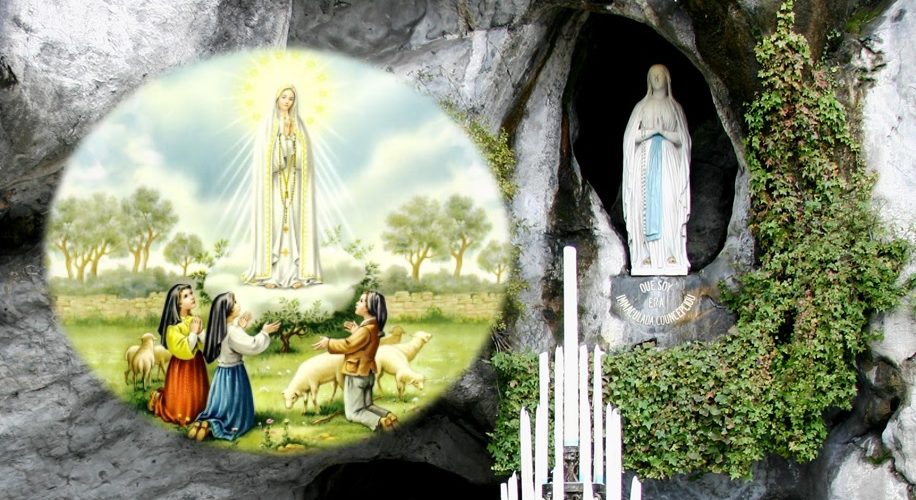 Along the Estremadura Mountain Range in Portugal at the Cova da Iria in Fatima, the message delivered by Our Lady to Jacinta, Francisco, and Lucia echoes the message imparted by her some sixty years prior in the foothills of the Pyrenees Mountains at Lourdes, France to St. Bernadette Soubirous.

February 11th is the Feast of Our Lady of Lourdes. Our Lady began appearing to St. Bernadette in Lourdes on February 11, 1858. At the direction of Our Lady, St. Bernadette discovered a miraculous spring of healing water. From that time to this very day, that water continues to provide health and strength to those with physical afflictions.

Likewise, at Fatima, Portugal, where Our Lady appeared in 1917, there is a source of water that appeared in answer to prayers from and for thirsty pilgrims. There are not as many physical healings at Fatima, as compared to Lourdes; but the people of Europe have a saying: “Fatima is for the soul, as Lourdes is for the body.” Nevertheless, Lourdes does have a treasure of spiritual gifts to ponder – and Fatima does have its share of physical healings.

In the classic movie, The Song of Bernadette, a converted atheist doctor proclaims at the end of the movie: “For those who believe, no explanation is necessary. For those who do not believe, no explanation is possible.” However, at Fatima, in the greatest predicted public miracle since the Resurrection of Christ, over 70,000 people over a radius of 70 miles witnessed the great Miracle of the Sun. This evident demonstration of the power of God remarkably led the atheistic Communist newspapers of Portugal to admit that a miracle had taken place at Fatima, on October 13, 1917, just as Our Lady had predicted.

When she was asked her name at Lourdes in 1858, Our Lady replied: “I am the Immaculate Conception.” The dogma of Mary’s Immaculate Conception was infallibly defined less than four years earlier by the great Pope Pius IX on December 8, 1854.  The Mother of God was affirming the truth of the dogma declared by the holy Pontiff, which was then opposed by a liberal minority in the Church.

Interestingly, Pope Pius IX was born on May 13, 1792, a Sunday – and Our Lady’s first appearance at Fatima was likewise on a Sunday, May 13, 1917. The Pope of the Immaculate Conception is thus connected with the Immaculate Heart of Our Lady of Fatima.

It is said that at the time most of the people of Lourdes prayed the six-decade Rosary. Discalced Carmelite communities prayed and adopted as a traditional part of their habit the six-decade Brigittine Rosary at the direction of their founder, St. Teresa of Avila. Of note, the additional decade added to the traditional five Joyful Mysteries is that of the Immaculate Conception. The decade for the Immaculate Conception, which is the Mystery highlighted at Lourdes, is placed first, ahead of the Annunciation.

Lucia of Fatima would eventually become a Discalced Carmelite nun and live at the cloistered Carmelite convent of Saint Teresa in Coimbra, Portugal with her name in religion being “Sister Maria Lucia of Jesus and the Immaculate Heart.” Bernadette of Lourdes considered joining the Carmelites, but her poor health precluded her from entering into the rigors of such an austere community. Hence, she joined the Sisters of Charity at their motherhouse in Nevers, France, receiving the name of Sister Marie-Bernarde.

St. Bernadette was a poor peasant girl from France. Jacinta, her brother Francisco, and their cousin Lucia were poor shepherd children from Portugal. It is to the poor and lowly that Our Lady chose to appear. So, let no one here think that they are not capable, with the help of Our Lady, to do great good for the Church and the world.

St. Bernadette died as a nun at the young age of 35 of tuberculosis. When she was asked, “Why don’t you venture from the convent and go to Lourdes to get healed?” she responded: “The spring is not for me.” Likewise, Francisco and Jacinta died of the Spanish Influenza soon after Our Lady’s apparitions at Fatima at the ages of eight and seven, respectively. Our Lady of Fatima had revealed that she would take them to Heaven soon. They, along with Bernadette, are now saints in Heaven. So, do not let your upcoming death or a loved one’s death discourage you. These young saints all looked forward to their death as the entrance into the eternal happiness of Heaven.

May the blood of the martyrs and the examples of St. Bernadette, the Fatima children, and the great Pope Pius IX inspire us as we make our way to God while battling against the unbelievers of our day. May we live each and every day of our lives in accord with the messages of Fatima and Lourdes. May we do penance, pray the Rosary every day, and wear the Brown Scapular. This will bring us peace in this life and one day happiness forever in the life of the world to come.

This article has been updated since publication.