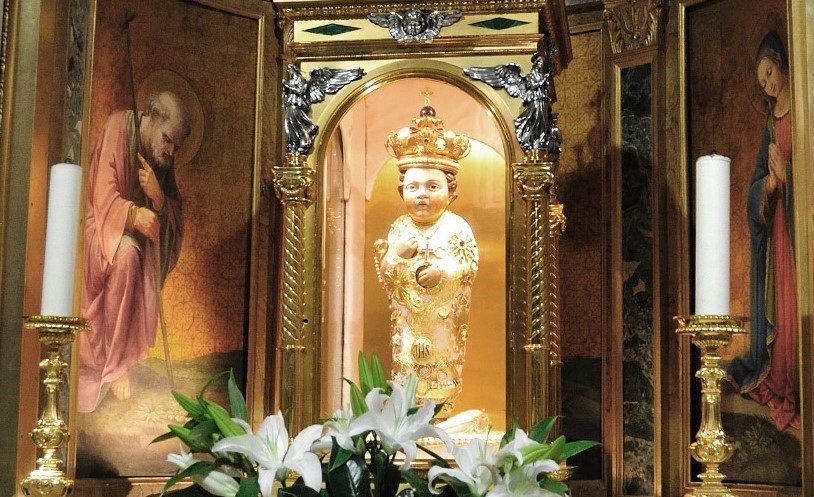 On the Feast of the Purification of the Blessed Virgin Mary (February 2), often referred to as Candlemas Day, candles are blessed in commemoration of Simeon’s prophecy proclaiming that the Divine Child Jesus was “a light to the revelation of the Gentiles” (Luke 2:32).

In recent times, it seems that Rome is returning to its pagan roots, with the tolerance of many false religions and creeds. As Chesterton would say, “Tolerance is the virtue of the man without convictions.” This is epitomized by the welcoming of the false goddess from South America, Pachamama, into Rome at the Vatican in October of 2019. Sacred Scripture teaches: “For all the gods of the Gentiles are devils” (Ps. 95:5). This tolerance of false religions, creeds, and idols seems to have been foretold in a vision of Anne Catherine Emmerich (1774-1824), a German Augustinian nun, stigmatist, and mystic.

In Rome, the Divine Child Jesus, affectionately known there today as ‘the Bambino of Aracoeli,’ was announced to a Roman Emperor, amidst a great supernatural light, before the Birth of Christ, as “the Son of God Who will one day overthrow all the gods of Rome.” During the traditional forty-day Christmas season in the Catholic Church, ending on Candlemas Day, a statue of the Bambino of Aracoeli is especially venerated in the Basilica of Santa Maria in Aracoeli on Capitoline Hill in Rome. In English, the Basilica is known as ‘Saint Mary of the Altar of Heaven.’ The story of the Bambino tells of the Christ Child and His Virgin Mother appearing amidst great light in pagan Rome before He was born in Bethlehem.

In the time before Christ, the site of Santa Maria in Aracoeli on Capitoline Hill was occupied by a Roman temple dedicated to the false goddess Juno. At that time, the Roman Senate, in admiration of the great accomplishments of Emperor Octavian Augustus, passed a decree to worship him as a god. Augustus objected to receiving such divine honors and went up Capitoline Hill to the Temple of Juno to discern.

Once atop the hill, a Tiburtine Sibyl delivered an oracle to the Emperor, which included: “I see clear signs that justice will be done … Soon, a King destined to rule forever will arrive from Heaven, present in mortal flesh, in order to judge the world.” As she was speaking, amid great supernatural light, Augustus beheld a marvelous vision of the Blessed Virgin Mary holding the Infant Jesus, with an altar below them.

From the heavens, a voice announced: “This Virgin will receive in Her womb the Savior of the world … This is the altar of the Son of God!” Some accounts add: “Who will one day overthrow all the gods of Rome!” Upon orders from Augustus, an imperial altar to be known as Aracoeli (the Altar of Heaven) was dedicated on that spot to the “Son of God of Heaven.” Indeed, Our Lord and God, Jesus Christ, would be born during the reign of Augustus (27 B.C. – A.D. 14).

In the year of Our Lord 313, another Roman Emperor, Constantine, faced a formidable enemy force at the Milvian Bridge. Prior to the battle, he saw a Cross of Light in the sky along with the Latin words, In Hoc Signo Vinces, translated as: “In this sign, you will conquer.” Constantine then had his soldiers place the Holy Cross, the Christian symbol of Christ’s victory over sin, death, and paganism on their shields and banners. His Roman army then won a decisive victory.

There was no dialogue with the pagans and no respect shown for their false religion. Rather, the Temple of Juno was unceremoniously destroyed and, on its ruins, rose up the spiritual refuge from pagan Rome that exists today: Santa Maria in Aracoeli, a symbol of the triumph of Catholicism over paganism.

Near the end of the 15th century, a statue of the Divine Child Jesus was carved by a Franciscan friar out of olive wood from the Garden of Gethsemane. Unable to find suitable colors for the image, the friar fell asleep. When he awoke, to his astonishment, the Christ Child was fully painted – attributed to the hands of angels. The Bambino worked many miracles in the Holy Land before being ordered to Rome by the Franciscan Curia. A storm at sea resulted in the Bambino falling overboard into the raging waters. However, the Bambino miraculously made its way to land on the shores of Livorno, Italy in 1647, washing up at the feet of a Franciscan friar. The Divine Child Jesus was then fittingly enshrined at the then-Roman headquarters of the Franciscan Order, Santa Maria in Aracoeli. The Franciscans still are stationed at this venerable basilica.

Known to Italians as Santo Bambino, this image of the Infant Jesus was crowned by Pope Leo XIII for the many miracles granted to its devotees.[1] During the Christmas season, the Nativity scene of the Aracoeli Basilica, featuring the Bambino, is the most venerable in all of Rome. Pilgrims climb 124 steps to reach the entrance to this historic basilica high on Capitoline Hill.

On October 4, 2019, on the Feast of Saint Francis of Assisi, an outrageous event took place in the Vatican Gardens not far from the Franciscan Basilica honoring the Bambino. With Pope Francis and other high ecclesiastical dignitaries looking on, numerous persons were photographed prostrate on bended knee before several images of the South American goddess Pachamama. One of those persons was a Franciscan friar. A woman, dressed as a pagan shaman shaking rattles that symbolized pagan fertility gods, danced around the nude images.

Ven. Anne Catherine Emmerich foretold: “I saw many aged Priests, some of them Franciscans, and one, in particular, a very old man, weeping bitterly and mingling their tears with those of others younger than themselves. I saw other tepid souls, willingly acceding to conditions hurtful to religion.”

Pachamama then was processed to the Basilica of Saint Peter and placed before the Tomb of our first Pontiff in the presence of Pope Francis. During the entire Amazon Synod (Oct. 6-27, 2019), numerous images of this disgusting bare-breasted pregnant idol were enshrined in the Carmelite Church of Santa Maria in Transpontina, where numerous pagan prayer ceremonies took place. Ironically, this church is dedicated to Our Lady of Mount Carmel, who is associated with the Prophet Elijah overthrowing the false gods of Baal (3 Kings 18:17-46). The name of this church in English is ‘Saint Mary After the Bridge.’

Bringing to mind the victory of Saint Constantine at the Milvian Bridge, images of the pagan idol Pachamama were collected from the desecrated Carmelite church by a devout Catholic gentleman and brought to Ponte Sant’ Angelo (the ‘Bridge of the Angel’) in Rome. These unholy idols were then unceremoniously thrown, like the garbage they are, into the Tiber River, further polluting, but yet ‘at home,’ in the Tiber’s already squalid waters.

Of this incident, which elicited praise from many devout Catholics, Pope Francis said: “[A]s bishop of the diocese, I ask pardon of the people who were offended by this act.” The Bishop of Rome later received a bowl with earth and various plants, that could be linked to Pachamama, which were then reverently placed on the altar for the closing Mass of the Amazon Synod. The story of this false South American god, new to Rome, continues to darken the minds of Christians everywhere and to encourage pagans to cling to their diabolical idols. May the “Light to the revelation of the Gentiles,” Our Lord Jesus Christ, the Bambino, bring an end to this new false god of Rome, imported from the primitive pagan cultures of South America.

In His ‘Great Commission,’ Our Lord and God, Jesus Christ, said to go and make disciples of all nations. Christ the King did not say to go out and dialogue; to respect other religions; to compromise our Faith; and to never proselytize. The Catholic Church’s mission is to change the world, not to let the world change it. Just as the Bambino of Aracoeli overthrew all the false gods of Rome, so may we work with Him and His Blessed Virgin Mother to overthrow all of the false religions, all of the false idols, and all of the false teachings of our time.

With Christ as our Light, may we battle to defend our One, Holy, Catholic, and Apostolic Faith against all odds and steadfastly resist any semblance of religious indifferentism or anti-Catholicism, no matter who seems to be promoting it.In Nomine Patris, et Filii, et Spiritus Sancti. Amen.