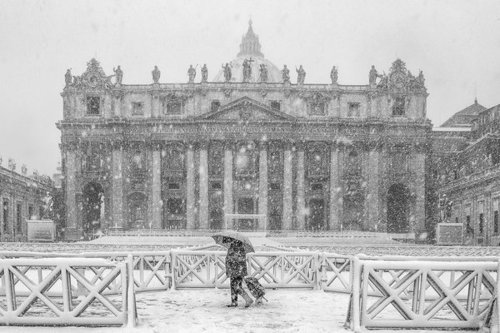 Six Long Years of Francis: Outlasting the Long Winter of This Pontificate

Where I live in northern Colorado, we were in the midst of a nasty March storm yesterday, which began as freezing rain and escalated into blizzard conditions with wind gusts of around 50 mph.

For some reason, the storm made me think of the rather humorous “holiday” celebrated here in America every February 2 (which, liturgically, is Candlemas): Groundhog Day, the day on which the legendary Punxsutawney Phil (an actual groundhog) is “awakened from his burrow” (man-made, climate-controlled habitat) in Punxsutawney, Pennsylvania and is said to predict either the coming of an early spring or six more weeks of winter, all based on whether or not he sees his shadow. Apparently, this year Phil predicted an early spring:

Needless to say, I don’t consider Punxsutawney Phil to be an accurate source of weather forecasting, but one phrase associated with Groundhog Day did seem quite apropos as I listened to the frigid wind howl outside: six more weeks of winter. And the weather outside matched perfectly the tone of another phrase which came to mind: six long years of Francis.

Yesterday, March 13, 2019, was the sixth anniversary of the election of Jorge Mario Cardinal Bergoglio as the Roman Pontiff—the Successor of St. Peter and Vicar of Christ on earth. Vatican News even produced a feel-good promo video for the occasion:

In the words of Canon Law,

“The bishop of the Roman Church, in whom continues the office given by the Lord uniquely to Peter, the first of the Apostles, and to be transmitted to his successors, is the head of the college of bishops, the Vicar of Christ, and the pastor of the universal Church on earth. By virtue of his office he possesses supreme, full, immediate, and universal ordinary power in the Church, which he is always able to exercise freely.” (can. 331)

Pope Francis has certainly exercised his authority quite freely, albeit mostly to spread confusion and error, and like the Energizer Bunny, he seems to keep “going, and going, and going…” Just in the past nine months or so, he has:

He also found time to greet Katy Perry in person (Apr. 2018) and receive U2’s Bono in private audience (Sept. 2018). And yet, he cannot manage to meet with Cardinals Burke and Brandmüller (both of whom reside in the Vatican) to discuss their dubia (“doubts”) concerning Amoris Laetitia, nor will he answer Archbishop Viganò’s testimony concerning his role in covering up the crimes of now-Mr. Theodore McCarrick.

This list is by no means exhaustive, but it suffices to demonstrate that even after six long years, the 82-year-old Pontiff isn’t showing signs of slowing down his relentless agenda—far from it, in fact, as the next exercise in “synodality” is already scheduled for October of this year. And, honestly, even if his disastrous pontificate were to end tomorrow, the prospects of getting a decent successor are, humanly speaking, abysmal. Earlier this week, for example, the well-known Italian journalist Antonio Socci tweeted that Cardinals Pietro Parolin and Luis Antonio Tagle are supposedly among the “favorites” for the next conclave—in other words, the Bilderberg Cardinal who orchestrated Francis’ Chinese Ostpolitik, or a Sesame Street-esque prelate, could very well be the next Pope. Six more weeks of winter, indeed!

As this pontificate—and the decades-long crisis it represents—continues to drag on and on, it’s important for us to reflect on (1) the spiritual meaning of our present circumstances and (2) how we can outlast this “long winter” with our faith and sanity intact, all the while hastening a true springtime for the Church.

St. John Eudes (1601-1680), a renowned French priest and founder of the Society of Jesus and Mary, offers some sobering words regarding our first reflection point in his book, The Priest: His Dignity and Obligations:

“The most evident mark of God’s anger and the most terrible castigation He can inflict upon the world are manifested when He permits His people to fall into the hands of clerics who are priests more in name than in deed, priests who practice the cruelty of ravening wolves rather than the charity and affection of devoted shepherds. Instead of nourishing those committed to their care, they rend and devour them brutally. Instead of leading their people to God, they drag Christian souls into hell in their train. Instead of being the salt of the earth and the light of the world, they are its innocuous poison and its murky darkness. …

When God permits such things, it is a very positive proof that He is thoroughly angry with His people, and is visiting His most dreadful anger upon them. That is why He cries unceasingly to Christians, ‘Return, O ye revolting children…And I will give you pastors according to My own Heart’ (Jer. 3:14-15). Thus, irregularities in the lives of priests [and surely popes, as well] constitute a scourge visited upon the people in consequence of sin.” (Chapter 11 – Qualities of a Holy Priest)

The truth sometimes hurts, but Lent is the perfect time to face the reality of sin and its devastating consequences. Now, this doesn’t mean that God positively wills the corruption which bad priests, bishops, and popes have wrought in His Church (He “permits” it, as St. John Eudes says); nor does it imply that the faithful are responsible for the individual sins and crimes of the clergy. What it does mean is that our personal striving for sanctity—or lack thereof—has a real effect, for better or worse, on the overall spiritual health of the Mystical Body of Christ. The best thing the average Catholic can do for the Church, then, is to take his own spiritual life seriously, strive for sanctity, and help others to do likewise, beginning in our own families (see here for further insights). In due time, this will produce the good “fruit of the Spirit” (Gal. 5:22) in our own hearts and lives, which in turn will contribute to “the edifying of the body of Christ…in charity” (Eph. 4:12, 16).

Repentance and conversion are the indispensable means for obtaining priests, bishops, and ultimately a Pope who will lead the Church in the narrow way of righteousness and truth: “Return, O ye revolting children…And I will give you pastors according to My own Heart, and they shall feed you with knowledge and doctrine” (Jer. 3:14-15). When enough Catholics finally understand this and get on board, then shall we see come to pass these consoling words of St. John Eudes:

“On the other hand, the greatest effect of God’s mercy, the most precious grace He bestows upon mankind, is to send worthy priests, men after His own Heart, seeking only His glory and the salvation of souls. The greatest blessing that God bestows upon a church, the most signal manifestation of divine grace, is to have a saintly shepherd, be he bishop or priest. This is indeed the grace of graces and the most priceless of all gifts for it includes within itself every other blessing and grace. What is a priest after God’s Heart? He is an inestimable treasure containing an immensity of good things.” (Ibid.)

Sacred Heart of Jesus, may Thy Kingdom come! Immaculate Heart of Mary, may thy triumph come!

UPDATE (3/16/2019): It’s now the third day since that nasty storm hit my hometown and already much of the ice and snow have melted away and blue skies have returned (gotta love Colorado weather!). This strikes me as another encouraging reminder that God can transform even the bleakest of circumstances very quickly—just like He did with the Resurrection of His Son, on “the third day” (1 Cor. 15:4).

PDF Button CFN Editor-in-Chief Brian McCall was happy to be one of the first guests on a new podcast channel, Civitatis Dei International (International City of God). McCall discusses Catholic teaching on usury and...

PDF Button Editor’s Note: Catholic Family News is pleased to help circulate the following open letter, which we reprint with permission from The Remnant (here). ***** Letter from the Faithful Attached to the...