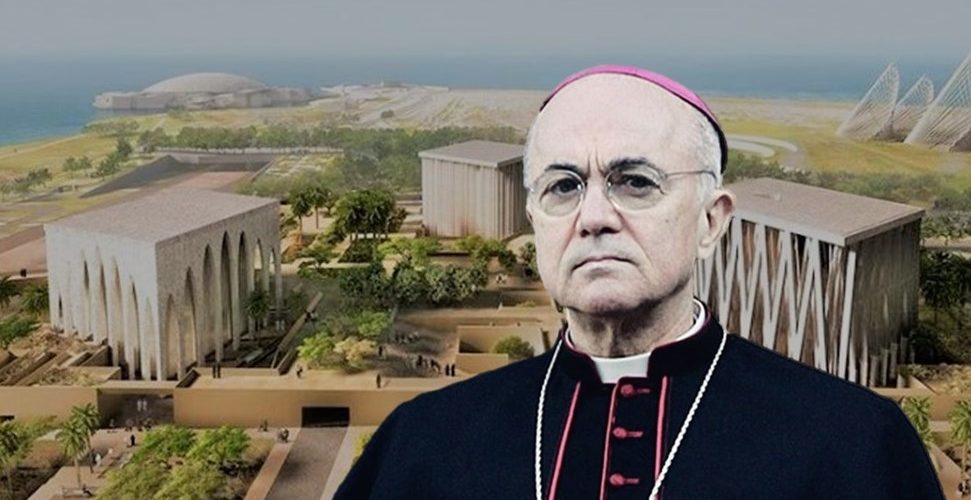 “In the garden of Abu Dhabi the temple of the world syncretistic Neo-Religion is about to rise with its anti-Christian dogmas. Not even the most hopeful of the Freemasons would have imagined so much!

Pope Bergoglio thus proceeds to further implement the apostasy of Abu Dhabi, the fruit of pantheistic and agnostic neo-modernism that tyrannizes the Roman Church, germinated by the conciliar document Nostra Aetate. We are compelled to recognize it: the poisoned fruits of the ‘Conciliar springtime’ are before the eyes of anyone who does not allow himself to be blinded by the dominant Lie.”

No, Archbishop Marcel Lefebvre (RIP) has not been resurrected, nor has the current Superior General of the Society of Saint Pius X (SSPX) issued a new statement.

This honest assessment of reality has been furnished by Archbishop Carlo Maria Viganò, who, less than 18 months ago, was simply a retired Vatican diplomat. His status radically changed, of course, following the release of his explosive testimony last August concerning former Cardinal (now Mr.) Theodore McCarrick and “the homosexual current” within the Church (members of the hierarchy) that covered up McCarrick’s sodomitical crimes for decades. This courageous step, which included indicting Pope Francis himself as complicit, catapulted our retired diplomat back into the fray and constituted a day of reckoning for many false shepherds.

Fast forward to the present and Archbishop Viganò has begun to take another courageous step, one that is arguably more daring and consequential (at least theologically) than his original testimony: He is openly challenging certain “profane novelties” (1 Tim. 6:20) of the Second Vatican Council and connecting the dots between those novelties (ecumenism and interreligious dialogue, in particular) and their logical end under Francis, as the above quote clearly demonstrates.

Regarding why our retired Vatican diplomat has chosen to take up the sword of his pen once again, Dr. Robert Moynihan of Inside the Vatican, who published an English translation of Archbishop Viganò’s essay (originally published here in Italian), explains:

“He [Viganò] has decided to write brief reflections on the issues of the day from the perspective of a faithful son of the Church. His desire is to explain and defend orthodox Church teaching because he is persuaded it is the way of salvation…. He feels called to offer these reflections, he says, because the power of secular thought today is so great that it is influencing many Church leaders, and ordinary faithful, creating confusion and opening the way to a loss of that faith which he, as a bishop, vowed to protect and defend.”

More specifically, Archbishop Viganò himself indicates that the catalyst for his new reflection was the recent meeting of Pope Francis with Dr. Ahmed Al-Tayeb, Grand Imam of Al-Azhar University and Mosque in Cairo, Egypt, who signed the infamous “Document on Human Fraternity” with the Pope in early February in Abu Dhabi, capital of the United Arab Emirates.

According to a Vatican press communiqué, Francis received the Grand Imam and several other Muslim officials, including some members of “the Higher Committee for achieving the goals contained in the Document on Human Fraternity for World Peace and Living Together [a committee first recognized by the Vatican here],” in private audience on November 15. During that meeting, “the members of the Committee introduced its most recent member to the Holy Father…and they presented to the Pope the project for the ‘House of Abraham’, inaugurated in New York in September.” Below is video footage of the unveiling of the so-called “Abrahamic Family House” project, as reported by Vatican News on September 21:

This new interreligious campus, set to be constructed in Abu Dhabi, is the primary focus of Archbishop Viganò’s resolute critique:

“The building of the House of the Abramitic Family seems to be a Babelic enterprise, concocted by the enemies of God, of the Catholic Church and of the only true religion capable of saving man and the whole creation from destruction, both now and in eternity, and definitively. The foundations of this ‘House,’ destined to give way and collapse, arise where, by the hands of the builders themselves, the One Cornerstone is about to be incredibly removed: Jesus Christ, Savior and Lord, on Whom is built the House of God. ‘Therefore,’ warns the Apostle Paul, ‘let everyone be careful how he builds. Indeed, no one can lay a foundation other than the one already found there, which is Jesus Christ’ (1 Cor 3:10).

In the garden of Abu Dhabi the temple of the world syncretistic Neo-Religion is about to rise with its anti-Christian dogmas. Not even the most hopeful of the Freemasons would have imagined so much!”

In September, readers may recall that I noted several then-recent bombshells from Archbishop Viganò as reported by Dr. Moynihan (based on lengthy conversations between the two men over the summer), including an implicit endorsement of Dr. Taylor Marshall’s book Infiltration and an admission about the Modernist hijacking of the Second Vatican Council. At that point, though, His Excellency was still apparently adhering to Benedict XVI’s “hermeneutic of continuity” concerning the Council documents – in other words, that the entire Council can be interpreted in a manner consistent with Tradition – telling Dr. Moynihan, “So what happened after Vatican II ended in 1965 was absolutely the opposite of a policy of continuity, which would have been the correct interpretation of the Vatican II documents. Instead, there was another interpretation, of discontinuity, promoted by all the huge machine of media propaganda.”

I closed my September article with an appeal for prayer, stating, “Let us pray for Archbishop Viganò, that he will continue to study Vatican II in light of Tradition and be given the grace not only to recognize the rupture that has occurred, but also to testify accordingly, even if he must do so alone.”

By the grace of God, it seems our prayers have been answered in magnificent detail vis-à-vis Archbishop Viganò’s new essay! Not only does he quote at length from Pope Pius XI’s 1928 encyclical Mortalium Animos (On True Religious Unity), thus demonstrating his ongoing study of perennial Church teaching, he also recognizes that a rupture has indeed occurred and testifies accordingly:

“Pius XI had alerted and warned us [in Mortalium Animos]. But the teachings that preceded Vatican II have been thrown to the winds, as intolerant and obsolete. The comparison between the pre-conciliar Magisterium and the new teachings of Nostra aetate [on interreligious dialogue] and Dignitatis humanae [on religious liberty] – to mention only those – manifest a terrible discontinuity, which must be acknowledged and which must be amended as soon as possible. Adjuvante Deo (‘with God’s help’).

Let us listen to the words of the Supreme Pontiff Pius XI, when the Popes used to speak the language of Truth, chiseled with fire in diamond. ‘For which reason conventions, meetings and addresses are frequently arranged by these persons, at which a large number of listeners are present, and at which all without distinction are invited to join in the discussion, both infidels of every kind, and Christians, even those who have unhappily fallen away from Christ or who with obstinacy and pertinacity deny His divine nature and mission. Certainly such attempts can nowise be approved by Catholics, founded as they are on that false opinion which considers all religions to be more or less good and praiseworthy, since they all in different ways manifest and signify that sense which is inborn in us all, and by which we are led to God and to the obedient acknowledgment of His rule. Not only are those who hold this opinion in error and deceived, but also in distorting the idea of true religion they reject it, and little by little, turn aside to naturalism and atheism, as it is called; from which it clearly follows that one who supports those who hold these theories and attempt to realize them, is altogether abandoning the divinely revealed religion.’ (Mortalium Animos, 2)”

Thankfully, for his sake and ours, Archbishop Viganò is not alone among the Catholic episcopate (not entirely, at least) in observing the clear discontinuity between what he calls “the new teachings” and “the pre-conciliar Magisterium”. Bishop Athanasius Schneider, an auxiliary of the Archdiocese of Saint Mary in Astana, Kazakhstan, devotes an entire chapter of his new book-length interview, Christus Vincit, to the subject of Vatican II, candidly stating, “An honest examination shows that in some expressions of the Council texts there is a rupture with the previous constant tradition of the Magisterium.”[1] And likewise:

“The application of the principle of the ‘hermeneutic of continuity’ cannot be used blindly in order to eliminate unquestioningly any evidence of existing problems. Indeed, such an approach would transmit artificially and unconvincingly the message that every word of the Second Vatican Council is infallible and in perfect doctrinal continuity with the previous magisterium. Such a method would violate reason, evidence, and honesty, and would not do honor to the Church, for sooner or later (maybe after a hundred years) the truth will be stated as it really is.”[2]

May God bless and protect Archbishop Viganò and Bishop Schneider for their courage in speaking the truth “as it really is” and raise up many more bishops who will do the same. Our Lady of Fatima, pray for us!