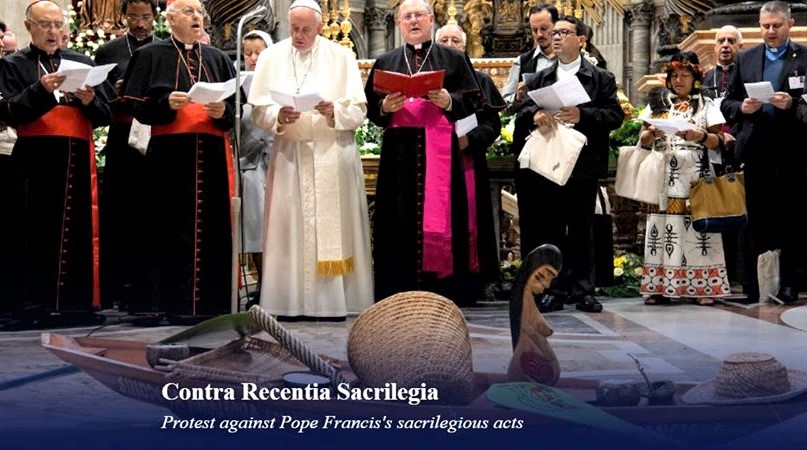 A Public Protest of Idolatry: Will It Rouse More Bishops from Modernist Slumber?

This week, a new Open Letter was released recently that calls upon Pope Francis “to repent publicly and unambiguously of … objectively grave sins and of all the public offences that he has committed against God and the true religion, and to make reparation for these offences.” I was an original signatory to the letter and was honored to have a small part in preparing the initial draft which, after a collegial discussion among the initial signatories, was finalized on November 9.

The letter identifies the sacrilegious acts of which the Pope must repent as follows:

The letter makes the important point that the way we think affects the way we act. The letter draws the clear connection between “the statement entitled ‘Document on Human Fraternity’, signed by Pope Francis and Ahmad Al-Tayyeb, the Grand Imam of Al-Azhar Mosque, on February 4, 2019” and Pope Francis’ “participation in idolatry” during the recent Synod on the Amazon. The letter points out that Francis has confirmed that he understands the “Human Fraternity” text to mean that God wants there to be different religions and that they all worship God:

In his subsequent audience address of April 3, 2019 Francis, answering the question[,] “Why does God permit that there are so many religions?”, referred in passing to the “permissive will of God” as explained by Scholastic theology, but gave the concept a positive meaning, declaring that “God wanted to permit this” because while “there are so many religions” they “always look to heaven, they look to God (emphasis added).”

Since he believes that all religions are the same and worship the same God, he clearly saw no problem with participation in worship of the idol Pachamama.

The letter goes on to explain that the rendering of worship to anyone other than God is always objectively idolatry and a violation of the First Commandment, quoting the following from St. Paul:

“What then? Do I say, that what is offered in sacrifice to idols, is any thing? Or, that the idol is any thing? But the things which the heathens sacrifice, they sacrifice to demons, and not to God. And I would not that you should be made partakers with demons. You cannot drink the chalice of the Lord, and the chalice of demons: you cannot be partakers of the table of the Lord, and of the table of demons.” (1 Cor. 10:19-21)

After calling upon the Pope to repent of these public violations of the First Commandment, the letter addresses the bishops of the world to live up to their duty as shepherds of souls: “We respectfully ask all the bishops of the Catholic Church to offer fraternal correction to Pope Francis for these scandals, and to warn their flocks that according to the divinely revealed teaching of the Catholic faith, they will risk eternal damnation if they follow his example of offending against the First Commandment.”

The letter was initially signed by approximately 100 clergy and lay scholars and authors. Some names that should be familiar to CFN readers include:  Prof. Roberto de Mattei, Christopher A. Ferrara, Dr. Peter A. Kwasniewski, Dr. John Lamont, Michael J. Matt, John Salza, Henry Sire, Robert J. Siscoe, and John-Henry Weston. Among the clergy I noticed the name of one priest of the Priestly Fraternity of St. Peter, Fr. Stefan Dreher, whom, together with all the clergy, I commend for taking a public stand to defend the honor of Almighty God.

Another ten clerical and lay signatories were added on November 12, beginning with Archbishop Carlo Maria Viganò. May His Excellency be the first of many more bishops and religious superiors who stand up publicly to defend the honor of Our Lord. What more proof than these objective and outrageous acts of pagan worship by the Supreme Pontiff, in the name of false ecumenism, will be necessary to wake the hierarchy from its Modernist slumber and rouse them to cast out the wicked viruses of error that were injected into the Mystical Body of Christ at the Second Vatican Council?

I think its date has symbolic significance. First, it is the feast of the Dedication of the Basilica of St. John Lateran. This church has been the cathedral of the Bishop of Rome for centuries. It is a symbol of Rome. The feast marks the dedication of this building to the worship of the true God, in contrast to the worship of false gods (such as occurred at the Amazon Synod). Secondly, November 9 is the day chosen by Fr. Davide Pagliarani, Superior General of the SSPX, as a day of fasting and penance in reparation for the idolatry and sacrilege of the Amazon Synod.

The Francis sycophants lost no time in attacking a letter that at any other time in Church history would have been incapable of criticism. Austen Ivereigh, author of The Great Reformer: Francis and the Making of a Radical Pope and chief English apologist for Francis told The Telegraph: “These traditionalists take every opportunity to criticise Francis. …They have a deliberate strategy to weaken Francis’s position in advance of the next conclave (the election of a new pope).”

As evidence of the complete loss of a supernatural spirit, Ivereigh can only see this action in terms of crude politics—not surprising, in a pontificate that sees itself as primarily political. Completely ignoring the affront rendered to Our Lord and Savior by His Vicar participating in objectively idolatrous acts on the very grounds of the Vatican, Ivereigh can only lament that this letter will “weaken” Francis’ ability to preserve the radical reforms he is instituted through as successor made in his image and likeness. Kyrie, eleison!

Readers can support the Open Letter by visiting its official website.