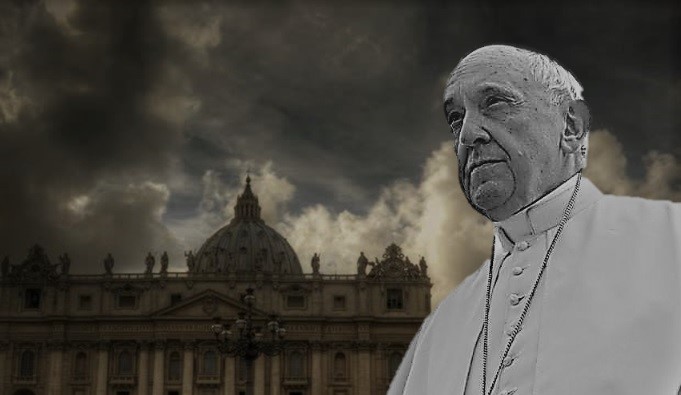 Francis Warns New Cardinals They Must Be Loyal to Him

On October 5, 2019, the day before the opening of the infamous Amazon Synod, Pope Francis made 13 new cardinals in a consistory. America Magazine bragged upon announcement of the new cardinals that they were made in Francis’ own “image.” In addition to further packing the Sacred College with radicals and modernists who will choose the next supreme pontiff, Francis took the opportunity to engage in his favorite pastime, attacking his critics.

As reported by The Tablet, Francis played the disloyalty card against the few prelates who have shown more loyalty to Christ and His doctrine then to the person of Francis and his novelties:

“The readiness of a cardinal to shed his own blood – as signified by the colour of your robes – is secure if it is rooted in this awareness of having been shown compassion and in the ability to show compassion in return. Otherwise, we cannot be loyal. … So many disloyal actions on the part of ecclesiastics are born of the lack of a sense of having been shown compassion, and by the habit of averting one’s gaze, the habit of indifference.”

The National Catholic Reporter quoted this further portion of the attack:

“Am I compassionate towards this or that brother or sister, that bishop, that priest? Or do I constantly tear them down by my attitude of condemnation, of indifference?”

Notice how Francis slyly distorts the significance of the red color worn by cardinals to suit his own ends. The red of the cardinals is meant to remind them (as he notes) of their need to be ready to shed their blood. Yet, Francis does not complete the full phrase. Cardinals are to be ready to shed their blood for the Faith, to defend the revealed truths handed on by Tradition.  Francis turns the witness of the color of martyrs away from that for which all martyrs have died into the anemic concept of “compassion.” It is anemic because he again does not clarify for whom they need compassion. Compassion (“to suffer with” in Latin) requires one to suffer with someone for a virtuous cause such as defending the Faith.

But Francis is not really concerned with “compassion.” We find his true meaning when he goes on to attack the “disloyal” cardinals, whom he blasts for not showing an awareness that they have been shown compassion. In other words, they better watch out because he has not fully unleashed his punishments upon them, so they better stop their “disloyal acts.”

Ironically, it is the few prelates who have had the courage to call the latest novelties, such as the Document on Human Fraternity (signed Feb. 4) and the Instrumentum Laboris for the Amazon Synod (released June 17), what they are—departures from the Catholic Faith—who are the ones not “averting their gaze.” They are the few prelates who even if at the eleventh hour are breaking out of the “habit of indifference” to novelty and heresy that has pervaded the hierarchy for the past five decades. They have been demonstrating their true loyalty to Christ by obeying God rather than men (cf. Acts 5:29).

Yet, Francis’ entire papacy has not been about God or Christ and His Church but about the one thing most important to Francis: himself. It has been about personal loyalty to the man Jorge Bergoglio and loyalty to his remaking of the Church in his own image. The Tablet quickly drew the intended conclusion that these condemnations of “disloyalty” were aimed squarely at the prelates who have with more intensity in recent weeks sounded the alarm against the most recent outrages:

“Throughout his papacy, Francis has faced criticism from a small but powerful grow of conservatives in the Church, which have supporters in parts of the Roman Curia. Cardinal Burke and another retired cardinal have submitted a series of challenges to him about his family life teaching and threatened to issue a formal correction.”

Francis has eliminated the clear distinction maintained in the oath of fidelity for new cardinals, who swear to be “constantly obedient to the Holy Roman Apostolic Church, to Blessed Peter in the person of the Supreme Pontiff, …” Notice that the first call of loyalty is to the Holy Roman Apostolic Church and not to Jorge Bergoglio. Also, the second level of obedience is not to Francis or his personal whims. It is only to the pope to the extent that Blessed Peter is acting in and through his person. This distinction is important. A cardinal’s loyalty is to the Church and her Tradition dating back to Blessed Peter and not to the person of Jorge Bergoglio (or any other who sits on Peter’s throne). The loyalty demanded must be ordered to its end, the defense of the Church’s Tradition.

That is why St. Thomas Aquinas reminds us that when a ruler orders us to violate the divine law, we must disobey so as to obey the higher law (see Summa Theologiae I-II, Q. 96, Art. 4). Unfortunately, such true obedience is not the sort of loyalty that Francis demands. He, like all dictators, demands personal loyalty to himself, that is, to the person holding the office in all that person does. Such servile loyalty is not a virtue but rather a vice.

Obedience is a moral virtue which by its nature is subject to the theological virtues, including Faith. We obey the pastors of the Church so that we may keep the Faith. If obeying the pope means we must act against the Faith, the Faith must take precedence. Francis would likely dismiss such ancient moral reasoning as “rigid” and “scholastic” since his stated goal is to crush all opposition to his personal remaking of the Church. Cardinals Burke,
Brandmüller, and Müller, Archbishop Viganò, and Bishop Schneider should likely brace themselves for more attacks from the Dictator Pope.