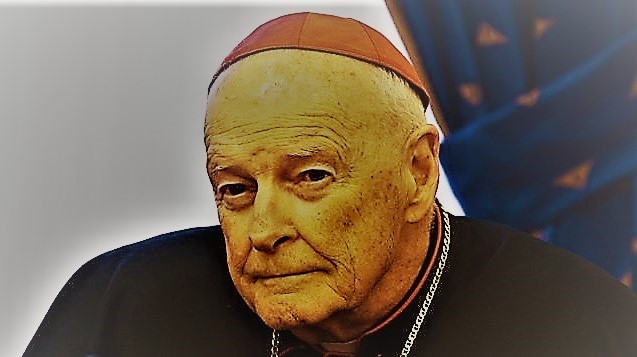 Neumayr on McCarrick’s New Interview: “Despicable to the End”

Editor’s Note: Earlier this week, disgraced ex-Cardinal Theodore McCarrick gave his first public interview since being removed from ministry last June and subsequently dismissed from the clerical state earlier this year after being found guilty of several “delicts” (ecclesiastical crimes), including “sins against the Sixth Commandment with minors and with adults,” by the Vatican’s Congregation for the Doctrine of the Faith (CDF). Inexplicably, Mr. McCarrick continues to deny any guilt on his part, asserting instead in the new interview, “I’m not as bad as they paint me,” and, “I do not believe that I did the things that they accused me of.”

In response to this unbelievable denial, George Neumayr – investigative journalist extraordinaire and author The Political Pope – penned an article for The American Spectator, which Catholic Family News is pleased to reprint (below) with permission. Neumayr, as readers will recall, is the journalist who relentlessly pursued Cardinal Donald Wuerl last fall after Archbishop Viganò’s explosive testimony was first published – even locating the house in Washington, D.C. where Wuerl was essentially hiding McCarrick from public scrutiny prior to McCarrick’s transfer to Kansas. Neumayr also recently wrote an article for CFN, which is featured on the front page of this month’s print edition.

Once again, CFN encourages readers to support Neumayr’s stalwart efforts to doggedly track down the details on corruption within the Church and hold those in authority accountable.

Theodore McCarrick: Despicable to the End

It is telling that the only interview Theodore McCarrick has given in over a year is to Slate, a liberal publication in the tank for the gay mafia. The article appeared this week. It is a half-baked piece, full of distortions, lazy bias, and a lack of outrage about McCarrick’s sickeningly dishonest denials.

Slate informs us that the conniving Catholic right saw in McCarrick’s downfall a chance to “cleanse” the Church. Imagine that! What manipulative bastards! Slate also implies that conservative Catholics are exaggerating the threat posed to young people without bothering to report that he is staying at a friary next to a basilica considered one of Kansas’s top tourist destinations — a basilica-friary complex, I’ve been told by a Church insider, that hosts youth retreats.

Slate confidently states that McCarrick had no connection to the Kansas location. But in fact he had been chummy with the corrupt Capuchins who have run the friary for years, and I’ve been told that he knew a prominent family in town whose son had been in the Incarnate Word, an order (founded by a gay predator) with which McCarrick had a special relationship. He lived near the order in Washington, D.C., for a time. He was famous for dragging Incarnate Word seminarians with him to Atlantic City casinos. He also could be high-handed with the order’s staff, demanding special treatment. According to Slate, that trait hasn’t worn off in Kansas. He is still a jerk to kitchen staff, expressing impatience when he feels his meals don’t arrive quickly enough.

Naturally, the Church hierarchy still hasn’t kicked McCarrick to the curb, even though he has been laicized for months. The Capuchins even pay for his room and board and let him continue to play “brother” McCarrick. He pads around in loafers. It sounds like the Capuchins pay “Ted” court.

One Capuchin official justifies the outrageous arrangement to theSlate reporter on the grounds that Catholic religious must show “mercy” to the repentant. But McCarrick has shown zero repentance. In the interview he granted to Slate, he admits nothing, portrays himself as the victim of a smear, denies treating the confessional as a dating booth, and dismisses Archbishop Viganò as a representative of the “far right.” I had to laugh at that last sophistical gibe, designed by McCarrick to flatter the liberal biases of his interviewer. In liberal-world, as McCarrick understands, even a rapist can sit in judgment of an odious right-winger. The old reptile also trots out a Clintonian defense of sorts, implying he deserves credit for all the seminarians he didn’t molest. (Clinton wanted credit for all the interns he didn’t court.)

A slimeball to the end, a deceiving, unrepentant McCarrick continues to go to confession, apparently convinced that he can snooker God as easily as he duped the faithful. While Slate notes McCarrick’s BS, its reporter does little to push back against it. To quote Bob Dole, where is the outrage?

Contrary to Slate’s ludicrous narrative — it falsely credits the big media with driving McCarrick to Kansas — reporters showed little to no interest in holding McCarrick accountable. Slate quotes Vaticanista John Allen to the effect that Donald Wuerl couldn’t risk a media scrum outside of McCarrick’s D.C. hideout. There was no such risk. I know; I tried to form one the night I broke the story detailing the street address and location of McCarrick’s safe house. I called up Michelle Boorstein at the Washington Post and urged her or colleagues to join me outside the house. She blew me off, saying a media scrum wouldn’t matter. I asked her to confirm my story. Again, she declined, even though the Post knew my story to be true.

It was The American Spectator, not the Post, that drove McCarrick out of D.C. After I reported his whereabouts, Cardinal Wuerl had a security guard placed in front of his house 24/7, a costly and unsustainable arrangement. Meanwhile, his supposed babysitter, the rattled auxiliary bishop Mario Dorsonville, was so anxious he broke out in a horrible skin condition, an archdiocesan source told me. It was during this fright that Wuerl scrambled to find a new home for McCarrick.

I will give Slate credit for one illuminating detail. It says that the official who joined McCarrick on his trip to Kansas was none other than Monsignor Charles Antonicelli, Wuerl’s two-faced fixer and now Archbishop Wilton Gregory’s right-hand man.