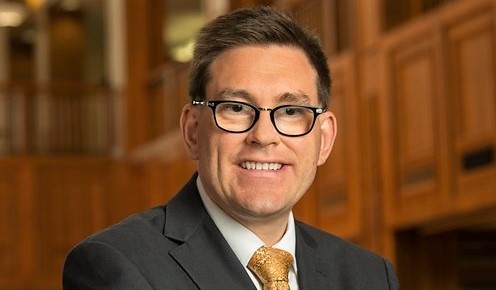 Editor’s Note: The following press release, issued by the American Catholic Lawyers Association late last week, announces that CFN Editor-in-Chief Brian McCall, a tenured professor of law, and the University of Oklahoma have “reached an amicable resolution of all claims relating to the end of his service as Associate Dean” of the university’s College of Law “and Associate Director of the Law Center in October 2018 pursuant to a confidential settlement agreement.”

Readers may recall that last October, Dr. McCall faced an unfortunate incident of professional persecution, including the loss of his associate deanship, sparked by two defamatory articles published against him in the university newspaper, The OU Daily.

CFN celebrates the newly reached settlement and hopes that Dr. McCall will be able to continue his outstanding work at the University of Oklahoma and Catholic Family News for many years to come. Please keep him, his family, and CFN in your prayers!

McCall said, “I am relieved finally to put this unfortunate incident behind me and to be free to dedicate my full time and effort to serving the students of the University of Oklahoma who are the entire reason for the University’s existence. I want to express my deepest gratitude to the American Catholic Lawyers Association (ACLA) for expert and sound legal advice. In particular, I wish to thank ACLA’s Oklahoma Affiliate, Brecken Wagner, and the entire ACLA team for their assistance over this past year, including President and Chief Counsel, Christopher A. Ferrara, and ACLA’s Western Regional Litigation Counsel, James Bendell.”

McCall is a tenured professor holding an endowed professorship and teaches courses in Contracts and Commercial Law with a specialization in teaching law in an experiential manner that emphasizes the acquisition of practical professional skills.

As a law professor, he was instrumental in developing the College of Law’s online Master of Legal Studies and online Master of Laws degrees which under his leadership grew from fewer than a dozen students to over 350 enrolled students. He has been and remains a passionate advocate for practical experiential education that facilitates the development of professional skills and emphasizes the ethical practice of law. He is a traditional Roman Catholic who has been married to his wife, Marie Elaina, for 28 years and is the proud father of six children.