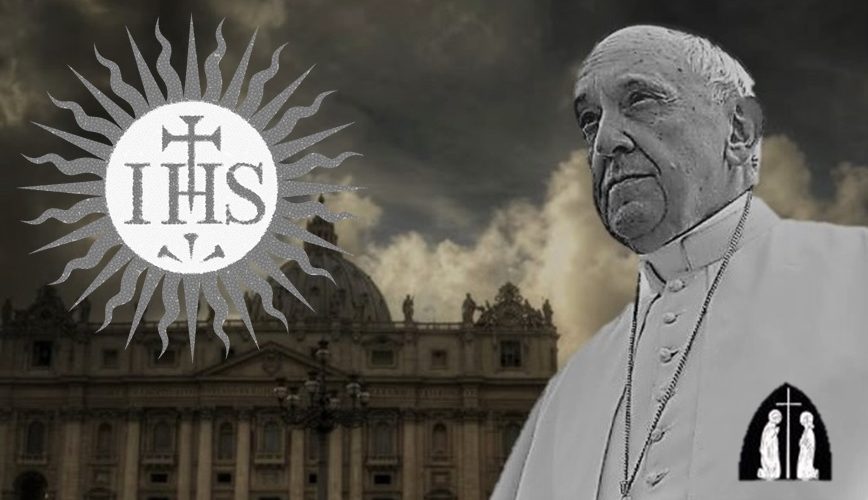 The Papacy in Jesuitical Captivity: Archbishop Viganò and the “60-Year-Old Plan”

Editor’s Introduction: One year ago today (Aug. 25, 2018), Archbishop Carlo Maria Viganò, former apostolic nuncio to the United States (2011-2016), made history by publishing his explosive testimony concerning ex-Cardinal Theodore McCarrick’s decades of homosexual predation and abuse, indicting over a dozen high-ranking prelates – including Pope Francis himself – as being guilty of covering up McCarrick’s notorious sexual deviancy. Archbishop Viganò referred to such prelates in his 11-page testimony as belonging to “the homosexual current in favor of subverting Catholic doctrine on homosexuality,” describing “[t]hese homosexual networks” as analogous to “octopus tentacles” that “are strangling the entire Church.”

Since that day of reckoning one year ago, few journalists have worked with greater intensity and determination to dig for answers and hold “the homosexual current” accountable than George Neumayr, a contributing editor to The American Spectator and author of the 2017 blockbuster book, The Political Pope. Over the past 12 months, George has been relentless in his pursuit of uncovering the whole story behind Theodore McCarrick and one of McCarrick’s primary enablers, Cardinal Donald Wuerl (see here and here). And as we speak, George is currently in Buenos Aires, Argentina conducting further research into the personal history and ecclesial legacy of Jorge Mario Bergoglio, aka Pope Francis, the subject of his 2017 book.

Much to Neumayr’s credit, Archbishop Viganò personally corroborated his investigative work on Monsignor Walter R. Rossi, longtime rector of the Basilica of the National Shrine of the Immaculate Conception in Washington, D.C., whom Neumayr describes as “the Gay Mafioso whom pederast Cardinal Theodore McCarrick appointed to run the Basilica…in 2005,” and whom McCarrick’s successor, Cardinal Wuerl, was pleased to keep in that prestigious position (although we hope Rossi’s days are numbered).

Considering the overlap between Neumayr’s investigative work and Archbishop Viganò’s powerful insights, one of my first thoughts after reading Viganò’s recent comments to Robert Moynihan of Inside the Vatican magazine – comments concerning “the triumph of a 60-year-old [Jesuit] plan” of subversion within “the heart of the Church” – was, I need to contact George and see if he’ll write something about this for CFN. George graciously agreed to my proposal and wrote the following article, which is featured on the front page of the forthcoming September issue (subscribe HERE).

I encourage all readers to consider donating to George’s journalism fund in order to help keep his vital investigative work going. And further, please check out his book, The Political Pope, which corroborates and discusses in detail the “60-year-old [Jesuit] plan” of subversion that has come to fruition under Pope Francis. – Matt Gaspers, CFN Managing Editor

Jorge Bergoglio is the first Jesuit to become pope in the history of the Church, a grimly ironic distinction given the moral and theological collapse of the order at the moment of his election. At its lowest point, the Jesuit order produced its first pope, which foreshadowed his disastrous pontificate. In light of his catastrophic papacy, the first Jesuit pope may also end up the last one.

One of the themes of my book, The Political Pope, is that the papal program of Jorge Bergoglio comes straight out of the modernist playbook of the modern Jesuit order. We are witnessing the liberal Jesuit captivity of the papacy.

Hence, I wasn’t surprised by Archbishop Carlo Maria Viganò’s recent remark that the Bergoglio pontificate represents the culmination of a decades-long plot of the modern Jesuits to liberalize the Church. Viganò is right: Francis seeks not to reform the Church but to destroy it in conformity with the modernist ambitions of his liberal Jesuit confreres.

Bergoglio, after all, had entered the Jesuit order around the time of the revolutionary ferment of the “spirit” of Vatican II precisely because he wanted to push liberal revolution in the Church. A left-wing political activist who had been mentored by a Paraguayan Communist, Esther Ballestrino (his boss at a laboratory in Buenos Aires), Bergoglio naturally gravitated to the Jesuits as they abandoned orthodoxy for “social justice” (which just meant the promotion of socialism) and trendy psychobabble. It shouldn’t surprise anyone that the signature phrases of this pontificate – “Who am I to judge?” and “Inequality is the root of all evil” – come from a Latin American Jesuit tutored in the liberalism of the 1960s.

Pope Francis has laughingly described himself as “undisciplined,” implying that that made him an odd fit for an order founded by the militaristic St. Ignatius of Loyola. But in the 1960s, it was that lack of discipline that made him a perfect fit. The Jesuits were busy turning their back on St. Ignatius and all of his “reactionary hang-ups” and “rigidity.” Ignatius’s Spiritual Exercises had been replaced by the works of Freud and Carl Rogers. Vatican II-era Jesuits were infamous for inviting destructive psychologists like Rogers to hold seminars for them on “non-directive therapy” (a one-time Carl Rogers acolyte, William Coulson, once said to me that the purpose of those sessions was to make the priests “feel good about being bad”).

Fr. Pedro Arrupe, the enormously permissive leader of the Jesuits as it embraced socialism and relativistic morality in the 1960s and 1970s, saw Bergoglio as a rising modernist star within the order and elevated him to the top Jesuit position in Argentina at the mere age of 36. The relationship between Arrupe and Bergoglio deserves closer examination (naturally, Bergoglio is pushing for the canonization of Arrupe). For one thing, Arrupe used Bergoglio as one of his liberal enforcers against restless conservative Jesuits, which is a very important biographical detail. At a worldwide gathering of Jesuits in the early 1970s, at which Arrupe blessed the liberal trajectory of the order, he asked Bergoglio to run off some Spanish Jesuits who had petitioned the Vatican for relief from Arrupe’s modernist dictates. Bergoglio complied.

If the future casts its shadow backwards, as Malcolm Muggeridge liked to say, one catches a glimpse of it in these biographical details. Bergoglio was in on the ground floor of the revolution in the Church and bided his time until he reached the papacy.

Anyone who doubts this should look at all the plums he has tossed to fellow modernist revolutionaries once he was safely ensconced in the papacy. “I was never a right-winger,” he tellingly put it in an interview with Jesuit editors—the same interview, you will recall, in which he pronounced the Church too “obsessed” with abortion and “gay” marriage.

The Jesuit Fr. Antonio Spadaro, one of Pope Francis’s closest advisers, conducted that interview. Spadaro is openly heretical, saying famously that under the caring-and-sharing pontificate of Francis two plus two no longer equals four. Translation: the new orthodoxy is heterodoxy, just as the modern Jesuits like it.

Not a month passes without some awful announcement about this or that flaky Jesuit receiving a promotion under Pope Francis. Take the Venezuelan communist and relativist he installed as the head of the Jesuit order, Fr. Arturo Sosa. Or take the Jesuit pro-LGBT propagandist Fr. James Martin, who has published a book that deliberately subverts the Church’s teaching on homosexual behavior. Pope Francis turned Martin into a “consultor to the Vatican’s Secretariat for Communications.” Martin brings some impressive credentials to the position—he once served as chaplain to the “Colbert Report” on Comedy Central.

Gibbonian historians will look back upon this sorry chapter in the decline and fall of the Church and note the perversity of the cardinals selecting a Jesuit pope at the very instant the order was disintegrating. One can only laugh at Pope Francis’s scolding of “small-minded” restorationists and traditionalists for a lack of “pastoral” effectiveness given his own order’s moribund condition. What exactly would Francis and his fellow Jesuits know about protecting flocks and saving souls? Oh-so-pastoral Pope Francis, heal thyself! At his Jesuitical “field hospital,” most of the patients appear to be dying. Just look at all the graduates of Jesuit colleges and universities who support abortion and “gay marriage”.

While the Jesuit order continues to peter out, traditionalist orders flourish. The only seminaries producing shepherds for the flock – isn’t that the purpose of “pastoral” activity? – are traditional ones. The Jesuit seminaries either look like ghost towns or “gay” bars.

“Let’s consider the history of the Jesuits,” Viganò said to the journalist Robert Moynihan. “That is something I am studying now with great care. In fact, if you would like to know the synthesis of my thought, it is this: What we are now seeing is the triumph of a 60-year-old plan, the successful execution of a well-thought out plan to bring a new sort of thinking into the heart of the Church, a thinking rooted in elements of Liberation Theology containing strands of Marxism, little interested in traditional Catholic liturgy or morality or theology, but rather focused on ‘praxis’ in the field of social justice. And now this plan has achieved one of its supreme goals, with a Jesuit on the See of Peter.”

History will judge Viganò correct. Were St. Ignatius of Loyola, the founder of the order, alive today, we know one thing for certain: this modernist Jesuit pope wouldn’t ordain him.

Want more great Catholic content? SUBSCRIBE to Catholic Family News and help support our work! DONATIONS are also accepted and greatly appreciated. God bless you and thanks for reading! 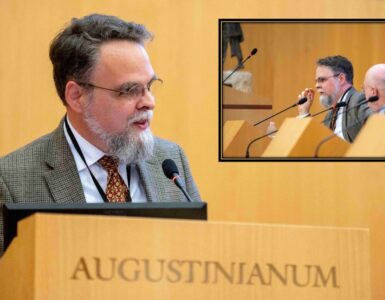 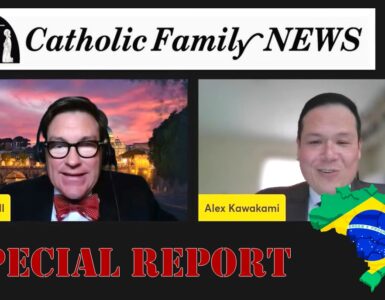