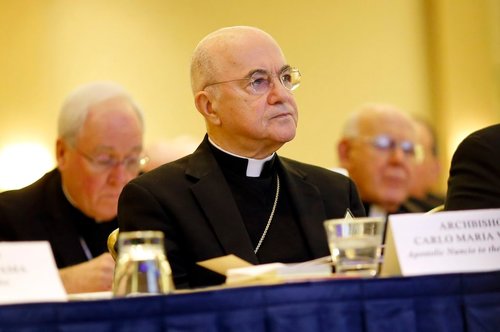 A Voice Crying in the Wilderness: Archbishop Viganò Gives Interview to Washington Post

On June 10, 2019, the Washington Post published excerptsfrom an extensive written interview of Archbishop Carlo Maria Viganò. Writing over 8,000 words in response to nearly 40 questions, the former apostolic nuncio again accused the Holy Father of lying about having no knowledge of former Cardinal Theodore McCarrick’s misdeeds, saying “it is immensely sad” that the pope was “blatantly lying to the whole world to cover up his wicked deeds.” You can read the entire Viganò’s exchange with The Washington Postonline.

According to the Washington Post article that was based upon the lengthy exchange:

The pope said he knew “nothing, obviously nothing” about the misconduct of then-Cardinal Theodore McCarrick and could not remember whether Viganò had warned him about McCarrick in 2013. Viganò said he told Francis that McCarrick had “corrupted generations of seminarians and priests.” “How could anybody, especially a pope, forget this?” Viganò wrote to The Post.

The Archbishop refused to answer questions about his location or personal safety, writing “n/a” in response to those questions. He indicated he is more concerned with his last judgement than his current situation. Viganò told the Post he is an “old man” who “will be appearing in front of the Good Judge before too long.” Yet, it is quite telling about the methods of this pope when dealing with criticism that Viganò felt the need to disconnect his phone and go into hiding.

Although he believes Pope Francis has lied and continues to lie to cover up other cases of homosexual abuse, the Post article continues:

Viganò said the “truth will eventually come out” for Francis, as it had for Cardinal Donald Wuerl, a former archbishop of Washington who portrayed himself last summer as being unaware about complaints against McCarrick — a claim that documents subsequently proved false. Viganò suggested to The Post that Francis is covering up other cases, “as he did for McCarrick.”

Viganò was highly critical of the summit Pope Francis held in February to supposedly address the abuse crisis. He rightly points out that no real reform will occur until the underlying problem is named and addressed:

Viganò also spoke in detail about one of his most contentious beliefs: that the sexual abuse crisis would be “far less severe” if the “problem of homosexuality in the priesthood were honestly acknowledged and properly addressed.”

“Given the overwhelming evidence, it is mind-boggling that the word ‘homosexuality’ has not appeared once, in any of the recent official documents of the Holy See” on events dealing with abuse and youth, Viganò wrote.

He said a “gay mafia” among bishops, intent on protecting themselves, was “sabotaging all efforts at reform.”

Although he admits a real and transparent investigation of this crisis would be disastrous for Pope Francis, he acknowledges that John Paul II and Benedict XVI would be implicated as well. He admits: “Benedict XVI and John Paul II are human beings, and may well have made mistakes. If they did, we want to know about them. Why should they remain hidden? We can all learn from our mistakes.” Yet, I wonder if His Excellency would admit that such revelations would expose the fraud of the current system of churning out so-called canonizations since one of those popes, John Paul II, has been declared a saint by the novel and uncertain process. Nevertheless, his admission that the truth would be embarrassing for these supposedly more conservative popes does refute the liberal claim that he is merely speaking out to harm the radically liberal Francis. Viganò has certainly been a member of the Benedict XVI conservative-leaning faction. Yet, as even his own testimony demonstrates, the crisis runs much deeper than Francis. The Vatican II popes have no solution for it as long as they cling to the Council. Hopefully Archbishop Viganò will come to see this truth as clearly as the others about which he has spoken publicly before he meets his Judge.

Photograph credit: Viganò, the Vatican’s then-ambassador to the United States, listens to remarks at the U.S. Conference of Catholic Bishops’ annual meeting in 2015. (Patrick Semansky/Associated Press)

Christ is Risen! His Body, the Church, Will Also Rise!

April 2021 Edition Now Available – Preview HERE April 4, 2021Easter Sunday Dear Friends in Christ, Christ is risen! Indeed, He is risen! This traditional Easter greeting reminds us that the glorious Resurrection of Our...

(Image: The Resurrection of Christ by Nicolas Bertin, c. 1710) “And in the end of the sabbath, when it began to dawn towards the first day of the week, came Mary Magdalen and the other Mary, to see the sepulchre. And...