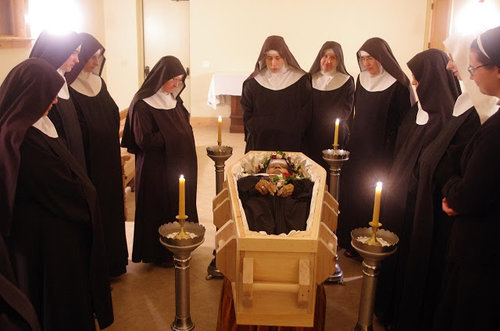 A Wise Virgin Meets the Bridegroom

The holy death of Sister Wilhelmina, OSB was announced this week by the Benedictines of Mary of Gower, Missouri. I have known Sister for almost 20 years. She lived an extraordinary life. She witnessed the bloodiest century in history, literally in the world and figuratively in the Church. After she entered religious vows 75 years ago, the revolution of Vatican II ravaged the Church. After many years of loneliness and struggle to maintain her religious life, she eventually ended up with a fledgling new order of Benedictines. During decades when thousands of women religious abandoned their habits and their vows, Sister Wilhelmina persevered. It is funny how life can come full circle. After many years with this community, they eventually relocated from Pennsylvania to Missouri, not far from Sister’s roots. I witnessed once, when visiting the Sisters, a moving reunion of Sister with one of her family members whom she had not seen in years.

The account below is an inspiring story of a holy life and death. It was an honor to have known such a lovely, loving, joyful, and peaceful bride of Christ. Eternal rest grant unto her O Lord.

Mother Abbess and the Sisters humbly request your prayers for the soul of our beloved Sister Mary Wilhelmina of the Most Holy Rosary, OSB (née Mary Elizabeth Lancaster) who passed away peacefully at 8:35 PM on Wednesday, May 29th, 2019 having been strengthened by the Last Sacraments and the entire community surrounding her in prayer. It seems Our Lord could not have granted a more consoling departure from the community, who loved her so dearly.

Sister became unresponsive on Saturday morning. Nevertheless, several times she joined in as best she could while the Sisters sang Marian hymns and prayed the Rosary between Sunday and Wednesday. She also briefly smiled at the Sisters gathered around her.

On May 29th, the feast of the Ascension having begun with First Vespers, the whole community assembled at 7:00 PM in Sister’s cell while Mother Abbess read to Sister Wilhelmina and all of us the various notes of assurance of prayers, along with prayer requests from family and friends. At this time Sister was not actively conscious, though it cannot be doubted that she indeed was taking all to heart. After singing some more of her favorite Marian hymns, the community chanted Compline in her cell. As Mother Abbess was giving the traditional sprinkling of holy water to the community, peacefully and without a struggle, Sister Wilhelmina breathed forth her last breath immediately after Mother Abbess blessed her with holy water, as the Sisters finished the antiphon Vidi aquam.

Sister Wilhelmina once was asked who was her favorite Benedictine saint, she replied, “St. Bede the Venerable, of course! I became a Benedictine on his feast, you know.” 1,300 years ago on this very feast, St. Bede the Venerable also expired peacefully as the evening Offices were being completed. Though it was Rogation Wednesday, according to Liturgical accounting he is said to have died on the Ascension, since First Vespers of this feast had been chanted, and it was an hour after sunset. Following not only in her beloved saint’s footsteps in the love of the Divine Office and our Blessed Lady, our dear Sister Wilhelmina followed him even in the manner of death.

Sister’s final words were “O Maria” on Tuesday afternoon, as the Sisters sang one of her favorite hymns: “Hail Holy Queen Enthroned Above.”

Sister Wilhelmina has long been the treasure of the community, both by right as our first Prioress and through her exemplary conduct as a Bride of Christ. We are deeply saddened at the loss of her beautiful example. Sister Wilhelmina recently celebrated her 75th anniversary of vows and her 95th birthday, so we remain deeply grateful to God for her persevering fidelity and faithful service.

Many years ago, our first chaplain asked Sister Wilhelmina, “Why did you become a religious?” Her instantaneous reply was: “because I was in love with Our Lord.” It could be easily said even in her declining years that she never fell out of love with Him. Let us unite in loving prayers that the love she bore for her Divine Bridegroom likewise bears her directly to His embrace.

All are invited to pay prayerful respects at the wake, which will begin immediately in the Chapter House at the Abbey until the Funeral Mass. Traditionally, a silent wake is kept so that the community may take turns praying the Psalms, so we do ask that all talking cease upon entry into Chapter House on the southeast side of the church. The Funeral Mass (Requiem) will be offered in the Abbey church at 11:00 AM on Friday, May 31st. Sr. Wilhelmina will be buried at the Abbey cemetery immediately following Mass. All are welcome to the reception to follow in the basement of the Abbey Church.

Thank you for your many prayers for the soul of dear Sr. Wilhelmina, and for our entire community. May God bless and reward you all.

Benedictines of Mary, Queen of Apostles 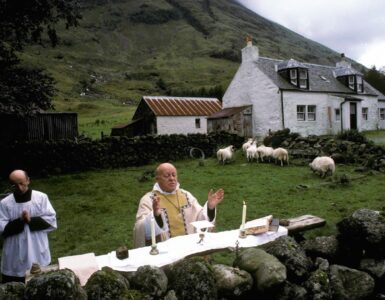 Abp. Viganò: Meditation for the Season of Advent