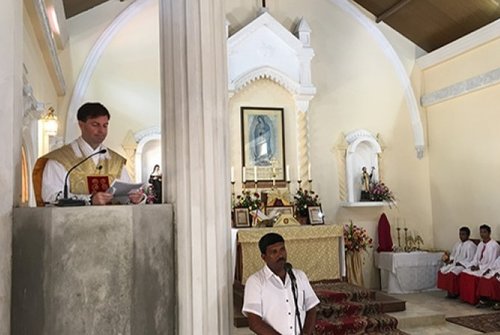 It is now going on one week since the deadly Easter Sunday attacks in three cities across Sri Lanka, an island nation located off the southeastern coast of India. Two Catholic churches — St. Sebastian’s in Negombo and St. Anthony’s Shrine in Colombo, the nation’s capital — were among the sites targeted by suicide bombers. Cardinal Malcom Ranjith, Archbishop of Colombo, promptly issued a strong public statement condemning the attacks and calling upon the government to pursue “a very impartial, strong inquiry and find out who is responsible behind this act, and also to punish them, mercilessly, because only animals can behave like that.”

Earlier this week, the Islamic State (aka ISIS) claimed responsibility for the highly coordinated attacks which have claimed the lives of around 250 people (according to the latest death toll), many of whom were Catholics attending Easter Mass. This confirms what Cardinal Robert Sarah and many others immediately suspected, namely, that the bombings were acts of Islamic jihad designed to target Christians — not “Easter worshippers”, as Hillary Clinton and Barack Obama referred to the victims on Twitter. 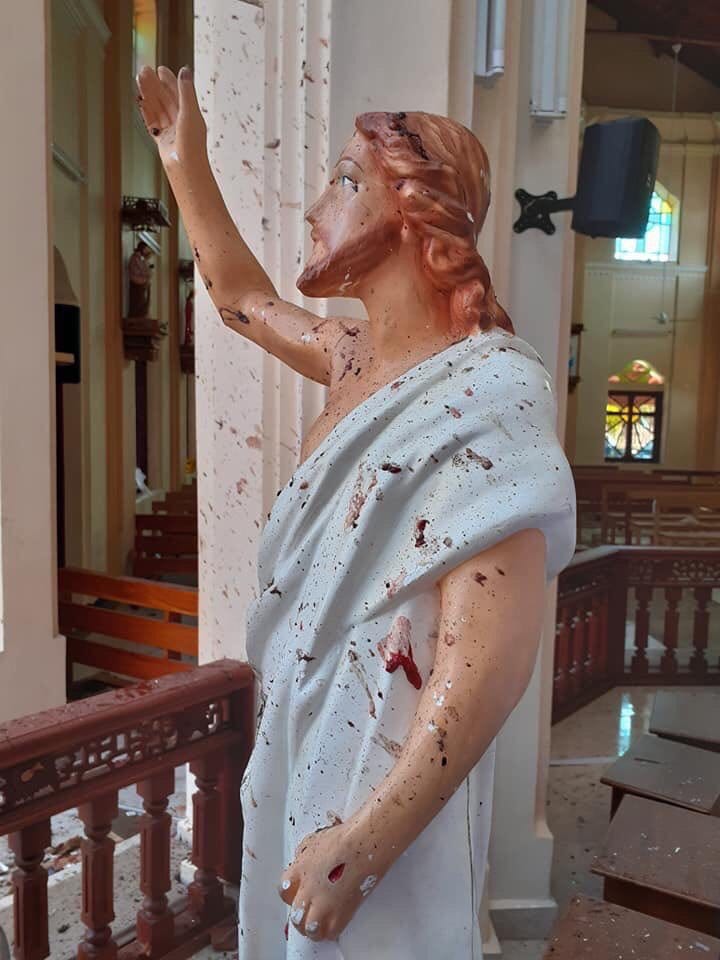 This statue of Our Lord, located in St. Sebastian’s Church in Negombo, Sri Lanka, is stained with the blood of Catholic victims murdered during Easter Mass (Apr. 21, 2019).

It may surprise readers to learn that the Society of St. Pius X (SSPX) has a presence in Sri Lanka. St. Francis Xavier Priory and Our Lady of Guadalupe Church are both located in Negombo, the same city as St. Sebastian’s, one of the churches that was hit. After receiving several inquiries regarding the safety of SSPX priests and faithful following the bombings, Fr. Fabrice Loschi, the former prior of St. Francis Xavier and Our Lady of Guadalupe, provided a brief reply that was published by the Society’s online news outlet, FSSPX.news, on April 24. Here follows the full text of Fr. Loschi’s comments (reprinted with permission).

What is happening in Sri Lanka?

Many of you have expressed their concern and offered their prayers for our welfare following the bombings of churches on Easter morning. I would like to thank you sincerely for your solicitude and give you an update on the situation here. On hearing of the bombings of two Catholic churches (a Protestant was hit too) on the day when we celebrate the Resurrection of Our Lord, the Catholic community was in a state of shock, and more so as the attack was entirely unexpected. [NB: Sri Lankan security officials were in fact advised by police of threats against Catholic churches and that attacks could be imminent. — CFN Ed.]

In Sri Lanka, although the country is predominantly Buddhist, the Church is an esteemed institution well regarded by the highest public authorities. The Catholic Church is appreciated for the excellence of her schools, her hospitals and all her other charitable institutions. On the Srilankan territory, the Catholic Church is divided in 12 dioceses with approximately 1.2 million Catholics representing around 6.1% of the total population according to the 2012 census. The Catholic Church enjoys freedom of worship and steadily grows[,] making converts, opening new parishes, building churches, [and] opening new schools and religious houses every year.

For a priest, Sri Lanka is one of the best places in the world. The priory of the Society of Saint Pius X is situated in Negombo town[,] one of the most Catholic areas in the country[,] and this allows the clergy of our Society to feel something unique: to experience what it is to live in a Catholic society, a privilege that has almost disappeared from the face of the earth in our day and age.

While driving along the Western coastline from Colombo (the capital city) to the city of Chilaw, one can see holy shrines or statues of saints nearly at every corner of a street. Negombo is very famous for that; there is even a three-meter-high statue of Christ the King right in the Town Hall compound to show that Negombo is a Catholic town. Two years ago, they inaugurated a statue of Our Lady at the top of the main clock tower right in the town center with electronic display welcoming the visitors to Little Rome, Negombo’s nickname.

During the Christmas season, lovely Nativity scenes are set up on the road by the Catholic residents of Negombo with beautiful statues and artistic decorations. Unlike in Europe, no one would dare to vandalize such expressions of faith.

The Priest in Society

The Catholic priest is held in high regard and this can be seen in the fact that a priest is not allowed to queue up [i.e. wait in line] in a Government office building or in a bank. He is looked after as soon as he enters the place. In the bus, if all the seats are taken, someone would immediately give his seat to the priest coming in.

As a priest, you actually experience that Sri Lanka is very special even before coming to the country. For instance, after boarding a plane of the National air carrier, Srilankan Airlines, the crew will treat you in a particular way. They would often bring you a drink before take off, even if you are in economy class, and once the meal is about to be served, a nice crew member would bring your tray before everyone else. Once you have disembarked at the Colombo airport, you won’t queue up at the Immigration counter, as an officer will invite you to have your passport stamped before all other travelers.

On leaving the country, at the Colombo airport, there are special seats for the clergy (Buddhist and Catholic) and at the gate, a member of staff will invite the priest to board the plane first, with the VIPs, even if he is in economy class. The obliging manners of the Srilankan Airlines crew expressed themselves when in 2010, a relic of Saint Anthony of Padua came to Sri Lanka. The relic was brought by plane aboard a Srilankan Airlines aircraft. For the occasion, Srilankan Airlines chose two Catholics as pilot and co-pilot. Moreover, the relic wasn’t put in the plane hold but it was given a business class seat. When the relic arrived at the airport, it was welcomed like a head of State. Outside the airport, Saint Anthony was placed on an official vehicle escorted to Colombo by the army and the police.

So who did the bombings?

The Easter Sunday attack was really meant to hurt the Catholic community in a special way. First[,] the bombings occurred on the greatest feast day in the year, [and] secondly, the two most popular saints in Sri Lanka are Saint Anthony of Padua and Saint Sebastian. The terrorists did not choose their target by chance. They hit Saint Anthony’s shrine in Colombo and Saint Sebastian’s church in Negombo, which are both very attended churches. The police are still trying to find out who masterminded the attacks[,] but many people here already have a good idea of what the answer is. [NB: As noted above, the Islamic State has claimed responsibility. — CFN Ed.]

Is the SSPX safe?

Like for any churches in the country, we have to be vigilant. The church must remain closed except for Mass. We are advised to avoid any unnecessary travelling. A curfew is in force from 6pm to 6am. Our priory is not prominent, and so is quite unlikely to be the target of any harmful operation, but who knows? One of the bombed churches is only two kilometers away from where we stay. Your prayers and support are then very much sought for. Pray especially for this beautiful country that has so much to offer so that it quickly overcomes this trial and remains a peaceful place.

To help the missions of Asia:

Euro Zone: (For a tax receipt)

Cheques payable to “MISSIONS” in EUR (with mention “SSPX Asia”) and to be sent to: MISSIONS, 60 avenue du Général Leclerc, 78230 LE PECQ, France.

Cheques payable to “FRATERNITE ST-PIE X” in CHF (with mention: “District d’Asie”) and to be sent send to: Priesterbruderschaft St.Pius X, Schwandegg, 6313 Menzingen.

Cheques payable to “The Society of St. Pius X” in AUD and to be sent to: The Asian Missions, c/o 20 Robin Crescent, WOY WOY, NSW 2256, Australia.

To donate directly through PayPal.

Send us a short note (districtoffice@fsspx.asia) to let us know [of] your donation. May God give it back to you a hundredfold!

Reprinted with permission from FSSPX.news.