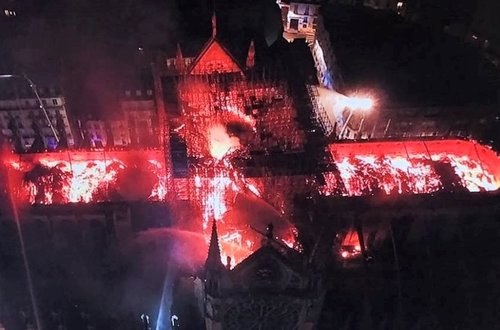 (Photo: While firefighters battled the Notre Dame inferno into the night on April 15, 2019, drones captured overhead shots of the blaze as it consumed the entire roof of the iconic cathedral. The above photo was released by French police and circulated widely on social media.)

“Thou didst hear His words out of the midst of the fire.” — Deuteronomy 4:36

We live in a world that has lost the value of logic, but the power of symbols is still extraordinary, given that symbols are used by the mass-media system to create emotional-reactions, often replacing the role of reason. There are in fact two ways of arriving at the truth: one through reason, the other through symbols. But the two ways are complementary, not alternative. Jesus, for example, uses the language of symbols, but also convincing logic. Rational language is founded on the principle of non-contradiction, whereas symbolic language is based on images and visible signs referring to an invisible reality. A symbol renders immediately comprehensible that which is veiled to the eyes of reason. Logic helps to decipher the language of symbols. Everything our senses experience has a significance and leads to the invisible, of which it is a reflex and imitation.

In the case of the Notre Dame fire, everyone perceived the symbolic value of the wounded cathedral, but few have sought to understand the symbolic significance of what happened. Notre Dame, like all cathedrals, represents the Catholic Church in its architectural impetus towards Heaven. How [is it possible] not to see in the smoke and flames that enveloped it on April 15, the image of the smoke and flames enveloping the Church of Christ? As far back as 1972, Paul VI spoke of the “smoke of Satan” penetrating the Temple of God. This smoke today is the result of a fire that ravaged the Church, until it carbonized the very top. Might it not be possible to see in the collapse of the fleche — Notre Dame’s tall spire — the fall of the pinnacle of the Church?

At this time, another symbolic image overlaps that of the Notre Dame blaze: a scene with Pope Francis, Vicar of Christ, kissing the feet of three Sudanese Muslim leaders, asking them “to extinguish the fires of war once and for all.” This happened on April 11 at the end of a spiritual retreat in the Vatican, conceived by the (schismatic) Archbishop of Canterbury, Justin Welby. Immediately afterwards, on the first day of Holy Week, the French cathedral — the most famous and most visited in the world after St. Peter’s — was consumed by flames.

In the world of those faithful to Tradition, there is an ongoing discussion, at times heated [in the attempt] to establish whether this or that verbal expression by Pope Francis can be considered heretical. But this theological and canonical investigation risks staying abstract and ignoring the language of gestures, which expresses in a direct manner a reality that every baptized person who has kept his sensus fidei can easily discern. Well, then, rarely has the Church been humiliated by gestures like the one made by Pope Francis prostrated at the feet of political and other religious leaders. Francis is, in fact, the Vicar on earth of the King of Kings, to Whom everyone owes homage. There can never be any true peace outside the Truth proclaimed by Him Who is the only Prince of Peace. His dominion embraces all men, as Pope Pius XI reminds us in his encyclical Quas Primas, of December 11, 1925, citing the words of his predecessor Leo XIII:

“The empire of Christ extends not only over Catholic nations and those who, having been duly washed in the waters of holy baptism, belong of right to the Church, although erroneous opinions keep them astray, or dissent from her teaching cuts them off from her care; it comprises also all those who are deprived of the Christian faith, so that the whole human race is most truly under the power of Jesus Christ.” (Encyclical Annum Sacrum, 25 May 1899)

Pius XI adds: “If the kingdom of Christ, then, receives, as it should, all nations under its way, there seems no reason why should we despair of seeing that peace which the King of Peace came to bring on earth — He Who came to reconcile all things, Who came not to be ministered unto but to minister?”

On April 11, Jesus Christ was humiliated by His Vicar, with an act just as symbolic as the fire on April 15. In the tragedy of the blaze, Divine Providence did not allow the Holy Crown of Thorns to be destroyed, redeemed at great cost by St. Louis [IX], who in 1239, wearing only a linen tunic, and barefoot, welcomed it to Paris and carried it in procession. To safeguard this relic the Sovereign commissioned the building of Sainte Chapelle, an outstanding jewel of Gothic art. We must be grateful to the firefighter’s Chaplain, Father Fournier, who, defying danger, managed to save the Holy Species and the Crown of Thorns.

Jesus, after being scourged, insulted and besmirched with spit, was forced to wear a purple garment; a crown of thorns was thrust on His head, and, in His right hand, in the place of a scepter, a cane, to signify that His was a sham Kingdom. Then His executioners knelt in front of Him and adored Him in mockery, saying Ave Rex Judaeorum (Matt. 27:28-29). The Lord then came out in plain sight of everyone, dressed in purple, crowned with thorns: portans coronam spineam et purpureum vestimentum (John 19:5) and Pilate showed Him to the people, with the words: Ecce Homo: Behold the Man. The Prefect of the Praetorium spoke unknowingly through the mouth of the Holy Spirit, Who was saying: He appears to be merely a Man, but He is the Son of God, the Messiah, promised by the law, the King of men and Angels, the Savior of the human race.

In the same way, in this age of Passion we live in, the words Ecce Ecclesia seem to resound: behold the Bride of Christ, the only depository of the means of Salvation, the Queen of Peace, the Teacher of men, the Kingdom, whose keys have been entrusted to Peter. Behold Holy Church, covered in sores, disfigured, defiled. How is it possible that she be treated this way? Moved by sorrow and indignation, we adore the Church, directing our veneration in particular to the adorable relic of the Crown of Thorns.

In medieval cathedrals, like Notre Dame, the demons were represented under the form of grotesque and deformed sculptures, on the exterior of the church, which the wicked spirits cannot enter. When flares of fire inside the temple of God replace the pure light of the stained glass, it means that hell has entered. “The Fires of Hell in Notre Dame” was a headline on the front page of the German newspaper Bild of April 16.

The words of St. Louis Maria Grignion de Montfort, in the entreaty of his Inflamed Prayer, resound prophetically: “Fire! Fire! Fire! Help! Help! Help! There is fire in the house of God! There is fire in souls! There is fire even in the sanctuary!” But just as vibrantly, the Saint’s final invocation resounds in our hearts on this Easter Eve: “Exsurge, Domine, quare abdormis? Rise, Lord! Why are You pretending to sleep? Rise with all Your omnipotence, mercy, and justice. Form a company of bodyguards chosen to protect Your House, defend Your Glory and save souls, so that there is only one sheepfold and one Shepherd, and all may glorify You in Your Temple. Et in templo ejus omnes dicent gloriam. Amen.”

Reprinted with permission from Rorate Caeli.

The articles and conferences by Professor Roberto de Mattei can all be found on https://www.patreon.com/lepantofoundation.