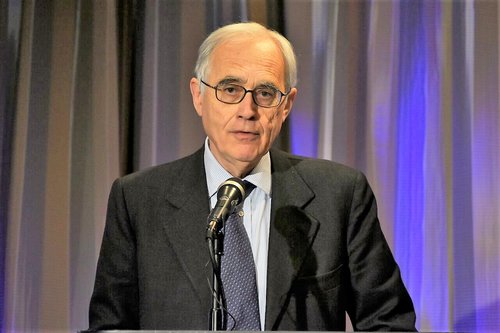 This past Wednesday (Mar. 20), the website Rorate Caeli published a lengthy “guest op-ed” by Bishop Athanasius Schneider entitled, “On the question of a heretical pope”. Upon discovering His Excellency’s text, I read it with great interest since the subject it addresses is becoming ever more relevant—indeed, urgent—in our times (see here and here for two worthwhile summaries).

Two days later (Mar. 22), Rorate Caeli published a follow-up interview with Professor Roberto de Mattei, president of the Lepanto Foundation, in which the esteemed Church historian offers his assessment (full text below). While Professor de Mattei identifies much that is good in Bishop Schneider’s text, he also candidly states, “I’m somewhat puzzled by his statement: ‘A pope cannot be deposed in whatsoever form and for whatever reason, not even for the reason of heresy.’ Monsignor Schneider denies the possibility of the loss of the papacy, while admitting this thesis has been voiced by great canonists and theologians, like Cardinal Cajetan and St. Robert Bellarmine, in favour of it.”

I shared the same sense of bewilderment after reading Bishop Schneider’s assertion that it is (or should be) impossible for a reigning Pope to lose his office, even for heresy, when the contrary is held by such “great canonists and theologians,” as Professor de Mattei observes.

St. Robert Bellarmine (1542-1621), for example, describes the “five opinions” on the question of whether a heretical Pope can be deposed in his famous treatise De Romano Pontifice (On the Roman Pontiff). Concerning the “third opinion…that the Pope is not and cannot be deposed either by secret or manifest heresy,” St. Bellarmine calls it “extreme” and “exceedingly improbable.”[1]

The great Jesuit and Doctor of the Church further explains, “The fourth opinion is of Cajetan,” who “teaches that a manifestly heretical Pope”—one who has been “convicted of heresy”[2]—“is not ipso facto deposed; but can and ought to be deposed by the Church.”[3] This opinion, held by the Dominican Cardinal Cajetan (1469-1534), was shared by John of St. Thomas (1589-1644), another luminary of the Dominican Order who is “acknowledged to be one of the foremost interpreters” of St. Thomas Aquinas (Catholic Encyclopedia).

Cardinal Raymond Burke seemed to express support for Bellarmine’s “fifth opinion” during an interview with Catholic World Report (Dec. 8, 2016): “If a Pope would formally profess heresy he would cease, by that act, to be the Pope. It’s automatic. And so, that could happen.” When asked later by the interviewer, “Who is competent to declare him to be in heresy?” His Eminence replied, “It would have to be members of the College of Cardinals.”

Professor de Mattei, would you care to give us your opinion on the study His Excellency Monsignor Schneider made on a “heretic Pope”?

I consider it an important document. Firstly, Monsignor Schneider is one of the most esteemed among contemporary bishops for his patristic culture and personal piety. Secondly, the subject is of very great interest and Monsignor Schneider had the courage to address it openly, unambiguously and uncompromisingly.

Regarding this document, what points do you most agree with?

First of all, I agree completely with Monsignor Schneider when he admits the possibility that a Pope can “promote doctrinal errors or heresies”, even if never ex cathedra. The hypothesis of a heretic pope is not only sustained by almost all theologians and canonists, but it is also a historical fact which occurred, for example, with Pope Honorius, and which can tragically be repeated. Another point that Monsignor Schneider clarifies well, in the light of Church teaching, is the stance that is to be taken when faced with a heretical Pope. “In dealing with the tragic case of a heretical pope, all the members of the Church, beginning with the bishops, down to the simple faithful, have to use all legitimate means, such as private and public corrections of the erring pope, constant and ardent prayers and public professions of the truth in order that the Apostolic See may again profess with clarity the Divine truths, that the Lord entrusted to Peter and to all his successors.” It is not enough to pray in silence, as if nothing has happened.

We need to resist and react. And the best way is that of fraternal correction, which is chiefly up to the bishops and cardinals, but which also ordinary lay-people can extend to the Pontiff, as happened with the Correctio filialis. I quote: “In this issue the numerical factor is not decisive. It is sufficient to have even a couple of bishops proclaiming the integrity of Faith and correcting thereby the errors of a heretical pope. It is sufficient that bishops instruct and protect their flock from the errors of a heretical pope and their priests and the parents of Catholic families will do the same.” I agree completely with Monsignor Schneider when he states that: “even if a pope is spreading theological errors and heresies, the Faith of the Church as a whole will remain intact because of the promise of Christ concerning the special assistance and permanent presence of the Holy Spirit, the Spirit of the truth, in His Church (cf. John 14: 17; 1 John 2: 27).”

Is there any point of Monsignor Schneider’s analysis that you don’t agree with?

I’m somewhat puzzled by his statement: “A pope cannot be deposed in whatsoever form and for whatever reason, not even for the reason of heresy.” Monsignor Schneider denies the possibility of the loss of the papacy, while admitting this thesis has been voiced by great canonists and theologians, like Cardinal Cajetan and St. Robert Bellarmine, in favour of it. The position that seems to me the most convincing is that of the Brazilian theologian, Arnaldo Xavier da Silveira – who died recently – which he sums up in chapter VII of his book Can a Pope be…a heretic? The Theological Hypothesis of a Heretical Pope (Caminhos Romanos, 2018). [Link added – CFN Ed.]

Arnaldo da Silveira retains that there is a profound incompatibility between heresy and ecclesiastical jurisdiction. However, loss of office is not automatic. Since as a visible society the Church’s official acts must also be visible, the heretical Pope continues in office until the full outward manifestation of his heresy. St. Robert Bellarmine teaches that the heretical Pope loses the papacy when his heresy becomes manifest. This is to be understood as a full manifestation, that is, one that imposes itself to acceptance by the sana pars [Lat. “healthy part”] of Catholics. If a part of Catholics considers the manifestation doubtful or insufficient, it is either because the latter is not full or the former are not the true sana pars. A clash will then become inevitable, and everything depending on the sensus fidei of Catholics and on the movements of grace. For as long as he is tolerated and accepted by the universal Church, the heretic will be true Pope, and in principle, his acts are valid. The loss of the Pontificate, therefore, will not result from a deposition by anyone but from an act of the Pope himself, who, by becoming a formal and notorious heretic will have excluded himself from the visible Church, thus tacitly resigning the Pontificate.

What then is your final consideration?

While not agreeing with the thesis that a heretic pope never loses the papacy, I think that Monsignor Schneider’s position is somewhat acceptable at the present time, in order to avoid that crypto-sedevacantism some traditionalists tend towards. On this point my position coincides with that of Monsignor Schneider, not on the theoretical level but on the practical level. I think that the errors or heresies of Pope Francis, even if professed publicly, do not entail his loss of the papacy, since they are not known and manifest to the Catholic population. When I speak of the Catholic population, I’m not referring to the Catholic public opinion in the widest sense of the term, but to that restricted group of baptized who are today maintaining the Catholic faith in its integrity. Many of them still interpret pro bono [“for good”] the words and actions of Pope Francis and do not perceive any malice. We cannot say, then, that his loss of faith is evident and manifest.

When St. Robert or Cajetan wrote their books, society was fully Catholic, the sensus fidei was developed and it was very easy to perceive the heresy of a priest, a bishop, even of a Pope. Today the large majority of the baptized, the priests, the bishops, even the Pope, are immersed in heresy and very few people can distinguish the true faith. So the correct indications by great classical theologians are difficult to follow in practice. The famous canonist Franciscus Xaverius Wernz in his Jus Decretalium (tomus VI, 1913, pp. 19-23) makes an important distinction between public and notorious crime. Publicum does not mean notorious: “Publicum est vocabulum genericum quod sub se complectitur notorium, manifestum et public simpliciter” (p. 21). A crime is publicum when it is diffused, but it is not known as a crime by all the people. Notorious means something more: the crime is known by all: “Notorious facts they need no proof” (can. 1747, 1).

In my view, the promotion and spreading of heresy by Pope Francis is public, but not notorious in the canonical sense of the term. For this reason, we must acknowledge him as Supreme Head of the Catholic Church. His deposition is for me unfeasible, not in thesis, but at this concrete, historical point in time. Everything, though, may change from one day to the next. In this sense, I too, like Monsignor Schneider, rely on Divine Providence, but without excluding future scenarios, like that of a heretic Pope possibly losing the papacy.

As discussion about how to handle a heretical Pope continues, CFN thanks Bishop Schneider and Professor de Mattei for their willingness to engage this important issue in the public forum, and to do so in a manner that is both respectful and edifying for readers.

[2] Bellarmine, De Ecclesia Vol. I (trans. Ryan Grant), Book III, Ch. 10 (Mediatrix Press, 2017), p. 293. The phrase “convicted of heresy” means that one is found to be obstinate after warnings by Church authorities. In the words of Bellarmine himself concerning ipso facto loss of office for heresy, “The authority is of St. Paul, who commands Titus, that after two censures, that is, after he appears manifestly pertinacious, an heretic is to be shunned [cf. Tit. 3:10-11]; and he understands this before excommunication and sentence of a judge.” (De Romano Pontifice, op. cit., p. 313).