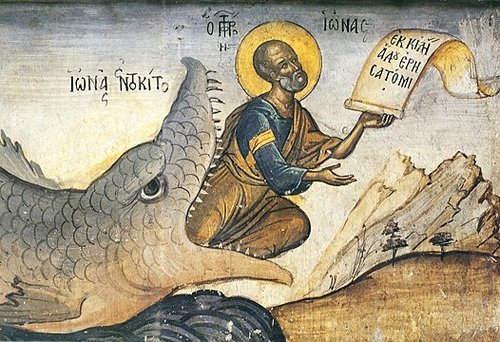 Ash Wednesday began the ‘forty-day’ period of Lent. Lent runs from Ash Wednesday through Holy Thursday, a total of 44 days, less the 6 Sundays before Easter, which technically results in 38 days of Lent. Adding Good Friday and Holy Saturday results in a total of 40 penitential days. Since Sunday is the day of the Lord’s Resurrection, the Sundays of Lent are not considered to be one of the forty penitential days, commonly referred to as Lent.

In Sacred Scripture, the number ‘forty’ often signifies a ‘period of purification’ that leads to new life. For example:

But the forty days that I want to focus on today is the forty days that God gave to the Ninevites to repent of their sins and reform their lives lest they be destroyed (see the Book of Jonah in the Bible). Nineveh (Ninive) was a “great city” of tremendous wickedness, probably comparable to any of our modern-day big cities.  As a result, God willed to send them the Prophet Jonah (Jonas) to get the Ninevites to repent.

Jonah was a Jew and he wanted the Ninevites, enemies of the Jews, to be destroyed. Therefore, Jonah got on a boat and sailed the other way. Being blamed for a huge storm that threatened the ship, the sailors threw Jonah overboard where he was promptly swallowed by a whale (great fish).

While in the belly of the whale for “three days and three nights” (Jon. 2:1), a foreshadowing of Christ’s Resurrection (cf. Matt. 12:39-41), Jonah repented and agreed to preach to the Ninevites. Thereupon, the whale vomited Jonah out of his mouth onto the shore of Nineveh.

Upon entering this enormously large city, Jonah proclaimed the Word of the Lord: “Yet forty days and Nineveh shall be destroyed” (Jon. 3:4). And the people of Nineveh believed in God. They proclaimed a fast, and put on sackcloth from the greatest to the least.  The king himself cast aside his royal robes and clothed himself in sackcloth and sat in ashes, calling to mind Ash Wednesday. The King proclaimed a fast, calling upon the citizens to turn away from their evil ways.

When God saw that the Ninevites turned from their evil ways, He had mercy on them and did not carry out His threatened punishment of destruction. Nineveh repented and was saved. On the contrary, Sodom and Gomorrah clung to their evil ways and were destroyed. Let us choose to follow the path of Nineveh, rather than the sordid ways of Sodom and Gomorrah, which our country, world, and certain wicked members of all ranks of the Church seem to be embracing today.

When I went to the seminary in the mid-1980’s, Modernist Biblical theology was teaching that stories such as Jonah and the whale were not historically accurate but fiction designed to communicate a truth. Modernist so-called ‘scholars’ would call the Book of Jonah (Prophecy of Jonas) a ‘Whales Tale.’ Well, I never agreed with the Modernists, then or now. And since my ordination to the holy Priesthood over thirty years ago, I have been preaching that I believe that Jonah and the whale actually happened, as well as other Biblical accounts.

At my first parish assignment, a parishioner heard me saying this in a sermon. The next day, he brought in a Biblical Commentary on the Book of Jonah that contained a reproduction of a New York Times article from the 1800’s. The news account told of a whaling vessel off the coast of New York who had a sailor throw his harpoon at a whale, missed, lost his balance, and then fell into the water. The whale then circled around, opened its huge mouth, and swallowed the sailor in front of his horrified shipmates.

Three days later, the ship caught sight of a whale and it was successfully harpooned.  They brought it on-board to gut it and keep all the good parts.  In their work, they noticed that the enormous belly of the whale was moving in an unusual fashion.  So they opened up the whale’s stomach and found their shipmate who had been swallowed three days previously STILL ALIVE!

But, he was different. All of his clothes and hair had disintegrated due to the digestive juices in the whale’s stomach. In addition, those same acidic juices turned his skin into shades of yellow, green and orange.

And now we possibly know why the people and the king of Nineveh listened to Jonah. Perhaps Jonah was a hairless bald man who was colored yellow, orange, and green! In that case, we need more yellow, orange and green people in our time to turn our world around and back to God. But God will settle for us, no matter what color we may be, to call our country, our world, and Modernists back to the traditional teachings of Christ and His Church: the One, Holy, Catholic and Apostolic Faith based upon the twin fonts of Truth, Sacred Tradition and Sacred Scripture.