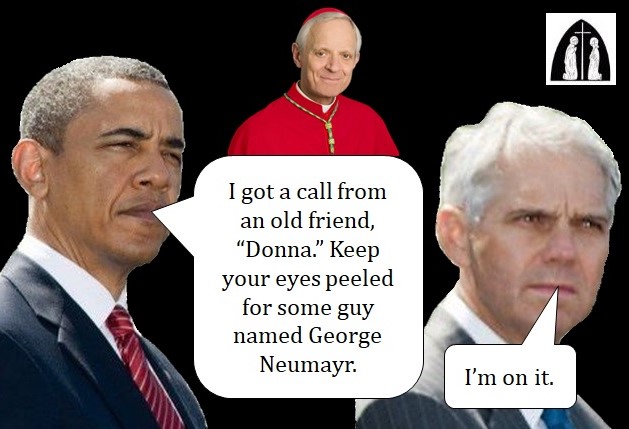 Why Is Obama’s Secret Service Head Working for Cardinal Wuerl?

Editor’s Note: George Neumayr, a Catholic investigative journalist and author of The Political Pope, is on a mission. Since the release of the Pennsylvania Grand Jury Report in mid-August, George has been on the ground in D.C. and elsewhere putting significant pressure on Cardinal Donald Wuerl, archbishop of Washington, to step down. The grand jury report exposed Wuerl as one who covered up cases of abuse during his tenure as bishop of Pittsburgh (1988-2006). Similarly, he is identified in Archbishop Carlo Maria Viganò’s now-famous testimony as one who knew full well about ex-Cardinal Theodore McCarrick’s crimes yet chose to say nothing. In the words of Archbishop Viganò, “The Cardinal lies shamelessly.”

George has faced significant obstacles and resistance while trying to probe more deeply into the disturbing case of Cardinal Wuerl. For a brief example, watch the following video recorded by him on the morning of August 26 (right after Viganò’s testimony was published) while attempting to question Chieko Noguchi, Director of Media and Public Relations for the Archdiocese of Washington’s Secretariat for Communications:

And since Labor Day, the plot has thickened substantially. In the following report (reprinted with permission from The American Spectator), George details how he came to discover that Mark J. Sullivan, former director of the Secret Service under President Barack Hussein Obama, is personally involved in efforts to blacklist and silence him:

This memo, dated Sept. 7, 2018, instructs security personnel at the Basilica of the National Shrine of the Immaculate Conception in D.C. to report immediately to a supervisor and call the police if George Neumayr is spotted on the grounds.

Could this be further evidence of a Vatican-Democratic Party Alliance, about which George wrote extensively in The Political Pope? After all, Pope Francis is indeed “the ecclesiastical equivalent of Barack Obama,” as George once characterized him during an interview.

George frequently posts updates about his ongoing investigative efforts on Facebook and Twitter, so make sure to follow him there. And if you are able, please consider donating to his journalism fund. As he stated recently on Facebook: 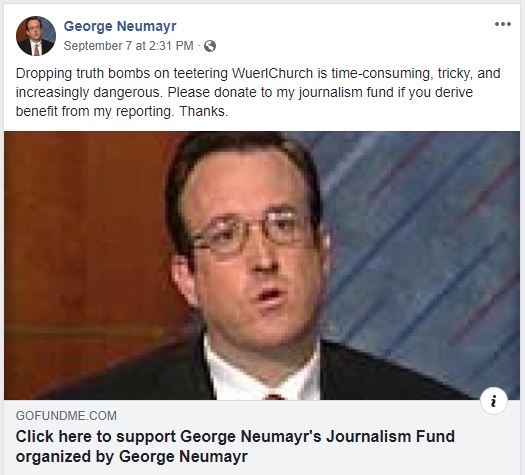 My troubling discovery as I investigate the corrupt prelate of Washington, D.C.

“Wuerl met with the pope on Thursday [August 30] and Francis wants him to determine his future by consulting with his priests,” a source close to the chancery informed me earlier this month. I broke that story on Twitter, then waited for the scandal-besieged Wuerl, who has emerged as the Cardinal Law of 2018, to return from Rome. I had heard that he was planning to meet with his priests on Labor Day at Little Flower parish in Bethesda, Maryland for a 5 P.M. meeting, with a cookout to follow.

I showed up to Little Flower parish on Labor Day around 3:30. The parish was largely deserted and the doors to the church locked — a fitting metaphor, I thought, for Wuerl’s faith-impeding tenure as the archbishop of Washington, D.C. It struck me as strange that Wuerl would want to use a parish named after a young saint as the venue for defending his long history of protecting pederasts while trying to convince his priests to give him the vote of confidence Pope Francis had asked him to secure (for the record, they didn’t, as was clear from their glum faces after the meeting ended and from the fact that Wuerl didn’t even eat dinner with them afterwards; a reliable chancery-connected source told me he simply said grace and then took off).

For Wuerl, this priestly confab was an exceedingly important event and he wasn’t about to let a gadfly journalist like me spoil it. As I saw Wuerl’s aides and what looked like to me some sort of crisis management team (serious-looking gentlemen, crisply but casually dressed) congregate in Little Flower’s parking lot, I walked toward them. They glanced at me nervously. One man finally walked toward me and said that the event was “closed” to the public. I said that I was a Catholic who wanted to pray in the church and that I had a canonical right to do so. He told me that he would need to “check” on the matter and we exchanged our names. His name: “Mark Sullivan,” he said. Do you, I asked him, work for the archdiocese of Washington, D.C.? He passed himself off merely as a Little Flower parishioner.

He returned momentarily, reiterating that the church was “closed” and that I needed to leave church property. His manner was polite and smooth and he looked a bit crestfallen when I told him that I found his answer unsatisfactory. Within minutes of our chat, six Maryland police cars arrived. The cops who arrived were friendly enough and permitted me to stand on grass belonging to an adjoining school not far from the parking lot.

Who, I wondered as I killed time until the priests arrived, was this “Mark Sullivan”? He looked awfully familiar. Fortunately, I had sent out a Tweet about our chat moments after it, which jogged my memory later and led one of my astute sources to say excitedly, “Is that the Mark Sullivan who was Obama’s disgraced Secret Service head?” My source had heard that he attended Little Flower parish.

I googled Obama’s Mark Sullivan and compared him to the man with whom I spoke. Yep, they were one and the same. I nearly dropped my phone as a chill went up my spine and the dawning realization hit: Obama’s Secret Service honcho had become Cardinal Wuerl’s. 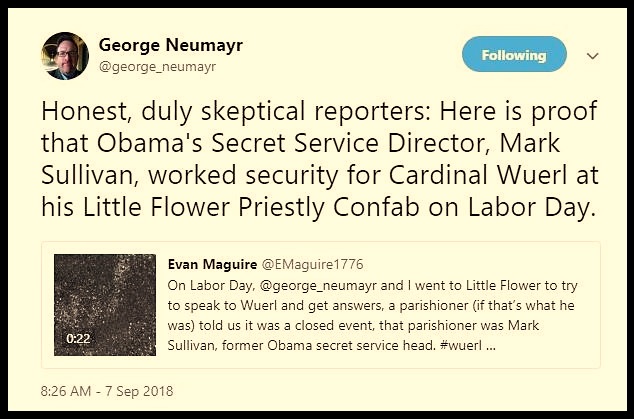 What made the discovery even more alarming was the subsequent harassment I received from security goons clearly working for Cardinal Wuerl, with whom I have had multiple encounters in August and September. Are all these goons working for Sullivan and the private security firm GSIS, of which he is a principal and co-founder? It looks like a real possibility.

As head of the Secret Service under Obama, Sullivan, recall, bungled a sex scandal similar, though not identical to, the scandals overlooked by Wuerl. During a presidential visit to Latin America, twelve of Sullivan’s agents managed to get themselves ensnared in an embarrassing-as-hell hooker scandal, raising serious questions about a deeply entrenched culture of corruption within the Secret Service. Sullivan appeared before Congress and tried unsuccessfully to cast the scandal as an isolated failing for an otherwise impeccable agency. Many senators didn’t buy his whitewash, and he had to retire with a dark cloud over his tenure.

Could it be that Sullivan is working as Wuerl’s Secret Service, in part out of the sympathy one compromised leader feels for another compromised leader? Or is Sullivan cynically combining work and pleasure, as it were, snatching a lucrative contract from a desperate cardinal while congratulating himself for his Catholic loyalties to the embattled Church?

Sullivan’s presence within Wuerl’s circle raises scary and troubling questions, especially in light of the fact that after he worked security at Wuerl’s Little Flower Priestly Confab I found myself tailed by a Wuerlian security goon. On September 4, I went over to Wuerl’s “pastoral center” in Hyattsville, Maryland. The treatment I received there was anything but pastoral: shortly after appearing in its foyer, a man with an openly displayed gun started shadowing me. When I returned to the car I was borrowing, the door was ajar. Then as I left the parking lot, a truck, with “archdiocese of Washington” emblazoned on the side of it, followed me.

After I watched the truck follow me for a bit, I darted off to the side of the road, which meant that the tailing vehicle jumped ahead of me. I then followed it, taking a picture of the truck’s license plate. The driver started acting very strangely, attempting to bolt but without success, owing to impeding traffic. I pulled up beside him, and the man, who looked to me like an ex-soldier or ex-spook, glared at me intimidatingly. He resumed driving, then slammed on his brakes, clearly intending to cause me to be rear-ended or clipped by the car behind me, which nearly happened.

At that point, I decided to call 911. He dropped back behind me, going right on University Avenue as I went left. “Go to a high-population area,” the operator instructed me. I parked in the lot of a shopping center and waited for a police officer. He eventually arrived and encouraged me to file a temporary restraining order against Cardinal Donald Wuerl and his representatives. Much more has happened, which I will detail in the coming days, but that’s enough for now.

Reprinted with permission from The American Spectator. To donate to George Neumayr’s journalism fund, CLICK HERE.

Marshall and Gaspers on Querida Amazonia and Freemasons in the Vatican