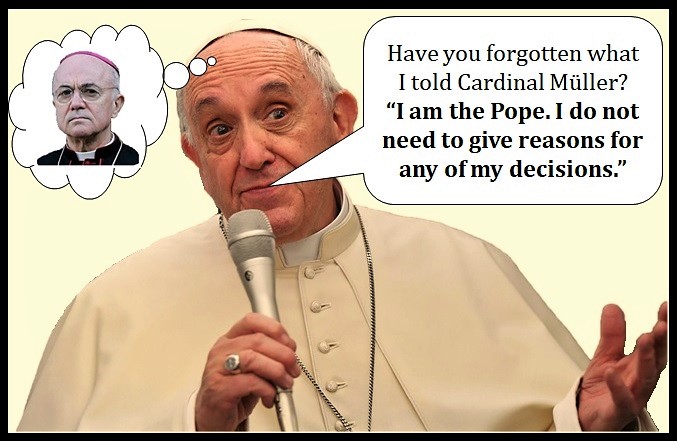 The historic witness by Archbishop Carlo Maria Viganò, which will surely go down as one of the turning points of ecclesiastical history, contains details on the Cardinal McCarrick affair that are devastating to a wayward Roman Pontiff who had already justly become known as The Dictator Pope. Archbishop Viganò provides direct testimony to the following facts:

Combine those facts with the following additional facts:

The conclusions that follow from these facts comprise a devastating indictment of Pope Bergoglio:

First, he knowingly rehabilitated McCarrick and relieved him from prior sanctions, even though he is a monster who had sexually abused boys and young men for decades.

Second, he feigned ignorance of McCarrick’s background when he sounded out Archbishop Viganò about where he stood regarding McCarrick in order to see if the Archbishop was friend or foe.

Third, after rehabilitating McCarrick, Bergoglio made him a “trusted counselor” who advised him on the elevation of three pro-homosexual prelates to the College of Cardinals: Cupich, Tobin and Farrell.

Fourth, Bergoglio retains Maradiaga as his right-hand man despite the indisputable evidence that Maradiaga is protecting a coterie of active sodomites in his own diocesan seminary.

Fifth, only adverse publicity caused Bergoglio to discipline McCarrick five years after he had rehabilitated him in 2013.

Sixth, Bergoglio is not moved to act against homosexual predators by anything except threatened harm to his own public image; otherwise he will protect the predators if they are his friends and supporters.

Seventh, homosexual predation by clerics, even cardinals, does not really horrify him and impel him to act, despite his pious declarations to the contrary.

Now consider that during the return flight from Dublin after the utterly useless “World Meeting of Families,” Bergoglio refused to address the accusations against him in Archbishop Viganò’s sworn testimony.  Instead, when a reporter queried him on the subject he gave the answer of a shifty liberal politician who is counting on a sympathetic press to cover for him:

“Read the statement carefully yourselves and make your own judgment. I am not going to say a word about this. I believe that the statement speaks for itself, and you all have sufficient journalistic ability to draw conclusions. It is an act of trust. When a little time goes by, and you have drawn conclusions, perhaps I will speak about it, but I would like your professional maturity to do this work. It will do you all good, really.”

The stonewalling continues with the assistance of the Vatican Secretary of State, Cardinal Pietro Parolin (also named in Viganò’s testimony). Asked by La Stampa “What can you say on the former Nuncio’s text? Is it fair? Is it wrong?”, Parolin gave this shifty non-answer: “It’s better not to go down into details on such things. I repeat that which the Pope says: you read it and make your judgement. The text speaks for itself.”  Why is it “better not to go into detail on such things”? Better for whom? Better for Bergoglio, obviously, but not for the Church.

The arrogance on display here is staggering. Bergoglio truly believes that he can simply ignore the well-supported accusation of a respected prelate that for five years he knowingly enabled a serial sexual predator in a cardinal’s hat simply because that predator happens to be one of his friends. This is the modus operandi of a dictator, not someone who can be called “Holy Father” with a straight face.

To his credit, Bishop Thomas John Paprocki, joining a growing number of other prelates, has issued a statement vouching for Archbishop Viganò’s credibility. He further declares that Bergoglio’s non-response to the Archbishop’s allegations

“is not adequate. Given the gravity of the content and implications of the former Nuncio’s statement, it is important for all the facts of this situation to be fully reviewed, vetted, and carefully considered. Toward that end, Pope Francis, Vatican officials and the current Apostolic Nuncio should make public the pertinent files indicating who knew what and when about Archbishop (formerly Cardinal) McCarrick and provide the accountability that the Holy Father has promised…”

The statement supporting Archbishop Viganò by Bishop Robert Morlino of the Diocese of Madison, Wisconsin politely mocks Bergoglio’s arch suggestion that journalists will find a way to cover for him:

“However, I must confess my disappointment that in his remarks on the return flight from Dublin to Rome, the Holy Father chose a course of “no comment,” regarding any conclusions that might be drawn from Archbishop Viganò’s allegations. Pope Francis further said expressly that such conclusions should be left to the “professional maturity” of journalists. In the United States and elsewhere, in fact, very little is more questionable than the professional maturity of journalists.

The bias in the mainstream media could not be clearer and is recognized almost universally. I would never ascribe professional maturity to the journalism of the National Catholic Reporter, for example. (And, predictably, they are leading the charge in a campaign of vilification against Archbishop Viganò.)”

That “campaign of vilification” is not limited to the liberal Catholic press, however. None other than Cardinal Cupich, the friend of Bergoglio who was given the Archdiocese of Chicago on McCarrick’s recommendation, is leading a campaign to bury Viganò’s testimony—without, of course, denying one iota of it. As Cupich told NBC News: “The Pope’s got a bigger agenda.  He’s got to get on with other others—of talking about the environment and protecting migrants and carrying out the work of the Church.  We’re not going to go down a rabbit hole on this.”

Yes, the environment and immigration are much more important than the role of a Pope in rehabilitating and advancing the career of a sexual degenerate and serial predator he knew to be such but didn’t care. Confronted by NBC’s reporter with Viganò’s allegation that the evil McCarrick had lobbied for Cupich for Cardinal Archbishop of Chicago, Cupich essentially admitted it while bobbing and weaving:

NBC: So, because of Archbishop Viganò’s claims that McCarrick had lobbied for you?

NBC: I know you responded by a statement, but what do you say to that?

Cupich: Well, I would say – first of all – I’ve been appointed by three popes. Not just by Francis. I was appointed in 1998 by John Paul II, 2010 by Benedict XVI. It’s not as though I just fell out of the sky.

I worked at the Vatican embassy in the ‘80s, I was the rector of the pontifical seminary, the only pontifical seminary in the United States, so it’s not as though I was a newcomer. People knew me in Rome, and so on. I don’t think that I needed one person to be my advocate and I believe that—I believe that the pope wanted someone who was pastoral, as he said, and I was a candidate that he looked at seriously.

Notice how deftly Cupich avoids the question whether McCarrick in particular lobbied for him. And, being the slippery ecclesiastical politician that he is, Cupich even dared to play the race card against Vigano and all the Catholics who applaud his courageous intervention:

“… There’s a small group of insurgents, who have not liked Pope Francis from the very beginning… And, quite frankly, they also don’t like him because he’s a Latino and that he is bringing Latino culture into the life of the Church, which we have been enriched by and I think that that’s part of all of this too.”

Of course, Bergoglio is not a Latino but an Italian whose parents were immigrants to Buenos Aires, a cosmopolitan city that hardly fits into the category of “Latino culture” to which Cupich appeals in a blatant attempt at character assassination.

Here is the bottom line: Bergoglio is guilty as charged, which is why he is “taking the Fifth,” but he is hoping to escape responsibility by waiting out the storm while his friends run interference for him. But I believe this storm will not pass. Voices all over the Catholic world are calling on Bergoglio to resign the papacy, and what was once derided as a crackpot demand is now mainstream news. And now even the unaccountably timid Cardinal Burke declares: “The request for resignation is in any case licit; anyone can make it in the face of whatever pastor that errs greatly in the fulfillment of his office, but the facts need to be verified.”

God willing, not this time.