Pope’s Change to Catechism is Not Just a Prudential Judgment, but a Rejection of Dogma

Editor’s Note: Even in the wake of yesterday’s bombshell news, there remain certain individuals (some of them well-intentioned, no doubt) who are clinging desparately to the false belief that Pope Francis did not intend to “change doctrine” vis-à-vis his “revision” of the post-conciliar Catechism of the Catholic Church on capital punishment (para. 2267, to be exact). A prime example of such desperation is the following Facebook post I encountered yesterday evening: 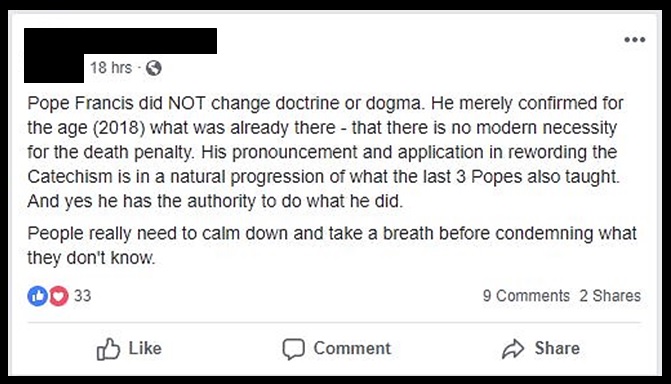 Regardless of one’s intentions, burying our heads in the sand and refusing to acknowledge the gravity of what is transpiring is not a valid option for serious Catholics. Thus, Catholic Family News thanks Dr. Peter Kwasniewski for his sober treatment of the subject in his column for LifeSiteNews published earlier today (reprinted here with permission). May such continued honesty and pressure from the faithful provoke the hierarchy to take action and resist Pope Francis “to the face” (Gal. 2:11).

In the avalanche of reactions to Pope Francis’s audacious move to modify the Catechism so that it says the opposite of what the Church and every published catechism had ever taught before, there is one line of argument that has surfaced a great deal: “Pope Francis is not making a doctrinal statement about the illegitimacy always and everywhere of the death penalty but merely a prudential judgment about the inopportuneness of its use at this time in history.”

In a recent article, Dr Alan Fimister correctly points out that even if this reading were plausible, the Pope has overstepped his jurisdiction by offering an opinion about a contingent matter of political judgment, which is the proper realm of the laity and not of the ecclesiastical hierarchy, as per the teaching of the Magisterium (e.g., Leo XIII in Immortale Dei).

As much as I might wish that this interpretation of the papal “correction” of the Catechism of the Catholic Church were true, I cannot concur with it, because it fails to do justice to the actual presentation of the new teaching in the revised text of 2267. Let us take each paragraph:

Recourse to the death penalty on the part of legitimate authority, following a fair trial, was long considered an appropriate response to the gravity of certain crimes and an acceptable, albeit extreme, means of safeguarding the common good.

The implication here is that it used to be thought—indeed, by everyone in the Catholic tradition—that capital punishment could be employed by a legitimate authority. But such a thing can be thought no more. And why?

Today, however, there is an increasing awareness that the dignity of the person is not lost even after the commission of very serious crimes. In addition, a new understanding has emerged of the significance of penal sanctions imposed by the state. Lastly, more effective systems of detention have been developed, which ensure the due protection of citizens but, at the same time, do not definitively deprive the guilty of the possibility of redemption.

Today, in modern times—so the argument goes—we have made a new discovery, foreign to the earlier philosophical and theological tradition, that human persons have a dignity that cannot be lost, no matter what crime they may commit. This is certainly a surprising claim to make, as, on the one hand, the truth of the metaphysical dignity that consists in being made to the image and likeness of God is present from the first page of the Bible and has been universally upheld by all Catholic philosophers and theologians of all centuries, and, on the other hand, the moral dignity that consists in living in accordance with that image and likeness can obviously be lost by serious crime. One can never forfeit the right to be treated as a person, but one can forfeit the right to be included as a member of civil society. It is the same with supernatural dignity: a baptized Christian always retains the dignity of being a child of God, for this is rooted in the sacramental character indelibly marked on the essence of the soul; but a Christian who commits mortal sin forfeits heaven and, if he dies in that state, will suffer eternally. The death penalty is a natural analogue to the eternal punishment awarded by the divine Judge.

This second paragraph, although it mentions the contingent issue of reliable systems of detention, is advancing the view that we are now aware of an intrinsic and inalienable dignity of the human person that must be respected to the point of never utilizing the death penalty. In other words, the Catholic tradition prior to Francis failed to recognize this dignity and contradicted it in practice by using (or defending the use of) capital punishment. This claim is, to use the classic language of theological censures, at very least temerarious, and more likely proximate to heresy.

Then comes the conclusion Francis has been driving towards:

Consequently, the Church teaches, in the light of the Gospel, that “the death penalty is inadmissible because it is an attack on the inviolability and dignity of the person,” and she works with determination for its abolition worldwide.

All doubt of the nature of this novel teaching is removed by this final paragraph. The reason “the Church” now declares the death penalty “inadmissible”—let us give this word its full force: unable to be admitted, incapable of entry (and this is said without qualification of time or place)—is that “it is an attack on the inviolability and dignity of the person.” It is, in and of itself, contrary to human dignity and the human good. The death penalty is wrong, not because we have better detention systems, and not because modern governments are already too cavalier in their treatment of human life (which is unfortunately true). It is wrong because the “the light of the Gospel” shows us that it goes against something always and everywhere true, namely, the inviolable dignity of the person.

If this is not a philosophical and theological assertion, I do not know what is. If this is not intended to be a magisterial statement about what is intrinsically right and wrong, I do not know what is. In short, the replacement text for 2267 leaves no room for maintaining that the Pope is recommending a shift in policy or a temporary adjustment. He is indeed promoting a shift in policy—nothing short of “worldwide abolition.” But he is doing so because he believes that the thing in itself is and cannot but be wrong.

This is precisely where he himself is wrong and can be known to be wrong, for two reasons.

First, there is no need to beat around the bush: this new teaching is simply contrary to what the Church has always officially taught. One example among a thousand, taken from the Roman Catechism of the Council of Trent, will suffice to illustrate the traditional doctrine:

The power of life and death is permitted to certain civil magistrates because theirs is the responsibility under law to punish the guilty and protect the innocent. Far from being guilty of breaking this commandment [Thou shalt not kill], such an execution of justice is precisely an act of obedience to it. For the purpose of the law is to protect and foster human life. This purpose is fulfilled when the legitimate authority of the State is exercised by taking the guilty lives of those who have taken innocent lives. In the Psalms we find a vindication of this right: “Morning by morning I will destroy all the wicked in the land, cutting off all evildoers from the city of the Lord” (Ps 101:8).

In the case of the dogma of the intrinsic morality of the death penalty, the denial of this dogma is formally heretical, since it contradicts a doctrine which is contained in divine revelation and which has been proposed as such by the ordinary and universal magisterium of the Church.

That is, to state that the death penalty is inadmissible for theoretical reasons, as we have seen is the Pope’s position, is contrary to established dogma, and therefore formally heretical.

Second, the new teaching requires a false understanding of “development of doctrine,” the wand that enables a magisterial magician to put a frog in the hat and pull out a rabbit. As the letter from the CDF cheerfully and blusteringly tells us: “All of this shows that the new formulation of number 2267 of the Catechism expresses an authentic development of doctrine that is not in contradiction with the prior teachings of the Magisterium.” Voila, just like that—a rescript rabbit!

But the letter gives away too much. For it claims that the new statement is a development of doctrine, so it is not just a “prudential matter,” a “juridical matter” as some would have it, but a matter of what is true always and everywhere: it is the doctrine of the Catholic Church on the death penalty, not its recommended social policy. This logically requires that “inadmissibility” be a roundabout way of saying illegitimacy, and therefore, immorality. (Would not a Catholic who continued to espouse the death penalty, or who meted it out, or who administered it, now have to be considered to be acting immorally?)

The Pope has thus avoided the easy road. He could have said “This is not expedient” and left it at that, as did John Paul II. But he chose the high road: “This is now Catholic doctrine, as more fully understood in our times.” As Fr. Zuhlsdorf commented yesterday, the notion of the development of doctrine in play is clearly not that of John Henry Newman, for whom development refines and expands, but does not undermine or reject, what was taught earlier. When a later teaching departs from an earlier one, it is a corruption, not a development.

Pope Francis is obviously and sadly wedded to a conception of papal authority that has little to do with the First Vatican Council’s articulation of the papacy’s inherently conservative nature, by which it receives and transmits, in its integrity, the apostolic faith as it passes through the ages—growing in expression, yes, but not morphing into something different or opposed to itself. Tragically, by functioning as a doctrinal maverick, the pope offers to Protestants, Eastern Orthodox, and the entire world the spectacle of a papacy that confirms rather than denies the familiar anti-Catholic caricature of papal positivism and hyperultramontanism that reasonable and faithful people could do nothing other than reject.