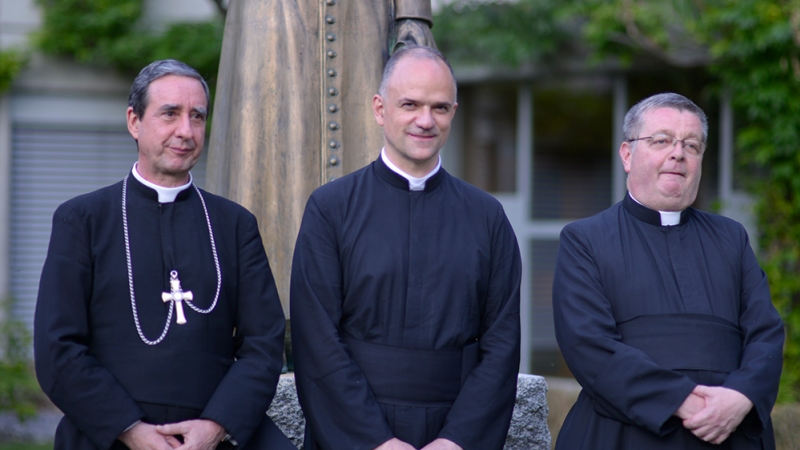 As the General Chapter of the Society of St. Pius X has come to an end, the SSPX released two videos with the new First and Second Assistants. The first is with Bishop Alphonso de Galarreta. In this interview, His Excellency discusses many encouraging experiences he has had traveling the world to administer the sacraments and supervise the religious communities affiliated with the SSPX.

In the second, Father Christian  Beauchacourt, Second Assistant, echoes the sentiments of the new Superior General, Father Davide Pagliarani, that their concern will be for the core mission of forming and caring for priests.

Finally, the Chapter concluded by issuing a statement that reaffirms, in its entirety, the famous declaration of Archbishop Lefebvre from November 1974. The statement concludes by reaffirming the heart of the mission of the SSPX to form priests for the Traditional Mass, the Mass of All Times: “The Priestly Society of Saint Pius X intends to pursue its principal purpose, which is the priesthood as Our Lord Jesus Christ instituted it, and always to keep the priesthood focused on its very reason for existing: the Holy Sacrifice of the Mass.”

Although the eyes of the world will always be drawn to the political, particularly the latest news about the politics of relations with Rome, the General Chapter and new superiors have attempted to remind the world that the SSPX’s mission is the preservation of Catholic Tradition through the preservation of the priesthood. All other concerns are secondary to this primary purpose.

All of the interviews and the Chapter’s closing statement are positive signs for the direction of the Society over the next 12 years.

Archbishop Viganò Addresses Demonstration in Switzerland, Calls Them to a Higher Cause

PDF Button Editor’s Note: Archbishop Carlo Maria Viganò has provided Catholic Family News the text of a message he is delivering to a protest today in Switzerland against the health dictatorship. The Archbishop...