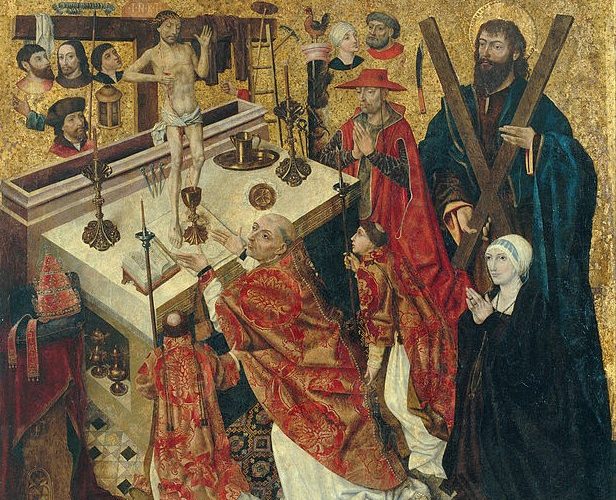 The Importance of the Roman Mass

Back in April of this year (2018), I was privileged to speak at the Catholic Family News Conference on the topic, “The Roman Mass: Bulwark of the Faith”. The overall theme of the conference was “The Weapons of Our Warfare” and CDs of all the talks are available for purchase (call 1-800-474-8522).

The main objective of my talk was to demonstrate how the traditional Roman Mass has been—and continues to be—both a defensive and offensive tool for the Catholic Faith. There were also three subpoints: 1) to show the significance of the name “Roman Mass”, 2) to encourage hope in the special protection enjoyed by this liturgical rite throughout history, and 3) to give some practical tips on how we can currently promote its restoration.

In order to make these points known to a wider audience, this article will offer them again, but in a condensed form. Furthermore, the primary focus will be switched to the particular name “Roman Mass”, which to my mind has incredible importance for our day, yet has often been overlooked. Hopefully, the re-presentation of the aforementioned points will not only prove the great significance of the proper name for the traditional Roman Liturgy, but thereby amplify the nature of the liturgical battle against the Novus Ordo Missae.

Doctrine and the Liturgy

In developing the important point of nomenclature, let us begin by briefly exploring the greatest hallmark of the traditional Roman Mass, its doctrinal orthodoxy. As indicated in my talk’s original title, the Roman Mass has been a bulwark of the Faith throughout the ages of Christianity.

In speaking of the various liturgical rites that exist within the Catholic Church,[1] all have their origin with the first Mass offered by Our Lord Jesus Christ during the Last Supper on Holy Thursday. In obedience to His command to “do this in memory of Me”, the Holy Apostles offered the same unbloody Sacrifice wherever they spread Christianity. From Apostolic times, the liturgy developed according to the cultures of various regions,[2] thereby leading to a beautiful diversity of rites of Mass which share essential and ritualistic elements.[3]

Here it is important to note that Christ Himself instituted the Holy Sacrifice of the Mass and so the liturgy is part of Sacred Tradition, the first pillar of the Church (the second being Sacred Scripture). And as we will see later in our historical examination, parts of the Roman Mass are also of Apostolic Tradition. Thus, the essentials of the sacred liturgy (e.g., the conditions necessary for the valid confection of the sacraments as given in their rites) are a matter of the Faith.

In addition to fulfilling Christ’s mandate on the night of Holy Thursday, the sacred liturgy—and thereby the sacramental rites—also expresses the Catholic Faith in its prayers and ceremonies. In fact, the first use of the axiom “lex credendi, lex orandi” (originally expressed as “the law of prayer is the law of believing”) occurred in the 5th century by Prosper of Aquitaine as an appeal to orthodox doctrine expressed in the liturgy against the Pelagian heresy.[4]

While all liturgical rites of the universal Church express the Faith, concerning the doctrinal purity of the Roman Mass in particular, it is interesting to note that for centuries the Credo was not sung during the Holy Sacrifice at Rome. This did not occur until 1014—by Pope Benedict VIII under pressure from Emperor Henry II—who asked why it was not sung (as was the custom north of the Alps), to which the Roman clergy replied that the “Roman Church had never been disturbed by error and therefore had no reason to profess the Credo so often”.

Throughout the ages of the Church, as doctrines were more fully developed—for example, the Real Presence of Christ in the Eucharist, the sacrificial nature of the Mass and priesthood, etc.—the prayers of the liturgy were subsequently enriched, which enabled numerous popes, councils and bishops to refute heresies and errors through the liturgical texts.

The most famous example occurred in the 16th century when the Council of Trent published 20 dogmatic canons in relation to the Blessed Sacrament and the Sacrifice of the Mass.[5] In the 20th century, Cardinal Alfredo Ottaviani would describe in his letter to Pope Paul VI—which served as a foreword to “A Brief Critical Study of the New Order of the Mass”—that these Tridentine canons on the Mass “provided an insurmountable barrier to any heresy directed against the integrity of the Mystery.”

A further act of the Council of Trent that ensured the purity of doctrine was the reform and publication of a codified Roman Missal—Missale Romanum— to be used by all who celebrated the Roman Mass. This was done in 1570 by order of Pope St. Pius V via the papal bull Quo Primum. While it had been a long-time goal to have a standardized Roman Missal throughout the Latin Church,[6] the necessity to protect the texts of the Mass from Protestant heresies finally brought this project to fruition.

There is one final proof of the Roman Mass as a clear expression of the Catholic Faith, and that is the fact that Protestants have consistently refused to use the Missale Romanum because they deny the doctrines that its prayers express on the Blessed Sacrament and the sacrificial priesthood. A noteworthy exception are High Church Anglicans, who actually accept these doctrines, but unfortunately remain separated from the Supreme Pontiff.[7] However, with the publication of the Novus Ordo Missae, several Protestant denominations adopted it nearly verbatim, thereby demonstrating its heterodoxy.[8]

But while the Catholic liturgy is a source of true doctrine, nevertheless, Pope Pius XII clarified in his encyclical Mediator Dei the meaning of the axiom “lex orandi, lex credendi” against the error of using the liturgy as “a kind of proving ground for the truths to be held of faith”, stating:

“The sacred liturgy, consequently, does not decide or determine independently and of itself what is of Catholic faith. More properly, since the liturgy is also a profession of eternal truths, and subject, as such, to the supreme teaching authority of the Church, it can supply proofs and testimony, quite clearly, of no little value, towards the determination of a particular point of Christian doctrine.” (n. 48)

As we have seen above, the Roman Mass has been renowned for its doctrinal purity and consequently the promotion and defense of the Faith, thereby providing us with a sensus Catholicus. For this reason, the Roman Mass is the most visible element of the Traditional Movement. In the words of Cardinal Franjo Seper, who stated disparagingly in 1978, we Traditionalists “make a banner of this Mass”.[9]

Indeed, the traditional Roman Mass is our banner, especially for the reason expressed by Cardinal Ottaviani within the preface of the previously cited “Brief Critical Study of the New Order of the Mass”:

“… the Novus Ordo represents, both as a whole and in its details, a striking departure from the Catholic theology of the Mass as it was formulated in Session XXII of the Council of Trent.”

Part 2: The Historical Legacy of the Roman Mass

[1] There are several primary liturgical branches within the Church. In the West, there is the Latin Rite, which includes not only the Roman Rite, but also the Dominican, Carthusian, Ambrosian, Mozarabic, etc. In the East, there are the Byzantine, Antiochian, Alexandrian and Armenian Rites.

[2] For more about the development of the various rites from a single “Parent Rite”, see Dr. Adrian Fortescue’s work, The Mass: A Study of the Roman Liturgy, available from Angelus Press.

[3] These accidental elements include such things as ministerial offices, vestments, liturgical books, the use of incense, a hieratic form of language, and plainsong chant.

[6] Prior to Quo Primum, the observance of the Roman Mass could differ not only from diocese to diocese, but even parish to parish. The codification finally standardized such texts as the Preparatory Prayers and Offertory Prayers, while officially adding the Last Gospel as part of the Mass (which formerly had been a private devotion of the celebrant).

[7] It should also be mentioned that Anglicans do not possess valid Holy Orders in order to confect the Holy Eucharist (see Pope Leo XIII’s Apostolicae Curae).

[8] For more on this point, see my August 2013 article for The Remnant, “What About Those Six Protestants and the New Mass?”

[9] This was said on November 18, 1978 during an audience of Archbishop Marcel Lefebvre with Pope John Paul II, who was on the verge of granting wider access to the traditional Mass nearly 30 years before Summorum Pontificum. Unfortunately, Cardinal Seper’s words pressured the pope to reconsider such an action.