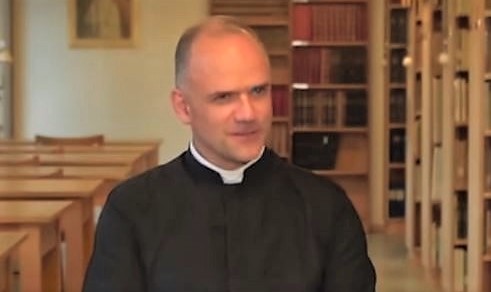 Earlier today, the 101st anniversary of Our Lady’s third apparition at Fatima (during which She entrusted the great Secret to the three shepherd children), the first interview with the Society of Saint Pius X’s newly elected Superior General, Fr. Davide Pagliarani, was released by FSSPX NEWS. Conducted in French shortly after Fr. Pagliarani’s election on July 11, it is a brief but edifying introduction to the new head of the largest force for Tradition within the Church:

Reverend Superior General, how do you feel after your election?

Let’s say that I had, of course, heard some rumors beforehand. However, I was wondering how much of it was a joke or if there was anything to it at all. So I was waiting until today. I have to admit that even now, I’m not sure how much I realize what happened today.

It’s been a long day, but the week before, during our retreat, I left everything in the hands of the Blessed Virgin Mary and Divine Providence. I really think that she has always been present in the history of the Society. She is also guiding this Chapter and all of us. But maybe it’s too early yet for me to think about it.

Could you please introduce yourself?

I’m from Rimini, a town on the Adriatic coast of Italy, where there has been a priory of the Society for a long time. That’s where I first came in contact with the Society of Saint Pius X. I entered the Seminary of Flavigny in 1989. Then I did my military service. In 1996, I was ordained a priest. I spent seven years as a priest in the town where I was born, three years in Singapore, then I came back to Italy, and I have been in Argentina for six and a half years. And now I’m here.

Until now you were rector of the seminary in Argentina…

I think that what’s going to be hardest for me will be having to leave that place. I find that it’s the most beautiful place for a priest, and in particular for a priest of the Society. The heart of the Society is our seminaries. It’s not Menzingen! I think you know what I mean…

That’s where priests are formed and you can see how grace, still today, can completely transform a young man. Every vocation is a miracle, and I’m convinced that you fully understand what the Society is when you’ve worked in a seminary.

What do you expect from your two assistants?

I have to admit that they are two men for whom I have great respect. I know them fairly well because I knew Father Bouchacourt in Argentina, and I also know Bishop de Galarreta quite well. I consider myself quite lucky to work with people older than myself, people who give sound advice and, I have to say, with a priest as friendly as Father Bouchacourt.

Do you have any projects planned for the Society of Saint Pius X?

The goal of the Society is the formation of priests. However, at the same time, the priest has to continue to mature, to learn, and to sanctify himself his whole life long. I believe that’s where we need to concentrate all of our efforts to help priests persevere in the quest for holiness.

I really think that each priest, each priestly life, is a little bit like a violin cord that has to be correctly tightened and adjusted so that it can always produce the right note…the note that God expects from each one of us. So from seminary life and training to what is expected of the priest afterwards in the ministry, a certain unity and continuity in the quest for holiness must continue. I am convinced that this is the solution to the majority of our problems.

That’s a good question. It’s easy to answer the first part. First of all, I would like to thank the faithful for all of their prayers for this Chapter and tell them that the Chapter has only just begun. So now we have to discuss with all the subjects on the agenda over the next few days. Thu,s I thank them for their prayers since the month of January, and I ask them now to generously redouble their efforts.

And then, what do they expect from me? I think that they expect the Society to be faithful to its foundational mission. I’ve already mentioned that it was founded to form priests, but the priesthood exists for the sanctification of souls, and so the fidelity of priests to their priesthood, to their own sanctification, necessarily affects the faithful. That’s what the faithful expect, not only from me, but from all the priests of the Society.

In light of today’s Fatima anniversary, I am reminded of the following words of Archbishop Marcel Lefebvre, the venerable founder of the SSPX, during his sermon for the 1988 Episcopal Consecrations – “Operation Survival”, as he called it:

“Of course, you well know the apparitions of Our Lady at La Salette, where she says that Rome will lose the Faith, that there will be an “eclipse” at Rome; an eclipse, see what Our Lady means by this.

And finally, closer to us, the secret of Fatima. Without a doubt, the Third Secret of Fatima must have made an allusion to this darkness which has invaded Rome, this darkness which has invaded the world since the Council. And surely it is because of this, without a doubt, that John XXIII judged it better not to publish the Secret: it would have been necessary to take measures, such steps as he possibly felt himself incapable of doing, e.g., completely changing the orientations which he was beginning to take in view of the Council, and for the Council.

There are the facts upon which, I think, we can lean.” [emphasis added]

May Our Lady of Fatima, Queen of the Most Holy Rosary and Mother of the Church, continue to watch over the Society of Saint Pius X, and especially its new leader.

Archbishop Viganò: Pray the Rosary for the End of the Pandemic Emergency.

PDF Button HOLY ROSARY FOR THE END OF THE PANDEMIC EMERGENCY 15 October 2021 Four hundred fifty years ago, on 7 October 1571, the Christian fleet led by Don Juan of Austria won a resounding victory over the...