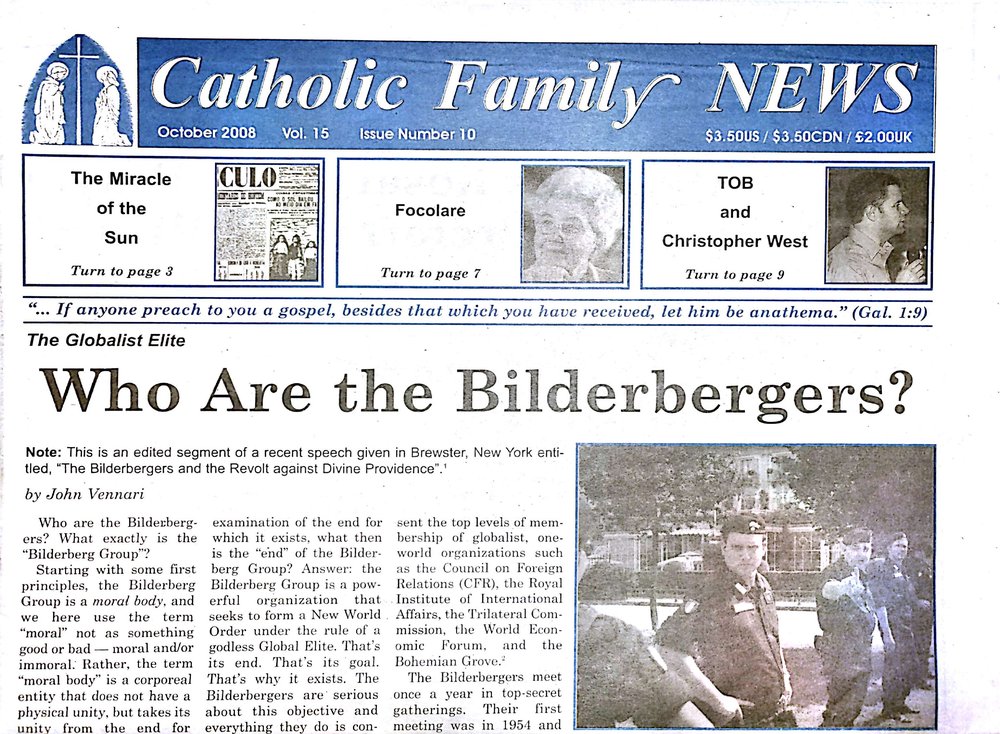 John Vennari (1958-2017), longtime Editor of CFN, diligently reported on the history and activities of the globalist elite.

Editor’s Note: Earlier this week, LifeSiteNews published a truly explosive report revealing that Cardinal Pietro Parolin, the Vatican’s Secretary of State (top diplomat) under Pope Francis, is a participant in this year’s Bilderberg meeting (June 7-10, 2018), the annual gathering of “a powerful organization that seeks to form a New World Order under the rule of a godless Global Elite” (John Vennari). In light of Cardinal Parolin’s official visit to Moscow last fall and his efforts to broker a deal with the Chinese Communist Party earlier this year, perhaps it should come as no surprise that he received an invitation to the globalist table (see here for the full list of participants). He is even being discussed as a possible successor to Pope Francis. One can only wonder what Parolin will say on behalf of the current Roman Pontiff, who has proven himself a world-class propagandist for globalist causes. Our Lady of Fatima, pray for us! — Matt Gaspers, Managing Editor

TURIN, Italy, June 6, 2018 (LifeSiteNews) – A top Vatican cardinal will join globalist elites from Western Europe and America in a secretive behind-closed-doors meeting this week to discuss the populist rise in Europe as well as the U.S. midterm elections, among other things.

Pietro Cardinal Parolin, 63, the Vatican’s Secretary of State, has been invited to join the globalist Bilderberg Meeting for 2018 in Turin, Italy.

The Bilderberg meetings have been used as a forum for world elites since 1954 to further their vision for the world. Attendees are free to use information from the discussions. No one is allowed to reveal who said what.

High-profile individuals who have participated in the Bilderberg meeting at one time or another include elites such as David Rockefeller, Bill Gates, Bill and Hillary Clinton, Angela Merkel, Tony Blair, Emma Bonino, Pierre Elliott Trudeau.

This week, 128 participants from 23 countries will discuss twelve themes: “populism” in Europe; “inequality”; “the future of work”; artificial intelligence; the “US before midterms”; free trade; “US world leadership”; Russia; quantum computing; Saudi Arabia and Iran; “the ‘post-truth’ world”; and current events.  Last year so-called “populism” was eighth on the agenda; this year it is first. Governments derided as populist have been elected in both Czech and Italy since last year’s meeting.

According to its own literature, the purpose of the annual Bilderberg Meeting is to “foster dialogue between Europe and North America.”

Some Vatican observers are wondering if Parolin will deliver a special message from Pope Francis to attendees. Since his election in 2013, Pope Francis has backed globalist causes, such as climate change and the UN’s Sustainable Development Goals. Parolin will be the first guest from Vatican City to ever attend a Bilderberg meeting.

The cardinal is one of the most powerful Curial officials and has been regarded by Vatican watchers as positioned to succeed Francis. Parolin has asserted that Pope Francis’ teaching in Amoris Laetitia represents “a paradigm shift” for the Church. He has been criticized by Chinese Cardinal Zen for the Vatican’s “suicide” deal with China. And he was involved along with the Vatican in the hire of a pro-gay law firm that sought to shut down a Catholic website critical of Pope Francis.

“The highly secretive yearly meeting of the Bilderberg Group has come under increasing scrutiny with each passing year,” Daniel McAdams told LifeSiteNews. McAdams is the executive director of the Ron Paul Institute for Peace and Prosperity.

“These Bilderberg globalists disdain the non-elites and particularly resent national sovereignty and the popular vote,” McAdams continued. “Their top-down ‘we know what’s best for you’ approach hurts rather than helps the world’s poorest.”

The way McAdams sees it, Cardinal Parolin is an unusual choice of guest.

“While the Roman Catholic Church is truly a global organization, it is thankfully not a globalist organization,” he said.  “While the inclusion of Cardinal Parolin in this year’s meeting should not necessarily draw our scorn, we should understand that the Bilderbergers and similar groupings of the largely unelected elite more often than not stridently oppose rather than endorse Catholic teaching.”

McAdams named tech billionaire Bill Gates as a regular attendee of the Bilderberg Meetings, and pointed out his clash with Catholic teaching on life and family.

“He is on record endorsing some of the most anti-Catholic views imaginable,” McAdams told LifeSiteNews. “At a TED talk a few years ago, Gates openly opined on how we can lower the world’s population by a billion.”

Gates was airing his theories about how to stop global climate change, which he believes is man-made.

“His recommendation? By using ‘new vaccines, health care and reproductive health services, we could lower (the population) by perhaps 10 or 15 percent,” said McAdams, quoting Gates. “That means killing babies to get to his goal of reducing carbon dioxide output.”

McAdams wondered if Parolin was attending the meeting to evangelize the world elites or to network with them.

“Were Cardinal Parolin to attend the meeting and deliver an uncompromising defense of the Catholic position on matters such as life and the principles of subsidiarity, we should be pleased that he ‘flew the flag’ in otherwise hostile territory,” he said.

“However, if his only purpose is to rub shoulders with the elites and in so doing grant a kind of legitimacy to an event that undermines our Catholic principles, then we should view his participation very negatively,” McAdams concluded.

A media representative from the Bilderberg Meetings told LifeSiteNews that their guests are chosen as private individuals, not as representatives of their employers or firms.

“The Bilderberg meetings have always seen a high diversity of sectors, backgrounds and opinions,” wrote the Bilderberg Media Team. “Participants take part as individuals in their own right.”

“For us, the key question is whether participants have an interesting perspective to contribute, independently from their affiliation of function,” they added.

This article first appeared at LifeSiteNews. Reprinted here with permission.

Antonio Socci: The Real Objective of the Film Francesco Is To Bring Down Trump and Elect Biden By Antonio Socci — 25 October 2020 First published by Libero Just this morning, Bergoglio has announced the creation of 13...

Scapegoating Francis: How the Revolution of Vatican II Serves the New World Order

Editor’s Note: Catholic Family News is grateful to Archbishop Carlo Maria Viganò for sending us a copy of the address he delivered this past weekend at the Catholic Identity Conference (Oct. 23-25, 2020) for... 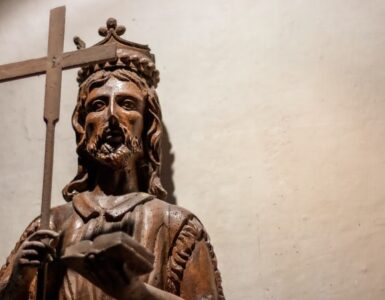 May His Kingdom Come: Catholic Social Teaching, Part VII – The Kingship of Christ, Source and Summit of the Social Order