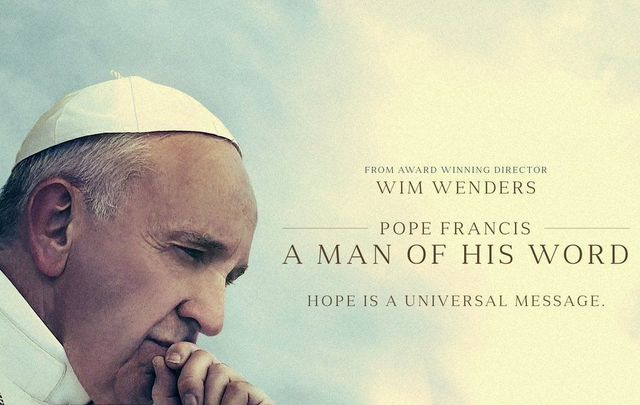 A Man of His Word…But His Word Is the Problem!

Thus said Joseph Goebbels, the “Minister of Public Enlightenment and Propaganda” for Nazi Germany from 1933-1945. To his list of three requirements for a dictatorship, I would add an obvious fourth (given his office, I’m surprised Goebbels didn’t mention it): propaganda. In order for a man and his ideas to amass a following—especially if said man and/or his ideas are bad—it is necessary to propagate a favorable narrative, one which typically appeals first to the emotions rather than the intellect, and which omits inconvenient truths.

This sums up the new film Pope Francis: A Man of His Word quite well (although I’m certainly not equating Francis with Hitler). I decided to go see the film on opening weekend (it premiered on May 18 across North America)—for investigative journalism purposes only, of course—and if I was forced to use a single word to describe it, I would have to go with propaganda. From start to finish, it is obvious that the film’s purpose is to (1) propagate a favorable narrative that (2) appeals first to the emotions rather than the intellect and which (3) omits inconvenient truths.

As I opted not to try and take notes in the dark theater, I will do my best to recall the film’s particulars from memory (surely Pope Francis and his dear atheist friend, Eugenio Scalfari, would approve).

For starters, one of the film’s central themes is the inaccurate comparison between St. Francis of Assisi and Pope Francis. The former is falsely portrayed as “an apostle of Vatican II’s new brand of dialogue and ecumenism” (to quote John Vennari), while the latter is shown to be a veritable “reincarnation” of the pretend St. Francis.

Towards the end of the film, for example, footage from the 2016 World Day of Prayer for Peace ceremony in Assisi is shown (a syncretic gathering modeled on Pope John Paul II’s scandalous 1986 meeting), followed by the narrator saying something like, “Here in Assisi, the legacy of St. Francis lives on.” This is absolute nonsense, of course, seeing that the real St. Francis was a staunch Catholic who called all men—even the Islamic Sultan of Egypt—to convert to the one true Faith for salvation.

Globetrotting: For Christ or the New World Order?

The film’s documentary “plot” focuses on the Argentine Pope’s travels around the world, not to preach the Gospel and convert souls like St. Peter (e.g. “Do penance, and be baptized” – Acts 2:38), but to promote “progressive” causes such as environmentalism, climate change, the rights of workers and migrants, ending poverty, interreligious dialogue, fraternal harmony among all peoples, etc. (For anyone interested, Sister Rose Pacatte describes in greater detail these themes in her glowing review of the film written, predictably, for the National Catholic Reporter.)

“For the first time in history,” says the narrator in the film’s trailer, “the Pope opens his doors to address the questions and issues we face together…In a divided world, one leader has a mission to bring us together.” Together in Christ and His one true Church? Or together in some sort of Masonic brotherhood of man apart from Christ? Since Francis emphasizes in the film, yet again, his strong abhorrence of “proselytism” (i.e. trying to convert souls to the true Faith), let the reader decide what sort of “unity” the current Roman Pontiff is pursuing. For myself, one thing that comes to mind are the following words of Cardinal Willem Jacobus Eijk, Archbishop of Utrecht (Netherlands), at the end of his recent commentary piece on the German bishops’ “intercommunion” proposal (i.e. the admittance of Protestant spouses to Holy Communion in “some cases”):

“Observing that the bishops and, above all, the Successor of Peter fail to maintain and transmit faithfully and in unity the deposit of faith contained in Sacred Tradition and Sacred Scripture, I cannot help but think of Article 675 of the Catechism of the Catholic Church:

Before Christ’s second coming the Church must pass through a final trial that will shake the faith of many believers. The persecution that accompanies her pilgrimage on earth will unveil the “mystery of iniquity” in the form of a religious deception offering men an apparent solution to their problems at the price of apostasy from the truth.’”

As for the numerous inconvenient truths about Francis and his pontificate—for example, “the propagation of heresies effected by the apostolic exhortation Amoris laetitia and by other words, deeds and omissions of” his (Correctio filialis)—they are completely absent from this film, which is essentially an exercise in shameless self-promotion.

For the sake of combating the propaganda, let us recall just a small sampling of his most scandalous “words, deeds and omissions” that continue to wreak havoc:

These examples are truly just the tip of the iceberg, but I believe the point has been sufficiently made. (For those interested in more, see “The A – Z list of concerns with Pope Francis” at LifeSiteNews.)

“Don’t Trust Him An Inch”

To conclude this brief critique, I can do no better than to quote what Henry Sire (aka Marcantonio Colonna), author of The Dictator Pope, told me about the film towards the end of our recent interview:

“If you look at the trailer for this film, it begins: ‘No matter what divides us, his words unite us.’ This, about the most divisive pope the Church has seen for centuries. It is typical of the whole tenor of liberal propaganda, which depends on standing the truth on its head. … [I]f there were a film-maker prepared to do his homework, a good subject for a film would be Bergoglio’s career in Argentina in the forty years prior to his papal election. It could be titled: ‘Jorge Bergoglio: Don’t Trust Him An Inch.’”