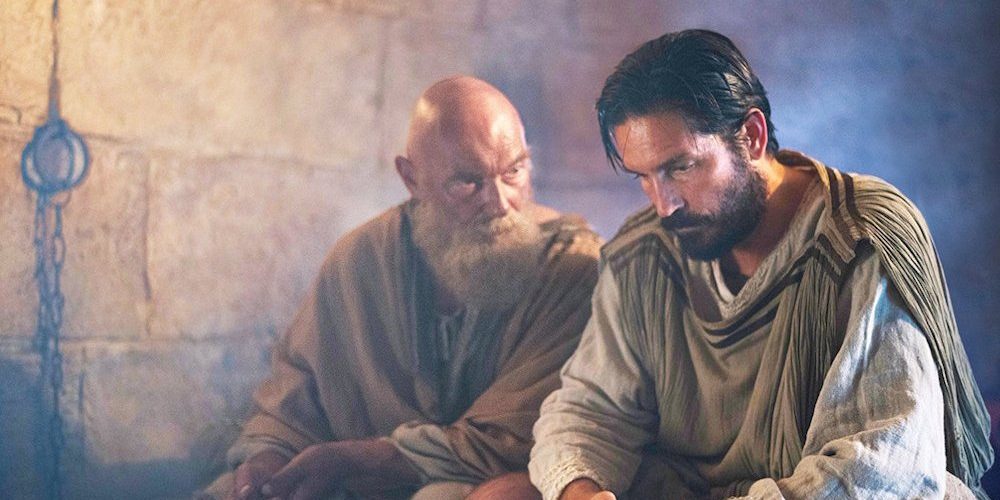 To Suffer for Christ: Reflections on Paul, Apostle of Christ

“For unto you it is given for Christ, not only to believe in Him, but also to suffer for Him: Having the same conflict as that which you have seen in me, and now have heard of me” (Philip. 1:29-30).

Over the weekend, my wife and I went to see Paul, Apostle of Christ, which premiered throughout the United States on March 23. We were both so moved by the film that, after exiting the theater, we spent several moments in silence, contemplating the depth of what we had just seen, before discussing our thoughts. For myself, the reality of suffering for Christ stood out as the predominant theme – and more specifically, the sobering fact that most of us in modern Western society have no idea what it means to truly suffer for Christ.

The film, set in Rome in A.D. 67 during St. Paul’s final days in the Mamertine Prison, not only portrays the Apostle’s great sufferings, but also those of all the faithful in Rome. The imperial tyrant and madman, Nero, who falsely accused the Christians of setting fire to the city (when he, in fact, may have been the real culprit),[1] spared no efforts in terrorizing, torturing, and slaughtering his scapegoats. And although their sufferings are generally not displayed in graphic detail, viewers are nevertheless given a powerful glimpse into the fear, pain, and devastation endured by innocent men, women, and children for their faith in Christ. The Roman historian Tacitus summarized their torments as follows:

“Covered with the skins of beasts, they were torn by dogs and perished, or were nailed to crosses, or were doomed to the flames and burnt, to serve as a nightly illumination, when daylight had expired. Nero offered his gardens for the spectacle, and was exhibiting a show in the circus, while he mingled with the people in the dress of a charioteer or stood aloft on a car. Hence, even for criminals who deserved extreme and exemplary punishment, there arose a feeling of compassion; for it was not, as it seemed, for the public good, but to glut one man’s cruelty, that they were being destroyed.” (The Annals, Book XV, 44)

Amidst our rather sheltered, comfortable, workaday lives, it can be easy to forget that such implacable hatred and violent persecution still exists in the world today. Whether in the Middle East, China, India, Nigeria, or elsewhere, Christians continue to face “the loss of all things” (Philip. 3:8), including their very lives, at the hands of modern-day Neros. Hence, the timeliness of this film cannot be overstated as the global persecution of Christians continues to rise.

Suffering “for the Name of Jesus” (Acts 5:41) has been a component of Christian life since the beginning, as Our Lord promised it would: “If the world hates you, know ye that it hath hated Me before you. If you had been of the world, the world would love its own: but because you are not of the world, but I have chosen you out of the world, therefore the world hateth you. Remember My word that I said to you: The servant is not greater than his master. If they have persecuted Me, they will also persecute you” (John 15:18-20). St. Paul echoed Our Lord when he wrote that “all who will live godly in Christ Jesus shall suffer persecution” (2 Tim. 3:12) in one form or another. The question, then, is: How do we respond to such suffering and cooperate with it in a fruitful manner?

Throughout his writings, which constitute a large portion of the New Testament, St. Paul repeatedly touches on the theme of suffering. His testimony and insights are all the more valuable as they come from one who suffered greatly himself, as in one place he summarizes:

By the grace of God, however, St. Paul learned to embrace his sufferings and even came to rejoice in them, “knowing that tribulation worketh patience; and patience, trial; and trial, hope; and hope confoundeth not: because the charity of God is poured forth in our hearts, by the Holy Ghost Who is given to us” (Rom. 5:3-5). By exercising the virtues of faith, hope, and above all charity – which “beareth all things, believeth all things, hopeth all things, endureth all things” (1 Cor. 13:7) – he discovered the secret to overcoming all hardships: “I can do all these things in Him Who strengtheneth me” (Philip. 4:13). He learned to rely completely on Christ and the sufficiency of His grace (cf. 2 Cor. 12:7-10), for “with Christ I am nailed to the cross,” he declared, “And I live, now not I; but Christ liveth in me” (Gal. 2:19-20).

The Transforming Power of Grace

The good news is that, as members of Christ’s Mystical Body the Church, we have access to the very same grace that transformed the infamous “Saul of Tarsus” (Acts 9:11) into “Paul, an apostle of Jesus Christ”.[2] As Fr. Gabriel of St. Mary Magdalen articulates so well in his spiritual classic, Divine Intimacy:

“Jesus washes and purifies our souls in His Blood; He nourishes them with His Flesh, instructs them by His doctrine; every day, and many times a day, He renews His sacrifice upon the altar on our behalf; Jesus, glorious at the right hand of the Father, is always interceding for us, obtaining grace and dispensing it to us according to our need. Jesus sends us the Holy Spirit, His Spirit, that He may guide us on the road to sanctity. Jesus gives us His Mother, the most Holy Virgin Mary, that She may be our Mother, our refuge, our support in time of trial. What more could we desire? Should we consider these graces less precious because they form part of the ‘ordinary’ graces accorded to all souls? Oh! if we were truly convinced of the great efficacy of these means of sanctification, we would not seek others; instead of waiting for some extraordinary favors in order to give ourselves wholly to God, we would work at corresponding with great fidelity to the grace which He offers each day with wonderful largesse, and thus we would surely achieve our end.”[3]

As we have now entered into Holy Week, the final preparation for the Sacred Triduum, let us resolve to follow the example of St. Paul and the entire “white-robed army of Martyrs” (Te Deum) so that, when our time comes to depart from this life, we too may say in truth: “I have fought a good fight, I have finished my course, I have kept the faith” (2 Tim. 4:7).

[1] Tacitus, the ancient Roman historian, describes the tragic event and subsequent persecution of Christians in The Annals, Book XV, 38-44.

Abp. Viganò: Meditation for the Season of Advent