FATIMA: They have Removed Jesus from the Cross – In More Ways than One

Troubling to me and to my Traditional Latin Mass pilgrims during the 100th Anniversary Year of Our Lady’s appearances were the bizarre, high-profile ‘crucifixes’ that we observed at both the new and old basilicas at Fatima.

The Crucifix with a suffering Christ is the symbol par excellence of the sacrificial nature of the Mass. The Holy Sacrifice of the Mass makes us present to Christ’s victory over sin and death at Calvary. In this regard, the condemnation of the Second Council of Nicaea (787 AD), quoted by St. Pius X, would fall on those “who dare, after the impious fashion of heretics, to deride the ecclesiastical traditions, to invent novelties of some kind … or endeavor by malice or craft to overthrow any one of the legitimate traditions of the Catholic Church” (Pascendi, n. 42). 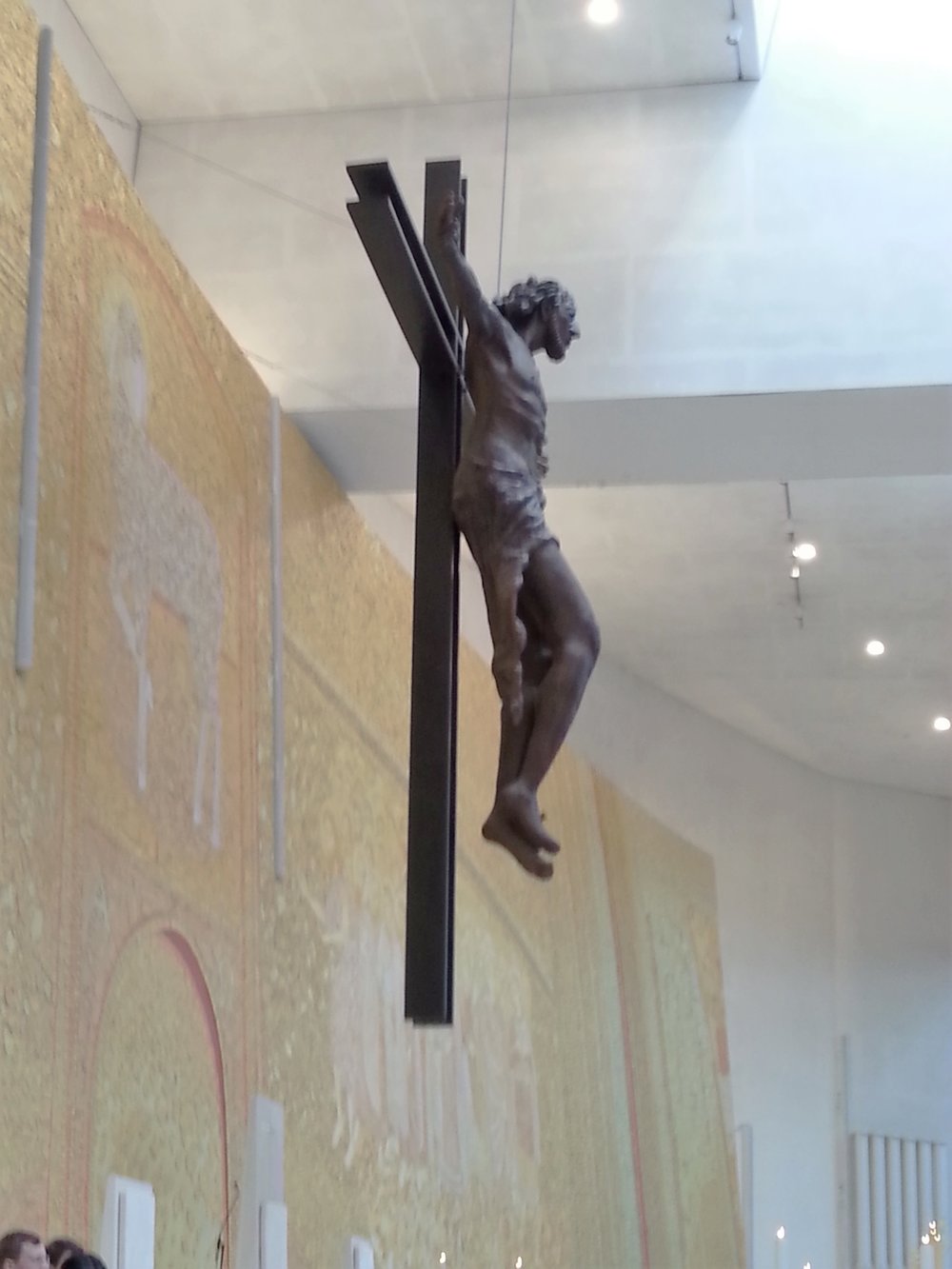 The ‘crucifix’ inside the Basilica of the Most Holy Trinity displays a strange, modern-art bronze Corpus clearly detached from the Cross, as if Jesus were leaving. An official pamphlet of this new basilica describes this indoor “crucifix” suspended over the Altar/table as follows: “It represents Christ Who offers Himself willingly for us. He is shown as alive, glorious, ready to embrace the world and coming off the cross.” 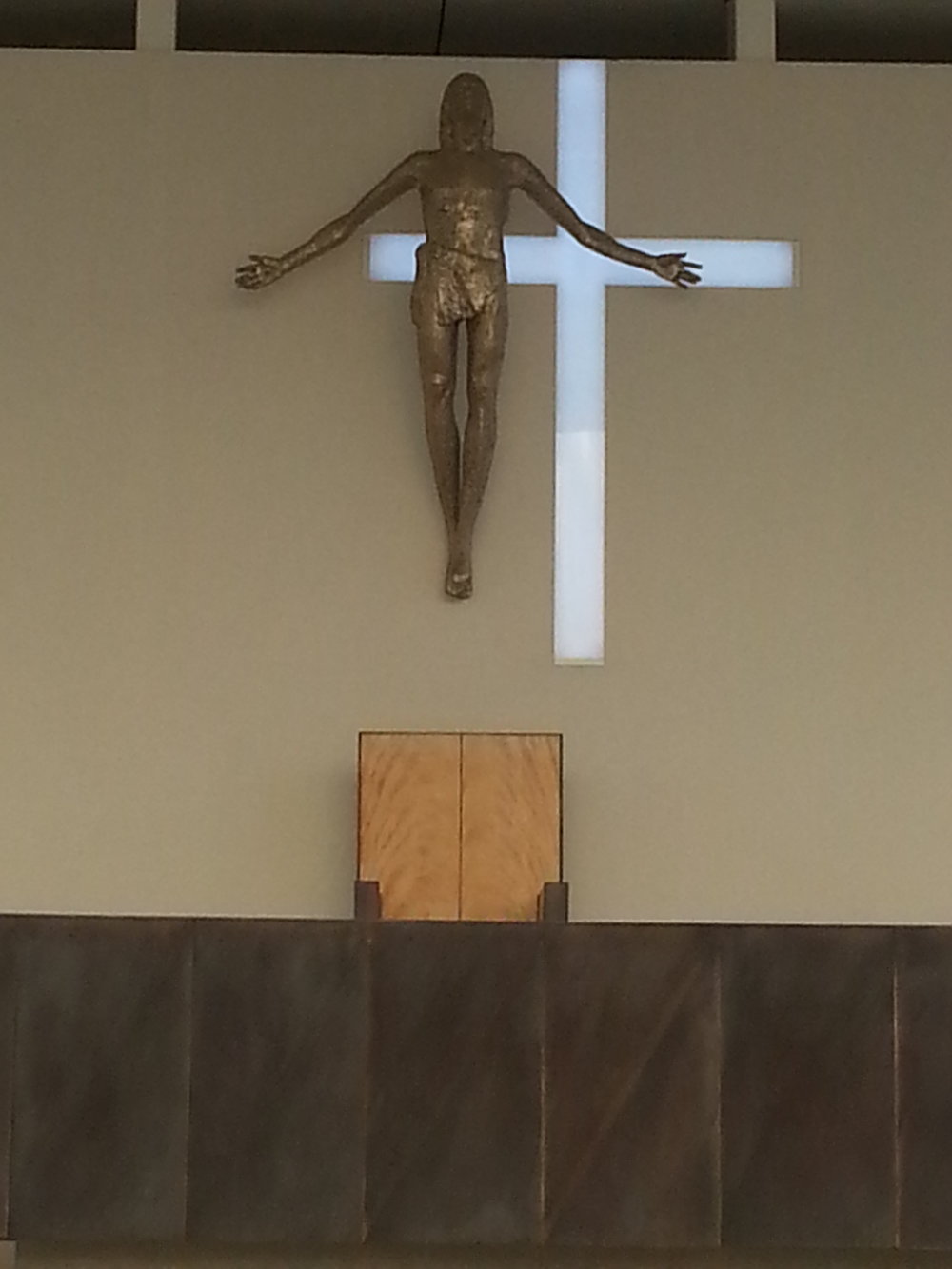 The ‘crucifix’ at the outdoor Altar/table on the steps of the venerable Basilica of Our Lady of the Rosary, shows the Body of Jesus separated from the Cross, seemingly floating away.

Androgynous depictions of Jesus Christ seem to be promoted by those groups who favor ‘alternative lifestyles’ or by others who want to be ‘politically correct’ in what has become a degenerate ‘gender-neutral’ society. 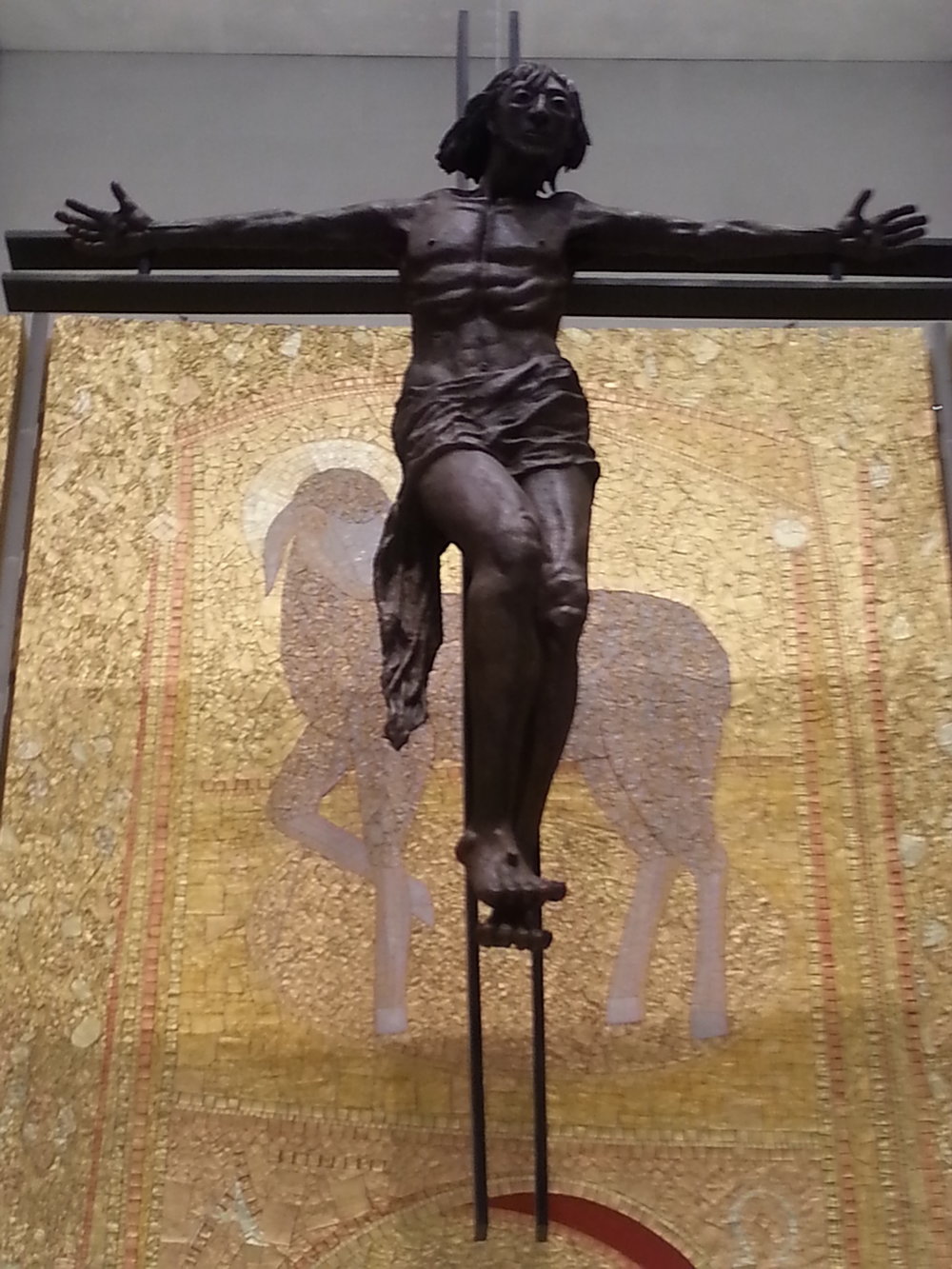 The non-traditional ‘crucifix,’ showing Jesus detached from the cross, located above the Altar/table at the Basilica of the Most Holy Trinity is made of bronze and is over twenty-four feet long.  It displays a Corpus with a comparatively small rib cage area and disproportionately small arms in contrast with its much larger hips and thighs.  It did not look manly to me.  Another person felt that the chest area was too fleshy to be a man.  The “Neanderthal-like face of Our Lord” (as John Vennari once described it) did, however, have a beard. 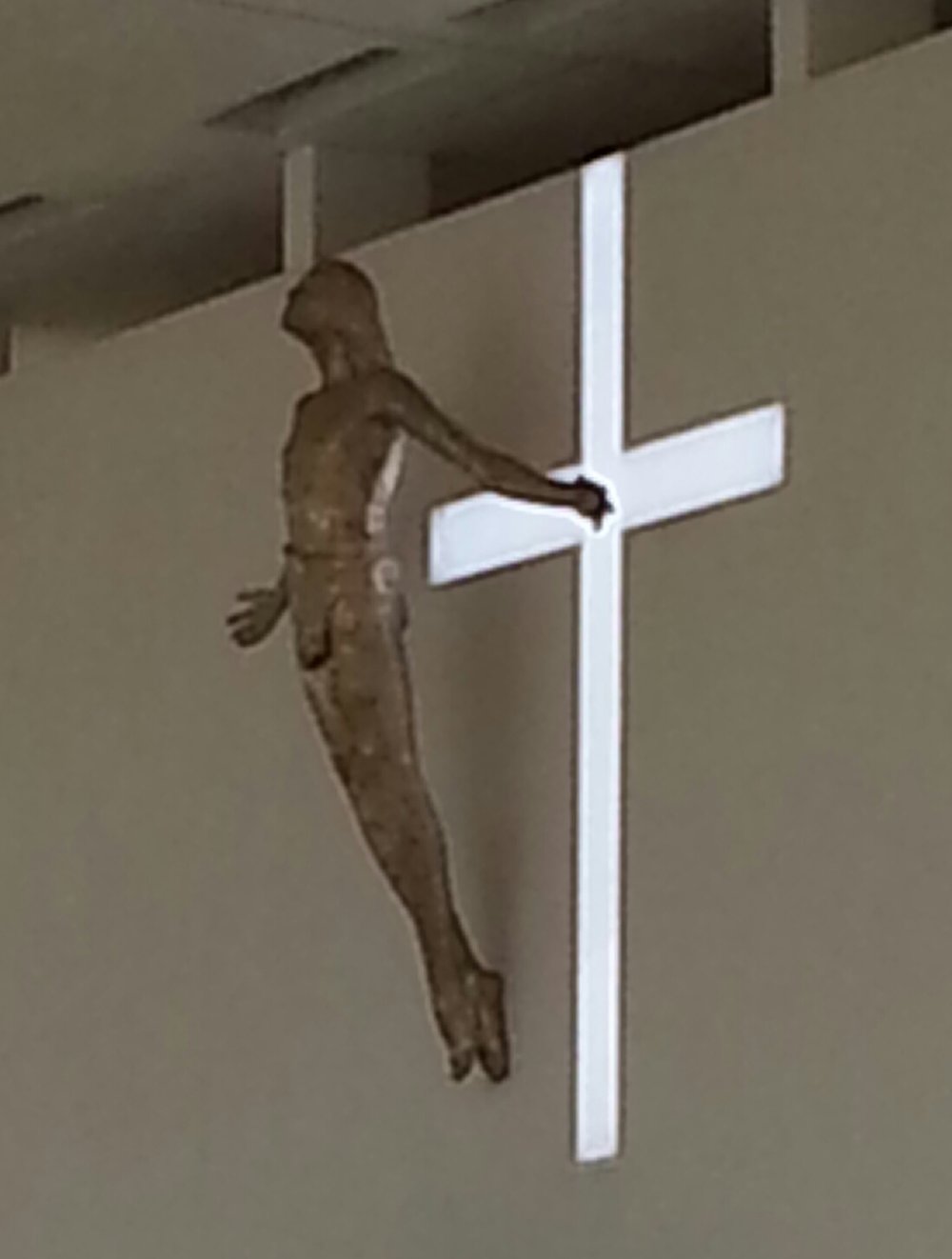 The new ‘crucifix’ on the outside steps of the venerable Basilica of Our Lady of the Rosary is a recent addition that features an unmanly extremely skinny human figure, with effeminate facial, hair and posing features floating away from the cross above and behind the Altar/table.  However these female characteristics are offset by a disproportionately large prominence in a key area of the male anatomy. This is an obscenity; an outrage; and an impious sacrilege – and it is on full display where hundreds of thousands at a time attend outdoor Masses viewing this disgusting spectacle, including during the Papal Mass of May 13, 2017.

Our Lord and God, Jesus Christ, the Son of God the Father, was incarnated as a man; so should He be depicted in art.

The following words of Pope St. Pius X issued on the Feast of the Nativity of the Blessed Virgin Mary (September 8, 1907) in his Encyclical on the Doctrine of the Modernists (Pascendi Dominici Gregis) are an apt conclusion to this article:

“It must, however, be confessed that these latter days have witnessed a notable increase in the number of the enemies of the Cross of Christ, who, by arts entirely new and full of deceit, are striving to destroy the vital energy of the Church, and, as far as in them lies, utterly to subvert the very Kingdom of Christ. Wherefore We may no longer keep silence…” (Pascendi, n. 1 – emphasis added)

Subscribe to Catholic Family News for more articles from Fr. Cizik on his Traditional Latin Mass pilgrimage. Read about the bizarre “crucifixes” at Fatima (“Enemies of the Cross of Christ”) and other works of Modernist art distressing to pilgrims (“Outrages, Sacrileges and Indifference”).