In the past few weeks, three interviews with as many Eminent Cardinals have appeared. The first was granted on October 28, 2017 by Cardinal Walter Brandmüller to Christian Geyer and Hannes Hintermeier of the Frankfurter Allgmeine Zeitung; the second was given on November 14, by Cardinal Raymond Leo Burke to Edward Pentin of the National Catholic Register; the third, of Cardinal Gerhard Müller to Massimo Franco, appeared November 26 in the Corriere della Sera.

Cardinal Brandmüller revealed his concern at the possibility of a division (schism) in the Church. “The very fact that a petition to the Pope with 870,000 signatures asking him for a clarification, remains without a response – as is the case for 50 intellectuals of international rank – raises questions. It is truly difficult to understand.” “Directing Dubia, doubts, questions to the Pope has always been an absolutely normal way to get rid of ambiguities. To put it simply, the question is the following: can something that was a sin yesterday, be good today? One asks, further, if there are really acts – it is the constant doctrine of the Church – which are always, and in all circumstances, morally reprehensible? Like, for example, the fact of killing the innocent, or adultery? That is the point. If one would have to effectively respond “yes” to the first question and “no” to the second, that would in fact, be a heresy, and consequently a schism. A split in the Church.”

Cardinal Burke, who stated that he has remained in regular communication with Cardinal Brandmüller, expressed a new warning on “the gravity of the situation, which is continually worsening” and reaffirmed the necessity of shedding light on all the heterodox passages of Amoris laetitia. We find ourselves, in fact, faced with a process “that is subversive of essential parts of the Tradition.” “Over and above the moral debate, the sense of the ecclesial sacramental practice is increasingly eroding in the Church, especially when it comes to the sacraments of penance and the Eucharist.”

The Cardinal turned again to Pope Francis and to the whole Church, emphasizing “how urgent it is that, in exercising the ministry he has received from the Lord, the Pope should confirm his brothers in the faith with a clear expression of the teaching regarding both Christian morality and the meaning of the Church’s sacramental practice.”

Cardinal Müller, for his part, affirmed that the danger of a schism inside the Church exists, and that the responsibility for the division would not be on the part of the Dubia Cardinals, nor of the signers of the Correctio filialis to Pope Francis, but of the “magic circle” of the Pope, which impedes an open and balanced discussion on the doctrinal problems raised by these criticisms.

“Attention: if the perception of an injustice on the part of the Roman Curia passes, almost by force of inertia, a schismatic dynamic could be put in motion, which will then be difficult to recover. I believe that the Cardinals who expressed doubts about Amoris laetitia, or the 62 signers of a letter of (even excessive) criticisms of the Pope should be heard, not dismissed as “pharisees” or curmudgeons. The only way to get out of this situation, is a clear and candid dialogue. Instead, I have the impression that in the “magic circle” of the Pope, there are those who concern themselves above all, with spying on presumed adversaries, thus preventing an open and balanced discussion. To classify all Catholics according to the categories of “friend” and “enemy” of the Pope, is the worst damage they can cause the Church. One is perplexed when a well-noted atheist journalist boasts of being a friend of the Pope; but at the same time, a Catholic bishop and cardinal such as myself, is defamed as being an opponent of the Holy Father. I don’t believe that these people can teach me theology lessons on the primacy of the Roman Pontiff.”

Cardinal Müller, according to his interviewer, has not yet gotten over “the wound” of his three collaborators having been fired, just before his mandate as head of the Congregation was not renewed last June. “They were good and competent priests who worked with exemplary dedication for the Church,” was his judgement. “People cannot be sent away ad libitum, without proof or a trial, simply because someone anonymously reported one of them as making vague criticisms of the Pope.”

What is the regime under which people are treated in this way? Damian Thompson wrote about it in The Spectator last July 17.

The firing of Cardinal Müller’s collaborators “brings to mind some of his more authoritarian predecessors, or even a Latin-American dictator who embraced the multitudes, and radiated a humble style of life, while his lieutenants lived in fear of his angry outbursts.” This aspect of the pontificate of Pope Francis is now the subject of a book which has just been published with the significant title of Il papa dittatore, “The Dictator Pope”. The author is a historian formed at Oxford, who disguises himself with the pen name “Marcantonio Colonna.” His style is sober and documented, but the accusations toward Pope Bergoglio are strong and numerous.

Many of the elements on which he based himself to formulate his accusations were already known, but what is new is the accurate reconstruction of a series of “historical contexts”: the backstage of Pope Bergoglio’s election, driven by the “Saint Gallen Mafia”; Bergoglio’s Argentinean sequence of events before his election; the obstacles Cardinal Pell encountered for having tried to financially reform the Curia; the revision of the Pontifical Academy for Life; the persecution of the Franciscans of the Immaculate, and the decapitation of the Sovereign Military Order of Malta.

The mass media, ready to disdainfully denounce every episode of misgovernment and corruption, keep quiet about these scandals. The principal merit of this historic study is of having brought them to light. “Fear is the dominating note of the Curia under the law of Francis, together with reciprocal suspicion. It’s not only a case of informers looking for personal gain, reporting a private conversation – as Cardinal Müller’s three collaborators discovered. In an organization in which morally corrupt persons have been left in their posts and even promoted by Pope Francis, sneaky blackmail is the order of the day. A priest in the Curia said with irony: “It’s said that it’s not what you know, but who you know that counts. But in the Vatican it’s like this: “What counts is what you know of who you know.”

Marcantonio Colonna’s book basically confirmed what Cardinal Müller‘s interview hid: the existence of a climate of spying and of informing, which the ex-Prefect of the Doctrine of the Faith attributed to a “magic circle” which conditions the decisions of the Pope, while the Oxford historian referred to a modus gubernandi (manner of governing) of Pope Francis, which he compared to the autocratic methods of the Argentinean dictator, Juan Peron, of whom the young Bergoglio was a follower.

One can respond nihil sole novum, there is nothing new under the sun (Ecclesiastes 1:10). The Church has seen many other deficiencies in government. But this pontificate is truly leading to division among the faithful as the three Cardinals have explained. The explanation cannot be limited to the Pope’s way of governing, but must be sought in something absolutely unprecedented in the history of the Church: the separation of the Roman Pontiff from the doctrine of the Gospel which he has, by Divine mandate, the duty to transmit and to guard. This is the heart of the religious problem of our time.

This article originally appeared on Corrispondenza Romana’s website on November 29, 2017. 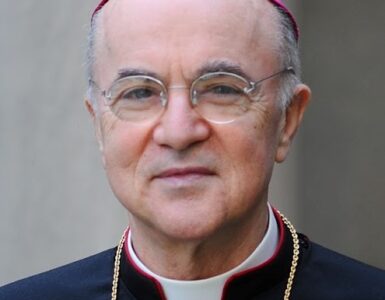 Editors note: Archbishop Viganò has sent us for publication an extensive analysis of the Motu Proprio Traditionis Custodes in which Francis attempts to suppress the Mass of all Ages. After the Archbishop keenly analyzes...

This week’s stories include: (1) More fallout (good and bad) from Traditionis Custodes’ assault on the True Mass, (2) Former cardinal and priest Theodore McCarrick charged with criminal sexual assault of a...

Catholic Family News is pleased to post an announcement of a plea for all Traditional communities to join a consecration to the Immaculate Heart of Mary on August 15. Obviously such an effort will not satisfy Our...