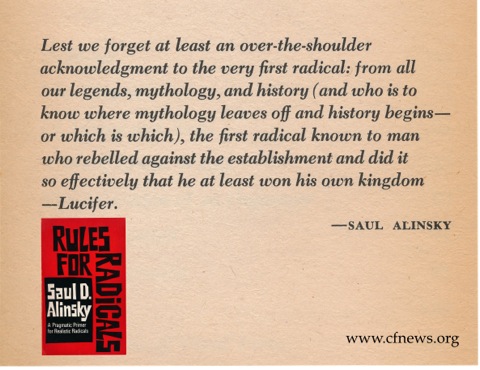 The first Trump-Hillary Debate took place the evening of September 26. No matter what one may think about the ups and downs of the event, there is one fact that stands out clear and firm: we can believe nothing Hillary Clinton says.

This is because Hillary is a devoted disciple of the left-wing radical Saul Alinsky who taught as a foundational principle that the end justifies the means.

Hillary was enamored with Alinsky while in high school and college, communicated with him, considered working with him, brought him in to speak at Wellesley, and wrote her undergraduate thesis on him. “Hillary was magnetically drawn to Alinsky, and he, apparently to her. Alinsky seems to have seen in Hillary a younger version of himself.”1

Alinsky even offered Hillary a job but she declined in order to attend Yale Law school.

In 1971, Alinsky published what is to this day his most popular and influential book: Rules for Radicals, A Pragmatic Primary for Realistic Radicals.

The book opens with Alinsky’s infamous epigraph to the devil. Here Alinksy writes:

“Lest we forget at least an over-the-shoulder acknowledgement to the very first radical; from all our legends, mythology, and history… the first radical known to man who rebelled against the establishment and did it so effectively that he at least won his own kingdom – Lucifer.”2

Alinsky lays out his foundational principles in the first chapter of the book. Alinsky claims:

1) There is no such thing as dogma, all truth is relative;

2) There is no such thing as a fixed rule of ethics, the end justifies the means;

3) Corruption in the leader is a kind of virtue.

Many conservative commentators make the mistake of opening directly to Alinsky’s chapter on his “Tactics” inRules for Radicals, but to do so is to miss the even more corrupt and cynical foundational principles on which he operates – and by extension – by which his disciples operate. Two of his most famous disciples are Barack Obama3and Hillary Clinton. As students of Alinksy, these perverse foundational principles are Obama’s and Clinton’s central modes of operation – and it shows.

We will quote Alinsky directly on the three points.

1) He begins Rules for Radicals with an attack on all dogma (in other words, objective truth). As early as page 4 we read, “Dogma is the enemy of human freedom. Dogma must be watched for an apprehended at every turn and twist of the revolution.”4 He glorifies doubt and the supposed relevance of truth.

2) Logically following the rejection of all dogma, Alinsky believed and taught as a principle that there is no such thing as a fixed morality or ethic. He said, “Ethical standards must be elastic to stretch with the times.”8

3) Worse, Alinsky elevates corruption of the leader to a kind of virtue.

“The man of action views the issues of means and ends in pragmatic and strategic terms,” says Alinsky. “He asks for ends only. Whether they are achievable and worthy the cost of means, only whether they will work. To say that a corrupt means corrupt the ends is to believe in the immaculate conception of ends and principles. The real arena is corrupt and bloody. Life is a corrupting process. He who fears corruption fears life.”9

He even mocked those insist on proper ethics, saying such people “end up on the ends without any means.”11 He later insists, “moral rationalization is indispensable to justify the selection or use of ends or means.”12

Thus for Alinsky, the Ten Commandments, the law of Christ and the natural moral law do not count. Ethical standards must be elastic to stretch with the times. He closes his chapter on “Ends and Means” stating that the only question that must be asked is: “Does this particular end justify this particular means?”13

This is the school in which Barack Obama was formed, and the school of radical principle principles on which Hillary Clinton operates:

2) No fixed standards of ethics, the end justifies the means;

3) Corruption in the civic leader is a kind of virtue.

This alone indicates that we can believe nothing HiIlary Clinton says. As a disciple of Alinsky, she will hold there is no objective truth, the ends justifies the means, and there is no fixed standard of ethics. She will be as ruthless and dishonest as the situation warrants. If she believe it necessary to lie, she will lie. If it is in her advantage to cheat, she will cheat. If she must crush someone who gets in the way, she will crush.

These characteristics of Hillary are well known to anyone who has eyes to see.

Even Camille Paglia, a leftist lesbian intellectual who happens to think for herself in a number of areas, recently denounced Hillary as “utterly corrupt,” “absolutely soulless” and “incompetent.”14

Now that we have laid out Alinsky’s immoral foundational principles, we turn to his infamous thirteen Rules for Radicals.

“Tactics” is one of Alinsky’s most important chapters, wherein he lists the primary “rules for radicals.” It is important to know these as Hillary the Alinsky disciple will employ them at every opportunity.

Rule #1) Power is not what you have, but what the enemy thinks you have.

It is important to make the enemy believe you are a mighty organization.

Rule #2) Never go outside the experience of your people.

If a tactic is outside of their experience, they are uncomfortable with it, which results in confusion, fear and retreat. All communication breaks down and the tactic may collapse.

Rule #3) Whenever possible, go outside the experience of your enemy

Going outside the experience of your enemy always disorients him. Use this tactic at every opportunity. Alinksy gives numerous examples of how this works, including General Sherman’s Civil War “March to the Sea” where Sherman deliberately made war against the property of southern civilians – destroyed their homes, killed their livestock. This was completely foreign to the civilian’s experience and devastated them.

Alinsky also says he once walked around a block in Los Angeles calmly offering everyone he saw a free $10.00 bill. Everyone jumped back from him as if he were insane; no one took the money. He did this to demonstrate that when something is outside the experience of people, they do not know how to react.15

Rule #4) Make the enemy live up to their own book of rules!

Alinsky says you can kill them with this, because they probably cannot do it.

It is almost impossible to counter-attack ridicule, he says, and it infuriates the opposition who react to your advantage.

Rule #6) A good tactic is one that your people enjoy.

He says the best tactics are the ones that your people have great time doing. If they people do not enjoy it, or are uncomfortable with it, there something wrong with the tactic.

Rule #7) A tactic that drags on too long is a drag.

Tactics call for change and creativity.

Rule #8) Keep the pressure on.

Keep it up with different tactics and actions.

Rule #9) The threat is usually more terrifying than the thing itself.

Rule #10) The major premise for tactics is the development of operations that will maintain constant pressure upon the opposition.

Rule#11) If you push a negative hard and deep enough it will break through into its counterside.

Rule #12) The price of a successful attack is a constructive alternative.
Do not be caught ill-prepared if your opposition asks what you want. Have your alternative plan in place and ready from the beginning.

Rule #13) Pick the target, freeze it, personalize it, and polarize it.16

These “Rules for Radicals” reflect the true calibre of the pro-abortion, anti-Christian Hillary Rodham Clinton. She will employ dishonesty and ruthless tactics as the situation warrants.

It is a sad fact that most people expect politicians to lie. But for Hillary, lying, the ends justifies the means, and the rejection of objective moral law are central principles on which she functions. 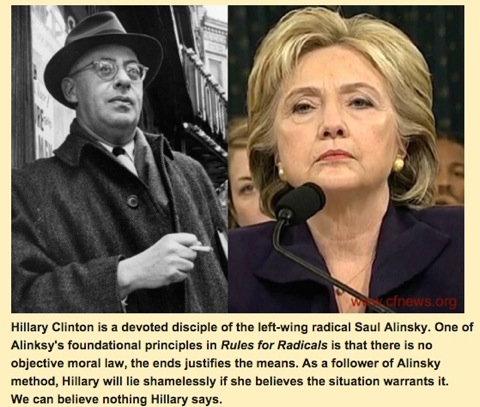