The apparitions at Fatima started with the apparition of an Angel in Spring, or early summer, of 1916.

The children: Jactina age 6, her brother Francisco, age 8 and their cousin Lucia age 9, were playing in the hill country of Portugal.

Suddenly, the children saw “a light whiter than snow in the shape of a transparent young man, who was more brilliant than a crystal struck by the rays of the sun.”

Lucy said: “As he approached, we began to see his features. He was a young man of great beauty, about fourteen or fifteen years old. We were surprised and ecstatic. We did not utter a word.”

He stopped in front of the children and said, “Fear not. I am the Angel of Peace. Pray with me.” The angel prostrated himself, his forehead touching the ground. The three children instinctively imitated him, and repeated the angel’s prayer three times:

“My God, I believe, I adore, I hope, and I love Thee! I ask pardon for all those who do not believe, do not adore, do not hope, and do not love Thee!”

What is the first thing the angel taught the children? A prayer of reparation!

He rose and said, “Pray thus. The Hearts of Jesus and Mary are attentive to the voice of your supplications.” Then he disappeared. Sister Lucy says he left a “supernatural atmosphere”. The children told no one what they had seen.

The Angel returned in mid-summer. The children, after sheltering their sheep against the hot sun, were lounging in the shade of a fig tree. Lucy says:

“Suddenly, we saw the angel right beside us.” And the angel admonished them:

“What are you doing? Pray, pray very much! The Holy Hearts of Jesus and Mary have merciful designs concerning you. Offer prayers and sacrifices constantly to the Most High!”

Lucy asked, “How must we sacrifice?”

“Offer God a sacrifice of anything you can as an act of reparation for the sins with which He is offended, and as a supplication for the conversion of sinners. Draw peace upon your country by doing this. I am its Angel Guardian, the Angel of Portugal. Above all, accept and endure with submission whatever suffering the Lord sends you.”

Again, the children told no one what they had seen.

Then in the Fall of 1916 an angel appeared to the children for the third and last time. He found them prostrate in a rocky hollow in the hills, praying the prayer he had taught them on his first visit.

Lucy writes in her Memoirs: “An extraordinary light shown upon us. We sprang up to see what was happening, and [we] beheld the Angel. He was holding a chalice in his left hand, with the Host suspended above it, from which some drops of blood fell into the chalice. Leaving the chalice suspended in the air, the Angel knelt down beside us and made us repeat three times:

“Most Holy Trinity, Father, Son, and Holy Ghost, I adore Thee profoundly, and I offer Thee the Most Precious Body, Blood, Soul, and Divinity of Jesus Christ, present in all the tabernacles of the earth, in reparation for the insults, sacrileges, and indifference with which He is offended. And through the infinite merits of His Most Sacred Heart, and of the Immaculate Heart of Mary, I beg Thee for the conversion of poor sinners.'”

The angel rose and gave the Sacred Host to Lucy, which she consumed. He gave the chalice to Francisco and Jacinta, saying: “Take and drink the Body and Blood of Jesus Christ, who is horribly insulted by ungrateful men. Make reparation for their crimes and console your God.”

After Communion the angel and children prostrated themselves and repeated three times the “Most Holy Trinity” prayer. The angel disappeared, but the children remained prostrate in prayer for hours afterwards.

The said they felt a strong supernatural atmosphere.

For some reason Francisco, who had been present at all three apparitions, had been unable to hear the angel’s words.

Lucy, Francisco, and Jacinta attended morning Mass at St. Anthony’s parish in Fatima. Afterwards they herded their sheep towards the hills to the Cova. They tended the sheep, ate lunch, prayed the rosary, and then started play they started to make a house out of a thicket. 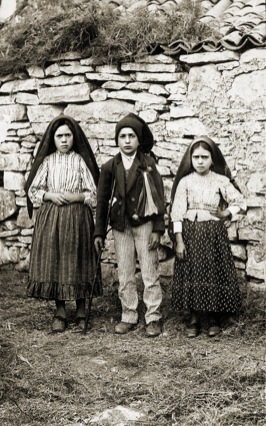 Lucy, Francisco, and Jacinta were standing in front of a holm oak tree, a small evergreen with glossy, sharp foliage that stood about three feet high. On top of the tree, as if resting upon it, was a ball of light. In the center of the ball of light stood a Lady.

Lucy says, “She was all dressed in white, more brilliant than the sun, and radiated a light more clear and intense than a crystal glass filled with sparkling water, pierced by the burning rays of the sun.” Our Lady wore a white tunic. A white veil edged with gold covered her head, hiding her hair … and descending to her feet. Her hands were pressed together over her breast in prayer, and a rosary hung from her right hand.

“Do not be afraid. I will not harm you,” said the Lady.

Again: Lucy and Jacinta heard her, Francisco did not. Jacinta did not speak to the Lady, only Lucy did.

“Where does Your Grace come from?” she asked.

“From heaven,” the Lady replied.

“What does Your Grace want from me?” Lucy asked.

The Lady answered: “I have come to ask you to come here for six months in succession, on the thirteenth day, on this same hour. Later I will tell you who I am and what I want. Afterwards, I will return here yet a seventh time.”

“Shall I go to Heaven too?

“Yes, but he will have to say many Rosaries”.

This makes us think – he was only nine years old.

Lucy asked about two older girls she knew who had recently died. The Lady said one was in heaven (p.16) the other “will be in Purgatory until the end of the world. (Pp.18-20)” Then the Lady asked:

“Are you willing to offer yourselves to God to endure all the sufferings He may be pleased to send you, as both an act of reparation for the sins with which He is offended, and an act of supplication for the conversion of sinners?”

The Lady said, “Then you will have much to suffer. But the grace of God will be your comfort.”

At these last words the Lady opened her hands for the first time. From them came (says Lucy) “a most intense light that penetrated our breasts reaching the innermost part of our souls, and making us see ourselves in God, who was that light,”

Lucy said later: “Moved by an inward impulse, the three children spontaneously knelt and prayed: ‘O most holy Trinity, I adore Thee! My God, My God, I love Thee in the Most Blessed Sacrament’.”

The Lady waited for them to finish the prayer, then said, “Pray the Rosary every day to obtain peace for the world and the end of the war.” Then rising in the air and moving eastward, “she disappeared in the immensity of space.

The children promised each other not to say anything to anyone. But as soon as Jacinta got home, she blurted it out to her family almost immediately. When Lucia’s mother heard, she was horrified. She did not believe the story. Lucy suffered greatly because her mother claimed that Lucy had made up the story and scolded Lucy for being a liar. Within hours, Our Lady’s prophecy comes to pass: “You will have much to suffer.”

The next installment will be posted June, 13, 2016.
* The is from a speech on the basic story of Fatima, given at Fatima Center conferences in Tui (Spain), Brazil, India and Rome. 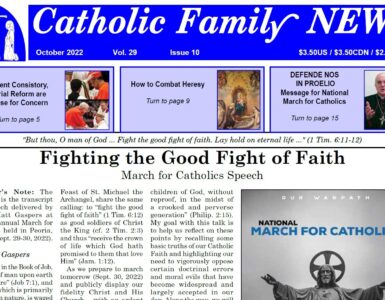