Catholics the world over are scandalized by the latest manifestation of Conciliar aberration-ism. It is the above video, released by Pope Francis, for his prayer intentions for January – a pan religious celebration of all the world’s religions wherein Francis calls for more dialogue, and claims we – members of every religion – are all “children of God.”[1]

Of course, there is no call for conversison of non-Catholics to the one true Faith.

The video generated much discussion on social media sites, Catholics denouncing the presentation as heretical and modernist. Yet one priest, perhaps well-meaning, seemed puzzled about all the upset: “Sorry,” he said, “what precise statement is heretical? I don’t see any statement claiming all religions are equal (pluralism)?”

Here is the key to understand what is truly at work.

Modernism seldom operates with “precise statements that are heretical.” Its method is one of praxis – of a new approach of action that conflicts with the perennial magisterium.

Today’s interfaith activities give the appearance that all religions are good enough for salvation, which is probably the principal religious error of our time. People around the world see John Paul II and Pope Benedict XVI at interfaith prayer gatherings at Assisi, standing side-by-side with Buddhists, Hindus, Rabbis, Muslims, Protestants, and conclude that any religion are more or less in an acceptable to God. It is a visual expression of religion indifferentism that leads souls to absorb the heretical doctrine.

Just one example: On the day of Pope John Paul II’s death, I received a phone call from a young lady in New Zealand, a friend of the family. She worked in a situation where she interacted with Muslims and Hindus. When she told these non-Catholics, with gentleness and charity, they must convert to the one true Catholic Church to save their souls, the Muslims and Hindus laughed at her. “Your Pope doesn’t believe that”, they cackled, referring to John Paul II, “Your Pope doesn’t teach that. Your Pope’s interfaith actions don’t convey that. Your Pope prays with the Dalai Lama and with Hindus. Your Pope visits mosques and kisses the Koran. You are out-of-step with your own Pope. Why should we listen to you?”

Here we see the elevation of new hetero-praxis over doctrine, that leads the individual to think along the lines of heretical doctine.

This is the same tactic the progressivist employed at the recent Synod – advocating changing the practice of divorce and remarried receiving Communion, and then repeating only what the most naïve would accept: “but we haven’t changed doctrine!”

Have we learned nothing over the past 50 years? The entire Vatican II revolution was based on the tactic of the elevation of the “pastoral” over the “doctrinal,” without explicitly changing doctrine, but nonetheless creating a revolution in Catholic attitudes.

Another tactic of Modernism and of the Conciliar revolution, is significant silence on those points of doctrine that defy the new orientation – in the words of the eminent Father Edward Hanahoe, the ecumenists “pretend the magisterium has not spoken.”

Never will you hear the Concliar Popes, from John XIII to the present, reiterate the clear condemnation of religious indifferentism as we find in Mirari Vos of Pope Gregory XVI:

“Now we come to another very fertile cause of the evils by which, we are sorry to see, the contemporary Church being afflicted. This is indifferentism, or that wicked opinion which has grown up on all sides through the deceit of evil men. According to this opinion, the eternal salvation of the soul can be attained by any kind of profession of faith, as long as a man’s morals are in line with the standard of justice and honesty. You must drive out from the people entrusted to your care this most deplorable error on a matter so obviously important and so completely clear. For, since the Apostle has warned that there is one God, one faith, one baptism, those who pretend that the way to [eternal] beatitude starts from any religion at all should be afraid and should seriously think over the fact that, according to the testimony of the Savior Himself, they are against Christ because they are not for Christ; and that they are miserably scattering because they are not gathering with Him; and that consequently, they are most certainly going to perish forever, unless they hold the Catholic faith and keep it whole and inviolate”.

“Pretend the magisterium has not spoken,” and the elevation of hetero-praxis over doctrine are two principal modernist tactics of the Conciliar revolution.

POSTSCRIPT: Lest we forget, pan-religious activity was encouraged by all the conciliar Popes, including Pope Francis’ immediate predecessor. To give just one instance, interfaith orientation was on full display during the Pontificate of the allegedly conservative Pope Benedict XVI. See my report (link below) from when I attended Pope Benedict’s pan-religious gathering at Assisi in 2011. This was the type of activity that further laid the groundwork for Pope Francis’ bolder approach.

At 2011 Assisi event, Nigeria’s Professor Wande Abimbola, representative of the African Yoruba religion, took to the pulpit while members of the world’s religious shared the Sanctuary of the Assisi Church of the Holy Angels with Pope Benedict. Abimbola sang a prayer and shook a percussion instrument as he told the delegates that peace can only come with greater respect for indigenous religions. “We must always remember that our own religion, along with the religions practiced by other people, are valid and precious in the eyes of the Almighty, who created all of us with such plural and different ways of life and belief systems,” he said. 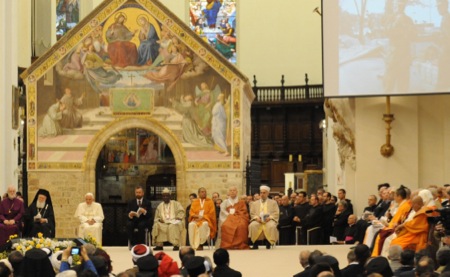 Notes:
1. Strictly speaking, Francis’ unqualified claim that Catholics and members of all religious are “children of God” is a departure from true Catholic doctrine. Scripture tells us that without Baptism we are children of wrath. “For we are by nature children of wrath.” (Eph. 2:3). We are only brought into the family of God by Baptism and membership in the one true Church established by Christ, the Catholic Church. This is the perennial Catholic doctrine Pope Francis sacrifices on the altar of a bogus conciliar ecumenism.